Please ensure Javascript is enabled for purposes of website accessibility
Log In Help Join The Motley Fool
Free Article
Join Nearly 1 Million Premium Members And Get More In-Depth Stock Guidance and Research
By Daniel B. Kline – May 17, 2015 at 12:35PM

The star quarterback has left some dollars on the table both on and off the field over the course of his career, and his net worth may surprise you.

While New England Patriots Quarterback Tom Brady should at least be in the conversation when you discuss the greatest players of all time at the position, he has generally not been the highest paid.

Despite winning four of the six Super Bowls in which he has played, Brady has continually been willing to renegotiate his salary in team-friendly ways. In 2013, two years into a four-year, $72 million deal, he signed a new agreement that "was substantially less than his market value," according to CBS Sports.

Of course, Brady has still been very well paid. From 2013-2015 he is scheduled to receive $30 million in signing bonus alone, according to the sports news site. In 2014, the QB gave up $24 million in guaranteed salary for the 2015 through 2017 seasons in exchange for a non-guaranteed $27 million as part of a complicated transaction that prevented the team from having to keep his entire guarantee in escrow.

The move was unprecedented but typical of a player who has never striven to max out his contracts at the expense of his team.

Brady also clearly knows his off-field value is made higher by the fact that the Patriots win so much. By taking a little less and being willing to rework his contract repeatedly, this sixth-round draft pick maximizes his endorsement value -- though he oddly hasn't grabbed every dollar there, either.

In addition to being one of the all-time greats on the field, Brady has been very savvy in amassing his fortune. He makes plenty of money as a quarterback, but has also been very clever about maintaining his image (at least to his New England fan base) which could have more value to him when his playing days are over.

A breakdown of the Brady fortune
Brady may be one of the most celebrated rags to riches stories in NFL history. He was not even a consistent college starter before being taken by the Patriots in the sixth round of the 2000 draft. He made the team that first year as a fourth-string player being paid the league minimum. Even when he he took over for Drew Bledsoe in 2001 and led the team to an improbable Super Bowl victory, Brady was still on his low-paying (by pro sports standards) rookie deal.

As his on-field fortunes rose, so to did his salary. Brady eclipsed $1 million in on-field earnings in 2002 and mostly rose steadily in the following years. NFL contracts are more than a little confusing, with how the money is paid out varying from year to year mostly to manipulate the league's salary cap. Brady's earnings are charted out below; while they are impressive, they are well less than what some peers such as Peyton Manning earned. 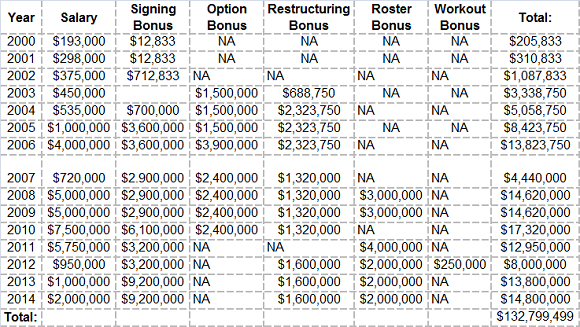 Tom Brady off the field
While Brady makes an estimated $7 million a year in endorsements from companies including Movado, Under Armour, and his much-mocked deal with Uggs, according to CNBC, he has been selective in his off-field work. Brady comes in below Manning, who makes $12 million annually (though he's in so many ads, it's surprising it's not more), and NFL players generally don't do as well as athletes in other sports.

"The median income of golf's top 50 players was $5.2 million away from the course -- almost what the NFL's golden boy makes," according to CNBC, which the article theorized was simply due to NFL players plying their trade under helmets.

Brady, of course, could likely make more off the field than he does, but he apparently chooses not to. That's, of course, a choice made a bit easier when you're married to supermodel Gisele Bundchen, who Forbes estimated made $47 million on her own in 2014.

What is Tom Brady's net worth?
Pinning down any celebrity's net worth is a bit dodgy, because things like investment income or bad deals to buy islands or alpaca farms, or to fund vanity film projects are not public. But both Celebrity Net Worth and The Richest -- two websites dedicated to ferreting out how much famous people are worth -- peg Brady's fortune at similar numbers. The former said Brady is worth $120 million, while the latter had the figure a bit higher at $131 million.

That's in line with other online estimates and seems reasonable, particularly given that it is a bit difficult to unwind Brady's finances from those of his wife. A second Celebrity Net Worth story pegged their joint fortune at $410 million, which includes multiple homes in the Boston area and on the West Coast.

Of course, Brady is not done making big money. While his current contract will "only" pay him $8 million this year (some of which he could lose if his suspension for his role in allegedly deflating footballs last year holds up) he will add to his fortune for at least the next few years. The QB, who has said he intends to play into his 40s, has a $9 million deal for 2017 and a $10 million contract for 2018.

Why Cimpress Stock Was Falling Today
397%