Please ensure Javascript is enabled for purposes of website accessibility
Log In Help Join The Motley Fool
Free Article
Join Nearly 1 Million Premium Members And Get More In-Depth Stock Guidance and Research
By Daniel Sparks – May 18, 2015 at 8:41AM

Looking back at yet another year as a public company, Facebook continues to impress.

Three years later and 114% higher, the story behind Facebook stock's market-crushing returns remains as intriguing as ever.

Mobile domination persists
One of the biggest concerns when Facebook went public was whether or not growing mobile usage on the platform could be monetized effectively. After all, not a single social company had meaningfully monetized a mobile user feed at that point.

Facebook's MAUs continue to climb at considerable rates today. In the company's most recent quarterly report, the social network said it had 1.44 billion monthly active users, up 13% from the year-ago quarter. The growth of Facebook's most valuable users, its mobile DAUs, has been even more astounding. Mobile DAUs hit 798 million in Q1, up 31% from the year-ago quarter.

The continued growth in Facebook's MAUs highlights the social network's success at appealing to markets beyond the U.S., Canada, and Europe. Facebook's fastest growing geographic segments when measured by users are its Asia-Pacific and Rest of World segments, hitting 471 million and 453 million monthly active users, respectively, in Q1. 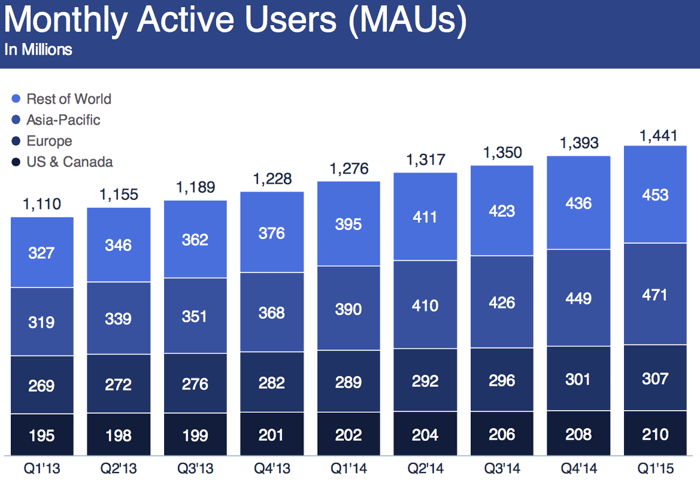 Facebook's user figures do not include its Instagram and WhatsApp users. These social apps are smaller than the company's core Facebook platform, but growing rapidly.

WhatsApp MAUs are fast approaching Facebook MAUs, recently hitting 800 million. Instagram is further behind, though still a substantial platform. The photo-sharing app boasts 300 million MAUs. These figures are up significantly from WhatsApp and Instagram's reported 500 million and 200 million monthly active users in the year-ago quarter.

While the social network's $1 billion Instagram acquisition looks poised to pay off in the near future, with the company finally rolling out advertisements on the platform and management saying the engagement of these ads is high, the outcome for WhatsApp and Oculus is less certain.

WhatsApp, a multi-platform Internet-based messaging service, which Zuckerberg said he does not plan to integrate with Facebook, only charges users $1 per year after the first year, which is free. Whatsapp has a strict "no ads" policy.

Virtual-reality company Oculus is still in the developmental stages, planning to ship its Rift goggles in the first quarter of next year.

Of course, investors weren't supposed to see any big payoffs from these acquisitions yet. Zuckerberg has emphasized from the start that these acquisitions, particularly WhatsApp and Oculus, were long-term bets. But investors should at least look for the markets for these products to begin to develop during the next year, offering glimpses into how Facebook will get its money's worth out of these businesses.

It's undoubtedly been a great year for Facebook. In the trailing 12 months, the social network's revenue and EPS jumped 58% and 83%, respectively, compared to the prior 12 months. During the last 12 months, Facebook stock has soared 42%.