Intel (NASDAQ:INTC) has talked a lot about the density of its 14-nanometer chip manufacturing technology relative to competing technologies from rivals Samsung (NASDAQOTH: SSNLF) and TSMC (NYSE:TSM). In particular, Intel will tell you that its 14-nanometer process offers better density.

I would say, based on published gate pitch and metal pitch metrics, as well as high-density SRAM cell sizes from all three chipmakers, Intel is correct.

However, density is just one aspect of a chip manufacturing technology; the structure of the transistors themselves are important in determining a chip's performance. Intel will tell you that its competitors are still trying to get their first-generation FinFET transistors working while it has already advanced to its second-generation technology.

Let's look at the images 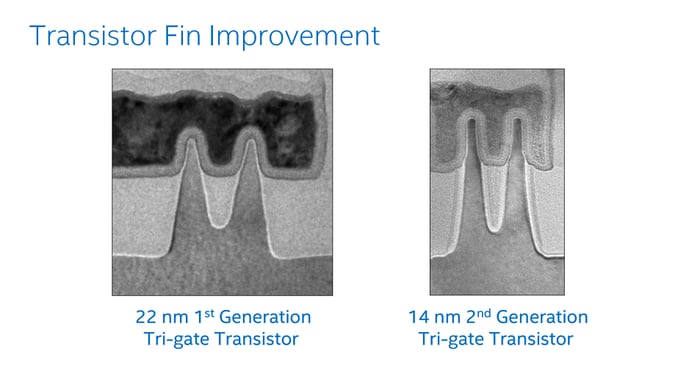 Notice that the 22-nanometer transistor fins have "sloped" walls while the 14-nanometer fins look more vertical. According to Intel, making the fins taller and thinner improves transistor drive current and performance.

Now, look at this image from TechInsights of Samsung's 14-nanometer FinFET transistors: 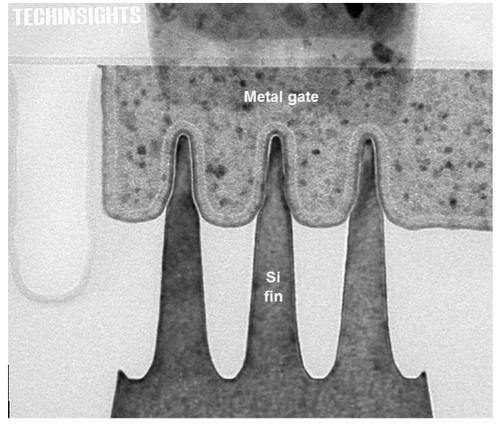 The foundries are certainly making progress
It's pretty clear at this point that both foundries -- Samsung and TSMC -- are running very quickly in an attempt to close the technology gap with Intel. I still think Intel has a "lead" over its competitors, but it's important for Intel investors to keep an eye on the foundries' advances.

If Real World Tech's David Kanter is right that Intel plans to shift to Quantum Well FinFETs at the 10-nanometer node, then this advance, coupled with Intel's stated density goals for 10-nanometer, should give it an obvious technology lead over the competition. If that's not the case, then getting a handle on the competitive environment could be much more involved.