Please ensure Javascript is enabled for purposes of website accessibility
Log In Help Join The Motley Fool
Free Article Join Over 1 Million Premium Members And Get More In-Depth Stock Guidance and Research
By Chris Neiger - May 18, 2015 at 6:20PM

Both companies are pushing further into the Internet of Things in their own way, but only one is making the bigger IoT bet.

Both Intel (INTC 2.46%) and Samsung (NASDAQOTH: SSNLF) see the IoT's opportunity, and both have made significant moves in the space. But which company is in the best position to benefit? Let's take a quick look at each companies' Internet of Things strategy to find out.

What Samsung's doing
The South Korean-based company's latest Internet of Things move came last week when it announced its new Artik processor and circuit boards. Samsung's selling the boards for use in IoT devices like smartwatches and connected home hubs and says it'll use them in its own products as well. Samsung's already committed to having 90% of its devices connected to the Internet of Things ecosystem in the next two years.

But getting other companies to get on board with the IoT is part of Artik's focus. The cheapest boards sell for as little as $10, and can be used in small Internet of Things devices like smartwatches. Because of the low price point for some of the Artik hardware, Samsung will sell software and services that mange the Artik's IoT connections.

To help spur companies into adopting IoT tech, Samsung CEO, BK Yoon, pledged $100 million to Samsung's developer network to help create open standards for the Internet of Things back in January. This move, along with the Artik hardware release should continue to lower the barrier for large and small companies looking to create Internet of Things connected devices.

But it's not the only IoT move Samsung's made. The company's also focusing its attention on connected homes and wearable devices. Last year, Samsung bought SmartThings, which makes connected-home hubs and devices, and also sold etched out a lead in the smartwatch space by selling with 1.2 million smartwatches.

And while Samsung has already entered the IoT on several fronts, Intel is making big Internet of Things bets as well.

What Intel's doing
After missing much of the mobile market with its chips, Intel is bent on staying ahead of the next big technology trend. So to sure up its position in IoT, the company launched its small Quark processor and Edison development board for IoT devices last year. Already Intel's Quark processor has been used in smart city projects for the city of San Jose, where Intel's tech helps measure pollutants in the air, improve traffic patterns and manage utilities.

The company also recently teamed up with Accenture, Dell, SAP, and others to create an Internet of Things platform so that companies can create IoT compatible devices quickly. 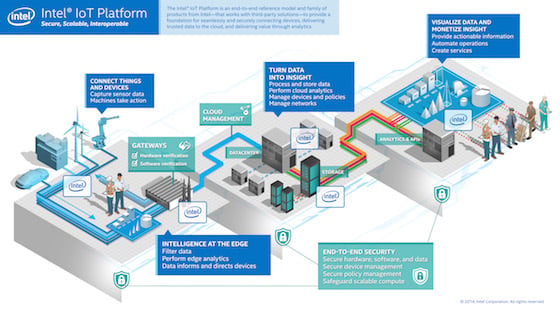 But one of Intel's biggest IoT moves came in February when it bought German chipmaker and home networking company, Lantiq. The company makes semiconductors and software for wireless carriers and companies to connect homes to the Internet using networking gateways. Intel's looking to use Lantiq's technology to better position itself in the connected-home market, which is expected to be worth $58.68 billion by 2020, up from about $20 billion last year.

So far, Intel's IoT ambitions are already paying off. In 2014, the company's Internet of Things division generated $2.1 billion in revenue -- slightly less than the company's software and services revenue and far outpacing its $202 million in mobile revenue.

If I had to choose one ...
While I think Samsung will become a leader in the Internet of Things space just as it did in mobile, I think investors have more opportunity with Intel's IoT ambitions.

The company is betting big on the Internet of Things because it can't afford to miss this trend like it did with mobile. Right now Intel's IoT segment is the company's third-largest revenue generator and fastest growing business.

When you add up all of Intel's current Internet of Things prospects and factor in the company's motivation not to miss another major tech trend, I think investors would be wise to give Intel a close look for Internet of Things exposure.

Chris Neiger has no position in any stocks mentioned. The Motley Fool recommends Apple and Intel. The Motley Fool owns shares of Apple. Try any of our Foolish newsletter services free for 30 days. We Fools may not all hold the same opinions, but we all believe that considering a diverse range of insights makes us better investors. The Motley Fool has a disclosure policy.