Here are two industries where the highest dividend stocks can be found. With dividend yields in excess of 10% per year, these stocks offer opportunity for those who have a stomach for risk.

Eighty-four percent of S&P 500 stocks paid a dividend in the last 12 months, according to FactSet. Most pay a mere pittance, as the entirety of the index only yields 1.9%.

Investors who want higher yields can do better. Some stocks in the financial industry yield more than 10% per year, but they come with certain unique risks. Let's consider the risks and rewards in two of the highest-yielding industries on the market today: business development companies and mortgage REITs.

Business development companies
The BDC industry is chock-full of stocks that yield 8%-13% per year, but for good reason: BDCs are required by law to distribute 90% of their earnings to shareholders. In doing so, these companies do not have to pay corporate-level taxes on their earnings.

In general, business development companies are cyclical. They generate earnings by making debt and equity investments to support corporate buyouts. In the past, banks were the primary facilitators of debt-heavy buyouts. In this post-financial crisis world, regulators have cracked down, making nonbank lenders such as BDCs the main source of debt financing for private equity firms and strategic buyers alike.

Leveraged loans are best understood as "cash flow" loans. They aren't backed with significant hard collateral. Rather, cash flow loans are backed only by the borrower's ability to generate profits to repay the debt.

These loans are inherently more risky than other types, but the upside comes in the form of higher interest rates. Business development companies often earn 10% or more annually on their loans, an interest rate that is well above the 3% yield on AA corporate bonds and even higher than the 6% yield on junk bonds.

When the economy is growing, BDCs earn huge returns because defaults are few and far between. But in a downturn, losses mount quickly because their investments have little or no collateral backing their value

Ares Capital Corp. is one of the most respected BDCs, having survived and thrived during and after the 2008 financial crisis. However, neither its dividend nor its share price were spared from economic carnage. From its pre-crisis peak in 2007 to its trough in 2009, Ares Capital shares shed nearly 75% of their value. 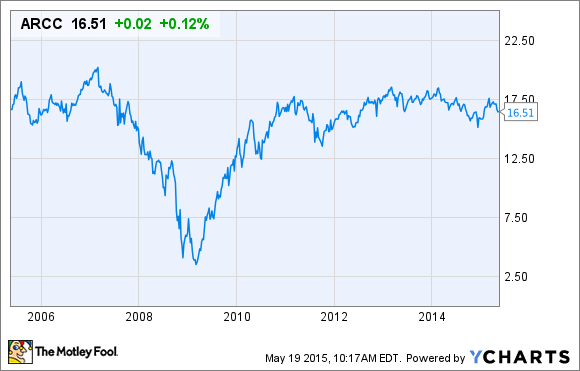 The company's stock price ultimately recovered, and its dividend has returned to the rate it was paying before the financial crisis, but Ares Capital was an exception, not the rule. In some ways, BDCs are akin to picking up pennies in front of steamrollers. In an economic downturn, capital losses can quickly erase years of dividends, so you'll need a strong stomach to buy into this highly cyclical industry.

Mortgage REITs primarily use inexpensive, short-term financing to buy higher-yielding, long-term mortgage securities. An mREIT might pay just 1% to borrow capital it can then invest in 15-year mortgages that yield 2.5% per year. The spread between the borrowing costs and the investment yields is the profit.

Consider this: 85% of American Capital Agency's debt funding has a fixed rate, locked in for an average of 164 days, or roughly five months. Its investments, however, consist primarily of fixed-rate mortgages with a term of 15 to 30 years. Thus, if rates rise, American Capital Agency's funding costs will increase much faster than the yields on its portfolio. Its spread will shrink, and profitability will suffer as a result.

Mortgage REITs use hedges to reduce their interest rate exposure, but as hedges are added, profits fall. It's simply impossible to hedge every single risk and generate a return. There is simply no such thing as a risk-free, 12% dividend yield. If you believe rates will rise, and rise quickly, mREITs probably aren't the right investment for you. But in periods of declining rates, mortgage REITs practically mint money.

Are BDCs or mREITs right for you?
Should you venture into the world of super-high-yielding stocks, know that these stocks are not to be treated as a bond substitute. The risks, and the rewards, are more closely related to stock investments than to debt investments, and should never be used to displace low-risk but low-yielding bonds.

Furthermore, the highest-dividend stocks offer the largest yields because they pay out almost all of their earnings. Thus, it would be safe to assume a dividend cut is always right around the corner, since any small decrease in earnings will naturally result in a lower payout. Additionally, as virtually all these companies' earnings flow out as dividends, the returns will almost always come from the dividend -- don't expect any meaningful capital gains over the long haul.