Cliffs Natural Resources Inc (NYSE:CLF) has been hurting. So have its shareholders. Now the iron ore miner is trying to address some of its issues by divesting its coal operations. That's not a bad idea, but it won't solve Cliffs' biggest problem.

Red ink galore
For five consecutive quarters Cliffs Natural Resources has been bleeding red ink on the bottom line. It's not surprising, then, that its shares have lost about two-thirds of their value over the past year. This is a hard company to love right now.

That doesn't mean that Cliffs is sitting still -- it's been working hard to do what it can in a difficult commodities market, and that's included cutting costs. In the company's core iron ore business, for example, it was able to reduce costs of goods sold by nearly 15% year over year in the first quarter. Iron ore makes up about 80% of the company's revenues, so this is a noteworthy improvement. Cliffs was also able to reduce selling, general, and administrative costs by over 20%.

Management is clearly putting in some hard work. But the big news from the quarter was actually that Cliffs is planning to jettison its coal business entirely. This segment accounts for roughly 20% of revenues, so it's a pretty big decision. At the end of the day, though, coal has been an even more difficult business than iron ore, and this division just isn't providing the returns of Cliffs' core U.S. iron ore business.

In this regard, the miner is probably making the right call to get out from under its least desirable business. But there are bigger problems afoot at Cliffs.

Iron ore is the real story
Perhaps the biggest issue to contend with at Cliffs is that iron ore pricing is still weak, and selling coal assets doesn't change this. In fact, it makes iron ore that much more important since the miner will effectively become a pure play in the iron ore space.

How big a deal is this? Year over year in the first quarter iron ore prices fell nearly 15% in the company's U.S. business, which makes up almost 70% of its iron ore revenues and nearly 95% of its adjusted EBITDA in the iron ore space.

So even though Cliffs produced more iron ore, sold more iron ore, and reduced its costs, the company's biggest unit still saw revenues and profits fall. Selling coal won't do anything to change that dynamic. What it will do is free up management to focus more keenly on iron ore and raise some much needed cash.

Debt, the other concern
And that will be important, because after the weak iron ore market debt is the second big issue to watch. On the plus side, the miner has managed to trim its debt from roughly $4.2 billion at the end of 2012 to just under $2.9 billion at the end of the first quarter. That, however, has to be juxtaposed against the fact that shareholder equity is now around negative $1.8 billion. That's not a particularly desirable attribute. Not to mention the fact that Cliffs is becoming a smaller and less diversified company in this process.

Debt reduction, however, remains high on management's to-do list -- as it should. It's just not that easy to do when you operate in an out of favor industry. For example, Cliffs has been pushing out its maturities to help even out its debt load. In the quarter it issued $540 million of 2020 debt, but it had to pay 8.25% for that privilege in a world where the U.S. government is paying investors virtually no interest. Clearly, debt investors are worried about Cliffs despite the improvements it's making. That, in turn, makes righting the ship even more difficult. 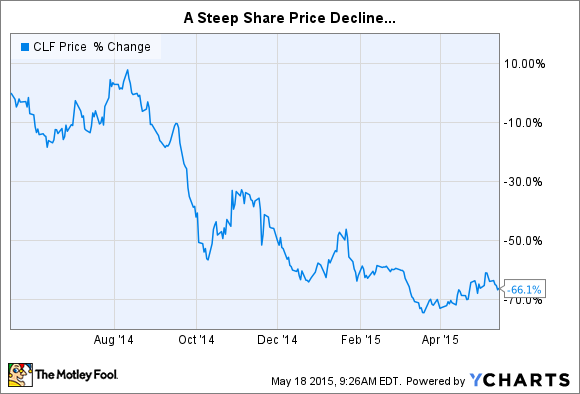 Iron ore is the key
And that all circles around to iron ore. Cliffs is trying to navigate a difficult iron market, and until prices strengthen there's likely to be little positive news for the company or its shareholders. Cutting out coal, paring debt, and riding roughshod on costs will all help it survive. But the big problem is still that Cliffs is a debt-heavy iron ore miner in a weak iron ore market. All but the most aggressive investors should probably stay away.