Here's how to use the Uniform Bank Performance Report to analyze banks and find great bank stocks.

One of the best ways to understand a bank is to look at its Uniform Bank Performance Report, or UBPR, which is updated and published quarterly by the Federal Financial Institutions Examination Council.

The data in these reports is dense and generally difficult on the eyes, but it provides an invaluable starting place for bank research. Here are some of my favorite ways to use the UBPR to find good banks, and even better bank stocks.

What am I looking at?
A bank's UBPR is most helpful for basic ratio analysis, as much of the data is presented in percentage terms. In addition, it allows an investor to broadly compare banks relative to their peer group, or banks of similar size, and in some cases of similar size and geographic distribution (metropolitan vs. non-metropolitan areas).

Let's start with the UBPR for a regional bank, PNC Bank (PNC -0.47%). PNC is a pretty simple entity, as it is mostly in the business of taking deposits and making loans.

The UBPR calculates a bank's efficiency ratio and provides some additional data on the "moving parts" that affect the institution's efficiency. Here's a snippet from PNC's report. (I added red asterisks to each snippet to point out data I'll discuss in the article.)

Notice that the bank's efficiency ratio for the first quarter of 2015 was just over 65%, which means PNC spent roughly 65% of its revenue on noninterest expenses. In the third column, titled "PCT," we see this ratio puts it in the 59th percentile of its peer group -- banks with more than $3 billion in assets.

We can surmise from other pieces of data here that PNC is a slightly higher-cost operator because of its branch and office expenses and its employee count. Notice that the company is in the 71st percentile for occupancy expense, and has $6.78 million in assets per employee relative to the peer average of $8.91 million. Having more employees per dollar in assets and higher occupancy expenses is typical of banks, such as PNC, with big branch networks.

2. Deposit quality and costs
We've determined PNC Bank is a slightly higher-cost operator when it comes to noninterest expenses. But spending more to maintain a branch network can pay dividends, particularly when it comes to attracting quality deposits.

Banking customers are often described as being "sticky." Once customers become familiar with a bank's branches, ATM locations, and online banking services, they are less likely to switch to a competing bank. Paying a little more for a big branch network can keep interest expenses low, as customers don't mind giving up a bit of interest for convenience.

Page 6 of PNC's UBPR reveals the bank funds itself primarily with deposits. Deposits make up roughly 71% of its assets, and so-called "core deposits," deposits that are unlikely to leave in search of higher interest rates, make up about 68% of its total assets.

We can dive deeper into PNC's deposit base by turning to page 12. Here, PNC lays out its funding costs for its deposits and all interest-bearing funds.

The first row shows what PNC pays on all of its interest-bearing deposits -- just 0.17% annually as of March 31. This puts it in the 28th percentile, contrasting very well to its peer group.

In the last row, the UBPR also calculates what PNC pays on all of its interest-bearing funds, which include deposits in addition to higher-cost forms of borrowing like bonds. PNC pays just 0.33% for its funding, lower than the peer average and putting it in the 46th percentile of its peer group.

One hallmark of a quality bank is its ability to fund its balance sheet with cheap money. PNC's interest-bearing deposits notably cost a mere fraction of its notes and debentures (0.17% annually vs. 3.24% annually). In banking, your assets are your inventory. The cheaper your assets, the better.

History serves as a good, although imperfect, guide for what to expect in the future. Page 7 shows a bank's historical loss experience on its loans and leases.

The first column shows that PNC Bank experienced annualized loan losses equal to 0.20% of its average total loans and leases in the first quarter of 2015, which is slightly higher than its peer group. Its gross losses, which exclude recoveries from soured loans in the past, came in at an annualized rate of 0.36% of its total loans and leases, again higher than its peer group.

Though PNC has higher loan losses relative to peers, it's important to note that its allowances for loan losses are also higher. Having higher than average loan losses can be forgiven. Investors won't forgive a bank, however, for failing to adequately reserve for losses in the future. The last column shows that PNC has significantly higher allowances built into its loan book than its peers do, which it should, since it has a higher loss experience than its peer group.

We can also get an idea in the report of why PNC has historically had more loan losses. Page 7A breaks down PNC's loans by type. 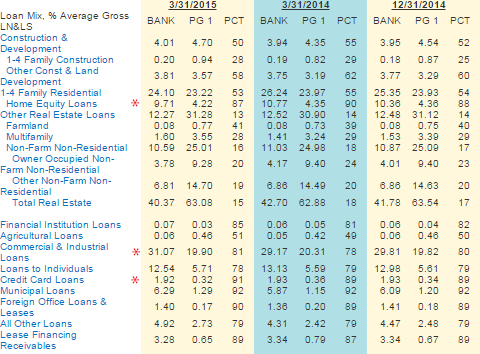 Notice that PNC carries more than twice as many home equity loans as its peers. In addition, it carries significantly more commercial and industrial loans, and more than five times the peer group in credit card balances.

These three types of loans tend to be more cyclical in that their performance will closely follow real estate prices (home equity loans) and the economy (C&I loans and credit card receivables). These types of loans also offer certain opportunities -- for example, they tend to provide more interest income than super-safe U.S. Treasury securities.

We could spend all day looking at each and every page of the UBPR, but we've touched on some of the most important pieces of the report already. The best way to become familiar with a bank's UBPR is to crack one open and get digging. But before I go...

A few parting tips on analyzing a bank's UBPR
Numbers, particularly financial ratios, are not particularly useful individually. If you looked only at PNC's efficiency or only at its cost of funds, you might come away with two vastly different opinions about the bank. Data has to be balanced -- you can't look at a single ratio in a vacuum.

Furthermore, trends are everything in the business of banking. If you look at a bank's performance in 2015, you'll see vastly different numbers than you would have in 2010, when the nation was just beginning to come out of a deep recession. Looking back further -- UBPRs go back as far as 2005 at the time of writing -- will give you a better feel for a bank's performance over time.

Finally, know that the quantitative must be combined with the qualitative. On its most recent conference call, PNC management stressed its focus on cost-cutting initiatives, and noted that much of its growth is coming from the Southeast, but you'd never know that from its UBPR. The UBPR is a great starting place to understand a bank, but it certainly isn't the end-all-be-all source for analyzing a bank or bank stock.

Jordan Wathen has no position in any stocks mentioned. The Motley Fool owns shares of PNC Financial Services. We Fools may not all hold the same opinions, but we all believe that considering a diverse range of insights makes us better investors. The Motley Fool has a disclosure policy.