Please ensure Javascript is enabled for purposes of website accessibility
Log In Help Join The Motley Fool
Free Article Join Over 1 Million Premium Members And Get More In-Depth Stock Guidance and Research
By Anna B. Wroblewska - Updated Oct 10, 2018 at 11:26AM

When you don't go to the gym, it's your budget that loses.

Our budgets often have line items that we fail to account for, like those irregular large outlays or the mindless little purchases that we make from day to day. But there's another seemingly innocuous but parasitic part of your spending that you probably don't pay much attention to: your unused gym membership.

Unless you are one of the 18% of gym members who are expected to regularly use the gym, your monthly fees are actually subsidizing the cost of someone else's workouts. We know we should cancel, but we don't. Why are we spending this money -- and how much are we losing? 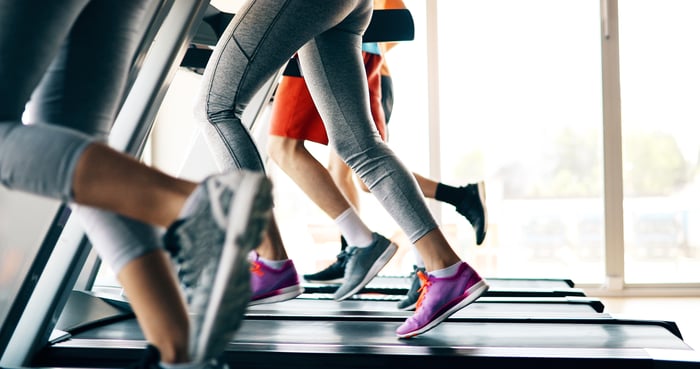 How bad is it?
Have you ever noticed how cheap the gym has gotten? You can get a membership for as little as $10 per month. How are these places making any money at those prices?

With the above statistic in mind, it actually becomes pretty logical: entice new members in with a low cost and the promise of health, and let the 82% pay for the workouts of the other 18%. Less wear and tear on machines means that the lower price can still cover costs -- even the cost of the odd pizza party or visiting masseuse.

National Public Radio reports that Planet Fitness, for example, has an average of 6,500 members per gym. Most of those gyms only accommodate about 300 people. By attracting the most profitable members of all -- the people that won't actually show up -- they've managed to build a successful business model.

And with the autodebit pulling that modest fee every month -- sometimes for years -- we absentee gym members end up losing. How much?

There isn't a lot of data on how much Americans spend on unused gym memberships. But one can deduce that if 82% of the $21.8 billion dollar health club industry is being spent by the gym-avoidant, there is almost $18 billion being lost each year. One small autodebit for man, and one very big loss for mankind.

This is an example of a wildly useful tool -- the autodebit -- becoming a problem instead of a solution. Because you usually sign a contract involving autodebiting each month, the expense can linger far past the point where you stopped returning to the gym. The power of the autodebit is its relentlessness, which in this case is a bad thing.

Where theory meets reality
This might all be obvious, of course, and yet we still sign up for gym contracts in droves. Why do we do it?

Kevin Volpp, director of the Center for Health Incentives and Behavioral Economics at the Wharton School, told NPR that, in this case, signing up for a contract makes us believe we'll be more like the person we "want" to be -- that super passionate gym member who attends classes regularly and sports a six-pack.

The problem is that, in reality, few of us actually like the "going to the gym" part of that picture. We want to, so we sign up for the contract, but we can't keep it up for the longer run. So the autodebits go off every month and we lose money for no reason. It might not be a lot at a time, but that relentless spending adds up.

Time to take your psychology back in hand -- after all, why waste your money on nothing? Cancel that contract and do something you like instead, whether it's a different form of exercise or something else entirely. More lattes perhaps, or more money to your investment account.