You heard it here first, ladies and gents: Not every new product or service will change the world.

However, every once in a long while, there's actually a company that fits the bill as a game-changer. Uber -- a ridesharing app integrated with Google Maps so you can see where the nearest available cars are and hail one electronically -- is taking the ridesharing market by storm, and is taking huge steps toward disrupting a major industry.

But just how dominant is Uber? Does its closest competitor, Lyft, stand a chance? And what sort of threat does the rise of Uber and Lyft pose? Let's dig in.

Lyft vs. Uber
Lyft was launched in mid-2012 as a service for Zimride, a company founded in 2007 that later took Lyft's name for its own. Zimride was originally a ridesharing company focused on longer carpool-like trips between cities. Uber, on the other hand, was born in 2009 as a result of the founder's less-than-impressive experiences with taxicab transportation. Both businesses revolve around the idea that you can hail a car electronically and view its progress toward your location on a smartphone app -- no need to stand in the rain to hail a taxi. Both companies also rely on everyday people to serve as drivers, using their own vehicles.

In theory, the two companies may reduce the amount of vehicles on roads in congested cities (more on this later) and often offer better prices than taxis during non-peak traffic hours. On the flip side, during high-demand hours, the price to hail a car through Uber and Lyft rises, but you aren't left waiting longer for a ride because drivers directly benefit from higher prices, which encourages more drivers to get on the roads.

So, as competing businesses, how do the two compare?

While Lyft's growth has been impressive, it still trails Uber by a landslide in every significant comparison category. In 2013, Lyft had 7,000 drivers and 488,000 rides per month. In 2014, Lyft increased those average monthly driver and ride figures to 51,000 and 2.2 million, respectively. At the beginning of 2015, Lyft was doing about 2.5 million rides per month, and it expects to do about 205 million rides in 2016, or about 17 million per month.

While Uber has been historically quiet about its ride figures, here's how it stacks up according to the few numbers it has released. 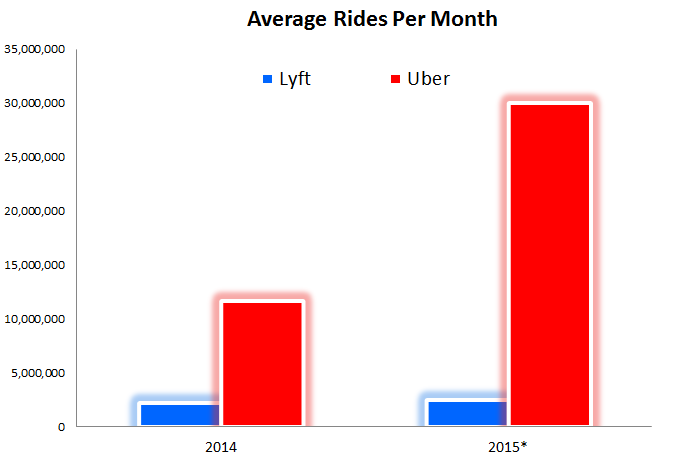 Chart by author. Data source: Uber and Lyft. Note: 2015 figures above are based on the beginning of 2015, not what the companies expect to average through the full-year 2015 -- those figures will likely be higher -- whereas 2014 figures above show the average monthly numbers.

Uber also dominates in terms of market coverage, operating in 300 cities in 60 countries, while Lyft operates in roughly 60 cities in the U.S., with no international presence.

In terms of revenue, it's important to fully understand the difference between gross and net revenues. Because the companies record all monies received from consumers, which is gross revenue, then compensate drivers, the leftover is net revenue. In 2013, Lyft generated $12 million in net revenue. Its revenue jumped significantly to $130 million in 2014, but that figure is partially inflated because its Lyft Line business -- a new carpooling service that is expected to account for about 20% of overall net revenue in 2016 --  was added into the total as gross revenue, while its main Lyft business is calculated as net revenue. Uber, however, typically only comments on net revenue.

Lyft projects it will reach nearly $800 million in revenue when 2015 is in the books, which is a 512% increase from 2014, but it will only net about $300 million revenue after compensating drivers. Here's a look at how that compares to Uber's net revenue results last year and expectations for 2015: Chart by author. Data from Uber and Lyft leaked to TechCrunch and Bloomberg.

All in all, with the amount of investor cash Lyft has collected recently, estimates have the company at a valuation of roughly $2.5 billion, which is a far cry from Uber's $50 billion estimated valuation.

It's clear that Uber has the upper hand on rival Lyft, but there might be a way for the latter to gain some ground.

The battlegrounds
There are many areas of business that Lyft and Uber will be competing intensely over, but the following two will have an interesting impact: high-demand pricing and carpooling. Let's dig into the differences, and for more details, here's a great article comparing Lyft's Heat Map pricing and Uber's Surge pricing, by Scott Van Maldegiam, a driver for Lyft. 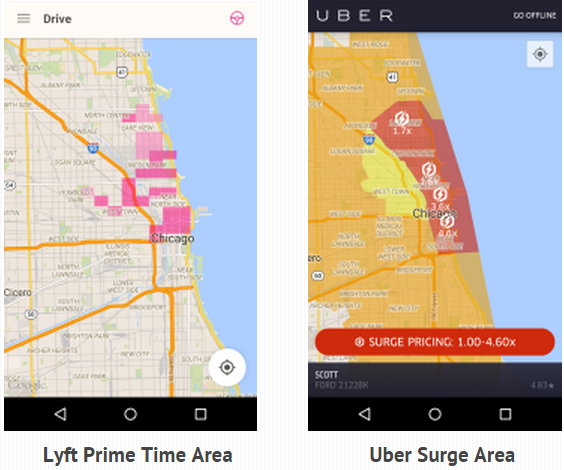 The reason that pricing during high-demand periods matters is two-fold. First, looking at Lyft, its heat map for premium pricing is spotty. Obviously, that makes it easier for consumers to dodge higher prices, which lowers Lyft's potential revenue, and also gives less incentive to drivers to work for Lyft during peak hours -- which could lead to a less timely and valuable service. On the flip side, Uber's wider surge-pricing area makes it more difficult for consumers to dodge peak pricing, and could lead them to use Lyft instead (though it means drivers have more incentive to work for Uber during high-demand hours).

The trick will be which company can find the equilibrium among higher prices, the range of heat map/surge areas, and convincing drivers to get on the streets for their respective company. With both consumers and drivers in the balance, high-demand pricing will be a focus of continuous upgrades to each company's app.

The next battleground looks to be carpooling services. Lyft offers Lyft Line, which is expected to grow to account for one-fifth of Lyft's net revenues next year; Uber offers UberPool. Both companies are testing these services, and it could be the next game-changer for whichever company creates the more valuable service.

UberPool and Lyft Line are so important because they solve legitimate problems with transportation. While the companies' regular ride-hailing services might or might not reduce traffic congestion if only one passenger uses the service, these carpooling services certainly will as more people ride together and fewer vehicles are needed to accomplish the same travel route. Also, customers will be encouraged to use the services because the prices for ride fare will be lower as more people share the ride. Yet Lyft's and Uber's gross revenue would remain unchanged.

Now, the trick is creating algorithms to search for another passenger whose journey aligns on the same route, and connecting the dots when such a match exists. This carpooling service is one reason some investors are excited about Lyft's potential to gain ground on Uber. Remember, Lyft was founded as an intercity carpooling service, and this might give the company an edge to creating a more successful carpooling business within a given city.

Lyft has convinced at least one major backer recently: Carl Icahn, who invested $100 million in the company in mid-May.

"There's room for two in this area," Icahn said in a phone interview with The New York Times. "What I'm saying is there is a secular change going on with the way people are getting around, and with urbanization, it means more people living in urban areas."

Sure, there may be room for two innovative ridesharing companies to thrive going forward, but what hurdles exist, and what industry is most threatened by the rise of Lyft and Uber? A recent study by Certify using Uber information provides a strong hint toward that answer.

Uber and Lyft vs. taxis
Certify, the second-largest expense management software company in North America, offers a great glimpse into the business traveler's use of transportation -- and it's pretty bullish for Uber and its ridesharing brethren. 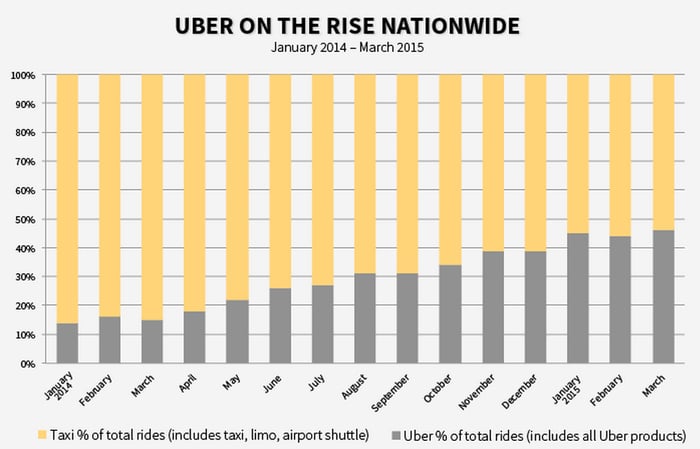 When you break it down further, the taxicab business is taking most of the hit from Uber's market-share grab. 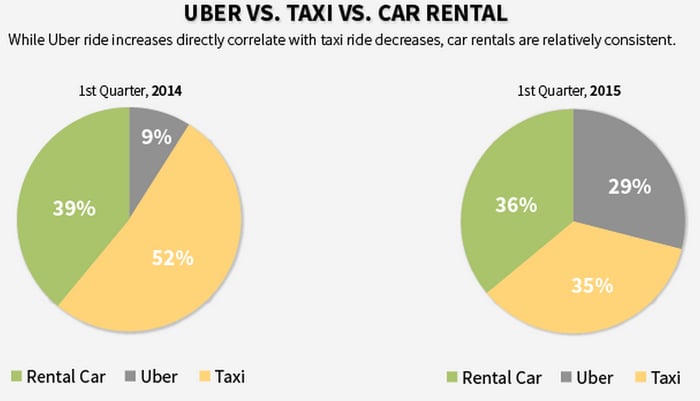 It's pretty clear that ridesharing companies like Lyft and Uber are quickly gaining market share on the seemingly outdated taxi business model -- but why?

Uber and Lyft have essentially solved all of the problems that exist with taxicab transportation. Whereas some taxis don't accept credit cards, both accept mobile payments through smartphone apps. Whereas taxicabs were often known for being dirty or having poor customer service, Uber began as an upscale option with a more luxurious car and Lyft prides itself on a more people-friendly experience. Whereas taxicabs were often scarce or late for a scheduled pickup during high-demand hours, Uber and Lyft developed surge pricing to encourage more drivers to take to the roads during times of higher consumer ride demand, and gave consumers the ability to track the drivers via their smartphone, and even check their reviews/ratings.

However, despite all of Lyft's and Uber's success, hurdles still exist as incumbent transportation industries push back.

Ridesharing vs. regulations
Perhaps the biggest battle the two companies face isn't with each other, but with state regulations. The largest complaints coming from taxicab fleets or business owners is that Lyft and Uber don't pay the same costs for background checks, city licenses and medallions, fingerprints, and full-day insurance that they do. (Uber, for instance, carries a $1.5 million insurance policy on passengers when they're being transported in the vehicle, but has a much lower rate when the vehicle is not carrying passengers.) As innovation challenges established ways, regulations could slow ridesharing companies down -- but likely not for long.

It's clear Uber has a leg up on Lyft and other ridesharing competitors, though Lyft has a chance to catch up if it can develop Lyft Line more quickly and thoroughly than UberPool. It's also clear that both companies are game-changers -- and the two might even be game-enders for the incumbent taxicab industry. Stay tuned, the ride is just beginning.