Please ensure Javascript is enabled for purposes of website accessibility
Log In Help Join The Motley Fool
Free Article
Join Nearly 1 Million Premium Members And Get More In-Depth Stock Guidance and Research
By Tyler Crowe – May 31, 2015 at 11:00AM

One can find lots of interesting investing opportunities in the oil sector by looking past the doldrums of today's market.

Are oil stocks on your investing horizon? (Photo credit: Glenn Beltz via flickr.com).

The commodity cycle is a major distraction for investors in the oil market. New energy technologies such as solar and wind will command a larger and larger share of the energy pie, but our thirst for energy continues to grow -- and oil will remain a pivotal component of the overall mix for many years to come.

With this in mind, let's look at some of the longer term opportunities that will shape the way oil will be produced in the future, and how investors will be able to make a decent profit in the process.

OPEC will stay relevant as long as there is oil in the ground
As a single entity, OPEC oversees the between 70% and 80% of the world's proven oil reserves, and more than 40% of total production. At its current rate, production could be sustained for approximately 90 years. As long as the member countries all have oil in the ground, they have a common interest in sticking together to maintain certain production levels.

This is important to investors in the oil space because nearly all of the countries within OPEC have national oil companies that operate all of the wells within their respective borders. With some exceptions, such as production sharing contracts, the oil and gas producers that we know and can invest in have very limited access to these reserves.

That doesn't mean that we are completely cut off from these barrels of oil -- it just means that you need to look beyond producers. The remaining reserves in these countries are more difficult to access, leading to a larger role for oil and gas equipment and services companies.

Two companies in particular, Schlumberger (SLB 1.72%) and Core Laboratories (CLB 3.38%), are poised to do well here. Schlumberger already generates more than a third of its pre-tax income from its Middle East and Asia division, and is by far its most profitable geographic segment, with operating income margins of 28%. Core, on the other hand, is developing a strong presence in some of the mature oil fields of the Middle East in places such as Kuwait and the UAE as it develops reservoir management and enhanced oil recovery strategies for these aging fields.

Offshore's emerging presence
OPEC may still be the dominant producer in the world, but that other 60% of global production needs to come from somewhere -- and offshore rigs are a potential source of that production. It is estimated that we will need to produce another 23 million barrels per day to replace declines at existing wells and to satisfy new demand, and close to 60% of that new production will come from offshore sources, as seen in this chart. 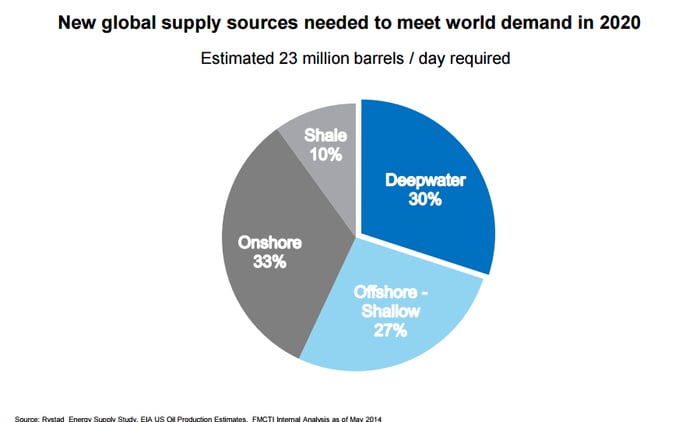 What this likely means is that companies that are oriented toward offshore drilling -- rig companies, specialty equipment manufacturers, service companies -- will play a bigger role in the future. That may be hard to see today with oil prices at such low levels and an oversupply of offshore rigs, but those planning for the long term could look at the current hiccup in the commodity cycle as an opportunity to buy stocks on the cheap.

We will revisit oil wells once thought long abandoned
An oil reservoir goes through several stages in its life. Early on, there is enough pressure built up to force oil out of the ground. Once that pressure is relieved, we keep the oil flowing by using lift pumps and flooding the reservoir with water. When these techniques are no longer productive, though, there is still lots of oil left -- in fact, about 60% of the original amount.

What is really starting to take hold today is a technique known as CO2 injection, which can boost recovery from these older reservoirs once again, as seen in this chart. 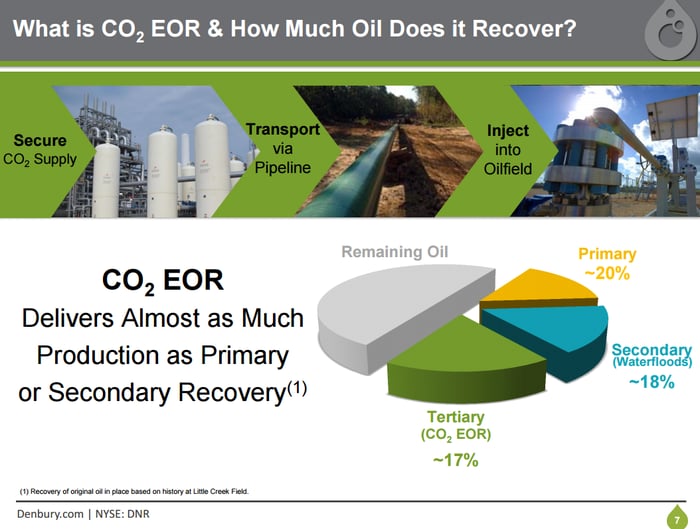 This process does require a higher oil price to make sense, and involves some pretty big up front capital to secure a CO2 source and transport it to a suitable well, but techniques like this could go a long way towards maintaining production without the cost of moving to new territory without appropriate infrastructure. Some of the most prominent adopters of these techniques are the integrated oil and gas companies that have the deep pockets required for these more capital intense projects, but some smaller players like Denbury Resources (DNR) are showing that even smaller independent producers can do it effectively. Denbury estimates that the amount of oil that can be recovered in the U.S. using these CO2 techniques is somewhere between 33 billion and 83 billion barrels of oil, more than double the current proved reserves in the U.S. today.

What a Fool believes
Looking around the energy space today for a great investment may feel like an exercise in futility based on current oil prices, but beyond the choppy waves of oil prices and short term supply and demand fluctuations there is a bright horizon ahead. If you are willing to plan for the long term there are ample investing opportunities in oil just waiting to be had.

Tyler Crowe owns shares of Core Laboratories. You can follow him at Fool.com or on Twitter: @TylerCroweFool.