Costco (COST -0.15%) is one of the biggest retailers in the world, with $110 billion of annual sales. Yet the warehouse giant isn't a dominant player in the industry's biggest global trend: the shift to e-commerce.

Costco gets just 3% of sales from online purchases. That's less than half the digital pace for the nation as a whole. Online revenue accounted for 7% of all retail sales last quarter, according to official statistics. 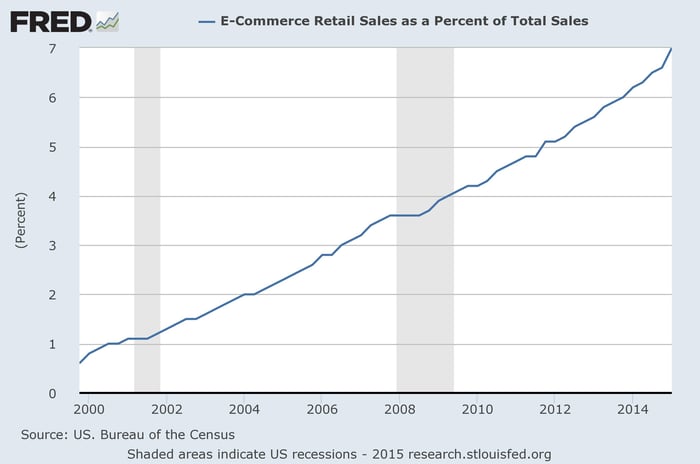 Will Costco ever catch up and start doing massive business through its website, or will the bulk shopping warehouse model keep it on the sidelines of this huge shift?

A relatively small enterprise
In comparison to its global warehouse footprint, Costco's digital sales operation is small. The company operates e-commerce stores in just four countries: the U.S., Canada, the U. K., and Mexico. It has physical locations in all those markets, but also in Japan, Korea, Taiwan, Australia, and Spain.

However, online sales are growing faster than the rest of Costco's business -- up 21% last quarter compared to a 6% spike in physical comps. Thanks to lower overhead, website sales are also more profitable than Costco's warehouses, which typically run at close to breakeven on net operating margin.

That's a key reason why Costco is expanding its online presence. Management plans to launch e-commerce stores in two more countries over the next year.

Staying focused on warehouses
Still, Costco isn't as aggressive as its competitors in attacking online sales. Wal-Mart, for example, just expanded its grocery delivery test to five cities. The service promises same-day pickup or home delivery for customers who make their purchase by 10 a.m.

Inside a Costco warehouse. Source: The Motley Fool.

Grocery store chain Kroger is also busy leveraging the infrastructure it gained from its Harris Teeter acquisition to expand its home delivery and in-store pickup options. Both of these retailers have thousands of store locations around the U.S., compared to just 400 Costco warehouses.

During the retailer's latest conference call, Wall Street analysts asked Costco executives how they plan to respond to such competitive moves. Chief Financial Officer Richard Galanti explained that Costco is keeping an eye on rivals while focusing on its core strength: the in-store warehouse shopping experience:

I enjoy going to Costco and I know a lot of other people do too ... ultimately it's about value. We recognize that convenience is value and we are not [as good as some on the] convenience side -- so we're not going to the be company that delivers two different cereals to your doorstep at 7 a.m., as long as you order by 10 p.m. the night before.

But we will sell to some of those people, and more importantly there are a lot of reasons to come into Costco. We don't have our head in the sand, but we know there are certain things we can't do as well.

Sticking with what works
There's no arguing that Costco's retail approach resonates with shoppers right now. The company led all national retailers in a recent survey of customer satisfaction, which helps explain why its subscriber renewal rate ticked up to a record 91%.

These membership wins have powered an incredible streak of sales growth. Comps were up by 5% or better in each of the last four fiscal years even while competing retailers struggled to break much above 2%. And Costco's customer traffic has grown at an impressive 4% clip for six years running.

Sure, its smaller store footprint doesn't translate as easily as rivals' to home delivery or in-store pickup strategies. That could keep a lid on the retailer's online growth. But the company still plans to invest in this growing sales channel while focusing on continuing to drive customers into its warehouses.