SandRidge Energy Inc's (NYSE: SD) management team made a very curious move recently when it issued over $1 billion in new debt. What made this such a strange move was the fact that the company's management team recently said it already had $1 billion more debt than it should in the current oil price environment.

The recent debt issuance, when combined with some curious comments made by CEO James Bennett on the company's first-quarter conference call, seems to hint that SandRidge Energy could be up to something, such as contemplating a very large acquisition. Here's why such a move isn't as far-fetched as it might seem at first glance.

Liquidity, leverage, and cash flow
On SandRidge's first-quarter conference call, CEO James Bennett made one thing abundantly clear: "Liquidity is paramount in our business, so that's maybe priority number one." That statement help us make sense of the company's recent debt issuance, where it raised $1.25 billion in new debt. Clearly, the company wanted as much liquidity as possible, even if the best solution available added to the company's ballooning debt problem. SandRidge's new debt nearly doubles its liquidity from the $725 million it had at the end of the quarter as noted on the slide below. 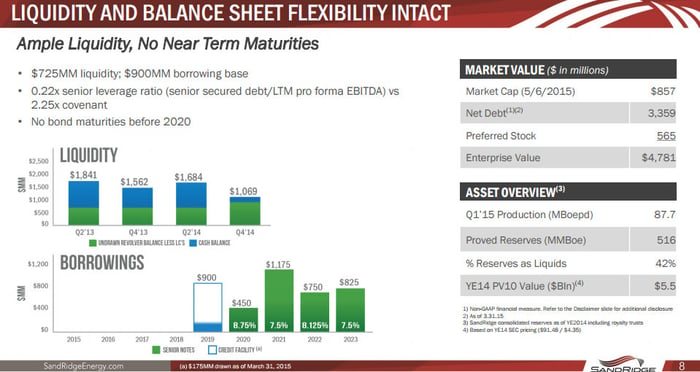 That liquidity boost aside, the company's long-term solution to its debt problem is to get its cash flow in line with its debt. According to Bennett, "if you do the math on the spreadsheet, the debt reduction probably needs to be in that billion dollar range, or a substantial increase in the cash flow." That statement was said before the recent debt issuance, so now, the company needs to either eliminate $2 billion in debt, or raise its cash flow to easily support the company's $4.6 billion in debt. Obviously, a big jump in oil and gas prices would help bridge that gap. However, another potential solution would be to increase its cash flowing assets, which could be done via an acquisition.

Dropping hints?
Bennett actually dropped some hints on the company's conference call that suggest an acquisition of oil and gas assets wasn't beyond the realm of possibility. He has said on a number of occasions that SandRidge was considering a range of alternatives, and that "nothing is off the table."

In addition, he reminded investors of SandRidge's strengths:

We are a skilled, large-scale developer of mid-continent assets [...] These skillsets are transferable to other areas and other plays. We are an expert at horizontal redevelopment of legacy vertical fields and develop a deep understanding of mid-continent opportunities and the geology. We have a large capacity to execute. At the peak, we ran 35 horizontal rigs and averaged 31 rigs in 2014, so we can efficiently run a large-scale program. Innovation and continuous improvements are part of our culture [...] We pioneered the use of multilaterals in the mid-continent and were the first to drill with horizontal Chester oil wells. We have an active, appraisal new venture program, it's testing new zones and new concepts in the mid-continent, and importantly, we have a strong team with experience from majors, independents, midstream and Wall Street.

Bennett points out three things worth noting. First, the company's skill set is transferable to other basins. Second, the company has a large capacity to execute. Third, SandRidge is a pioneer of new technologies. All of which suggest that if the right opportunity arose, SandRidge Energy could consider a major acquisition of cash flowing assets in a legacy basin that are ripe for redevelopment using its innovation and technology.

One other thing the company made clear on the call is that its current cost structure, even after a large headcount reduction, is still geared for a 20-rig program. That means the company's current capacity is enough to run nearly three times as many rigs as it's currently running. These are really wasted costs from a shareholder perspective, unless of course the company plans to be back up to 20 rigs within the next year or so. The only way it could add that many rigs would be if oil prices suddenly doubled, or if the company made a substantial acquisition of acreage that had very compelling drilling economics.

Investor takeaway
SandRidge Energy is looking for outside-the-box solutions to get its balance sheet in line with its cash flow. One option not off the table is to acquire its way into balance by making a meaningful acquisition of oil and gas properties that not only produce strong cash flow today, but also come with untapped upside. It's a long shot, but if the company could pull it off, it would be a real coup.