The battle on privacy policies between Apple and Google continues to heat up.

The iOS and Android operating systems are no longer the source of Apple (AAPL 1.92%) and Google's (GOOG 4.42%) (GOOGL 4.61%) greatest battle. The new skirmish represents, perhaps, the companies' most heated dispute yet. The topic of disagreement? None other than the most sensitive topic in tech: privacy.

Cook gets passionate about privacy
On Monday, Apple CEO Tim Cook was honored for excellent leadership during EPIC's Champions of Freedom event in Washington.

A public interest research center in Washington, D.C., EPIC was established in 1994 to turn public attention toward "emerging civil liberties issues and to protect privacy, the First Amendment, and constitutional values," EPIC's website reads. "EPIC maintains two of the most popular privacy websites in the world -- www.epic.org and www.privacy.org."

Speaking remotely during the event, Cook proceeded to talk on customer privacy and encryption. While never mentioning Google directly, he left a trail of words clearly aimed at the search giant. Google's entire business model is built on the premise of sifting through user data to serve advertisers more targeted advertising solutions

"Like many of you, we at Apple reject the idea that our customers should have to make trade-offs between privacy and security," Cook said, beginning broadly. "We can, and we must provide both in equal measure. We believe that people have a fundamental right to privacy. The American people demands it, the constitution demands it, morality demands it."

But later in the speech, Cook narrowed in on subjects closer to home for Google. Cook's most stinging words came when he seemed to indirectly reference Google's new Google Photos service. The new photo service is free, storing unlimited photos and videos in the cloud (up to a certain quality). But Google scans the photos and assigns them metadata, helping Google build a more accurate picture of the user to serve more relevant ads.

We believe the customer should be in control of their own information. You might like these so-called free services, but we don't think they're worth having your email, your search history and now even your family photos data mined and sold off for God knows what advertising purpose. And we think some day, customers will see this for what it is.

To be fair, Google's expertise in metadata also makes for an awesome user experience within Google Photos, enabling users to search their photos using keywords like "cat," "kissing," "MacBook," etc.

Two different business models
Unlike Google, Apple doesn't need to mine personal data and use it to serve more relevant ads. Even Apple's iAd advertising solution for developers doesn't get data from Health and HomeKit, Maps, Siri, iMessage, call history, or any iCloud service. 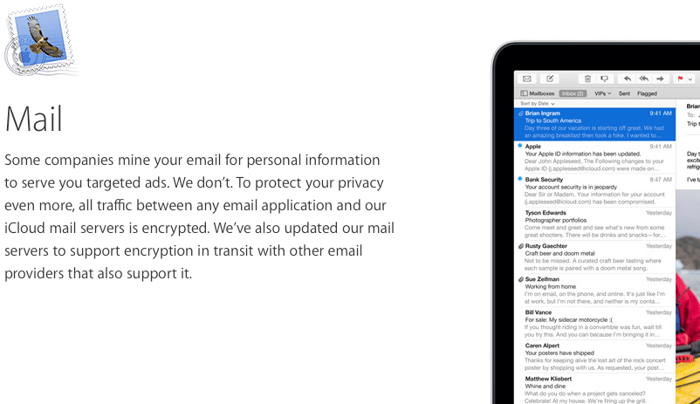 Apple's approach to promoting its refusal to mine data to serve more relevant ads appears to be directly opposed to Google's business model. Image source: Apple

It's on this practice where the two companies' business models go in completely different directions. Apple earns the majority of its profits from up-front profit margins on its products. Google, on the other hand, offers many of its services for free and makes money by scanning user data to serve more relevant advertising.

"A frustration I have is that a lot of people increasingly seem to equate an advertising business model with somehow being out of alignment with your customers," Zuckerberg said. "I think it's the most ridiculous concept. What, you think because you're paying Apple you're somehow in alignment with them?"

Zuckerberg went on to imply that better customer alignment can be achieved with advertising subsidizing the costs of a product or service: "If you were in alignment with them, then they'd make their products a lot cheaper."

Over time, which model will prevail? Free services supported by highly targeted advertising (based on user data) or fee-based products and services with greater privacy? Chances are, both will continue to coexist and there will be plenty of middle ground. But don't expect this argument to fade away anytime soon.