Net-net investing, used by Warren Buffett in the 1950s, is a classic value investing technique introduced by Benjamin Graham. Here's how to identify net-nets, as well as the risks associated with them.

Benjamin Graham -- the father of value investing, author of timeless investing classics The Intelligent Investor and Security Analysis, and mentor to Warren Buffett -- advocated buying stocks well below their intrinsic values. One method Graham preached was "net-net investing": essentially buying stocks at such a low price that an investor would come out ahead if the underlying company was shut down and liquidated.

Net-net investing was a successful strategy for many years. In Warren Buffett's most recent letter to shareholders, the Oracle of Omaha pointed to net-nets as the source of most of his early gains in the 1950s. Net-nets were far more prevalent decades ago, compared to recent years, making net-net investing much more difficult to pull off successfully today.

However, Graham's techniques remain useful for investors to understand.

What is a net-net?
A net-net is a company with a market capitalization that is less than the company's current assets minus total liabilities, or equivalently, the company's working capital minus long-term liabilities. This value is called the net current asset value. Long-term assets -- like land, equipment, buildings, and intangible assets -- are treated as being worthless.

If a net-net were to be liquidated, with current assets being used to settle all outstanding liabilities, the leftover cash would be worth more than the market capitalization of the company. Buying shares of a net-net, then, is essentially like buying a dollar for $0.50. You're also getting the company's long-term assets, which are likely worth something, for free.

One thing to note: In the event of liquidation, certain current assets would likely fetch less than their carrying value on the company's balance sheet. For example, inventory would likely need to be sold at fire-sale prices, reducing the total liquidation value of the company. When calculating a company's net current asset value, the value of inventory should generally be reduced to reflect its true liquidation value.

If, after adjusting the value of the current assets, a company still trades below its net current asset value, then the company is almost certainly undervalued.

The problem with net-net investing
It's unlikely that a company will choose to liquidate itself outside of bankruptcy, so often, net-nets will continue operating. As Buffett talked about in his recent letter to shareholders, these types of stocks can be attractive as short-term investments, with the hope that the market quickly realizes its mistake and prices the stock above its net current asset value, but they generally make for poor long-term investments.

Companies that become net-nets are typically mediocre at best and poor at worst. They have no competitive advantages, profitability can be erratic or non-existent, and predicting future profits is an exercise in futility. If the company is unprofitable, its net current asset value can decline over time; what once seemed like a sure thing can quickly become a nightmare for investors.

From net-net to bankrupt
Consumer electronics retailer RadioShack declared bankruptcy earlier this year, but back in 2012, the stock looked like a steal. On Nov. 1, 2012, shares of RadioShack closed at $2.03, putting the company's market capitalization at about $203 million. Its most recent earnings report at the time, for the quarter ending on Sept. 30, 2012, put RadioShack's net current asset value at $345.5 million. RadioShack was trading at a 41% discount to its net current asset value, making it a bona fide net-net.

By the end of 2012, RadioShack had already started to lose money. The company ended up posting a $139 million net loss in 2012, down from net income of $72 million in 2011. Without much of a plan from management, and with big-box stores and e-commerce eating away at RadioShack's business, the stock was a dubious long-term investment. 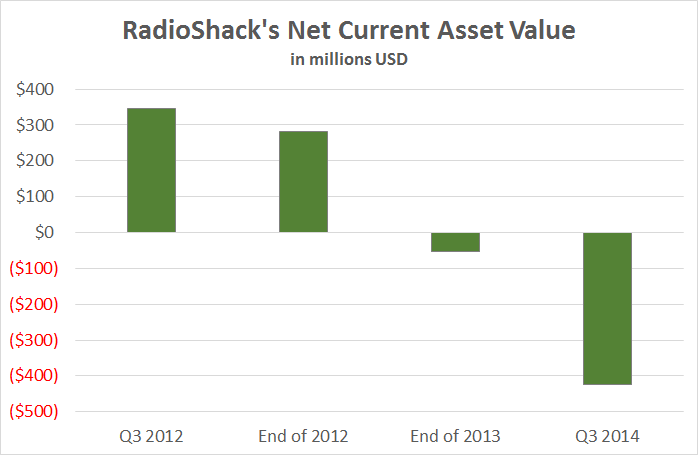 This chart sums up the main risk with net-net investing. Had RadioShack liquidated itself at the end 2012, investors who bought on Nov. 1 of that year would have very likely come out ahead. But RadioShack kept operating until it couldn't afford to pay its bills, wiping out any value in the process.

Is net-net investing still relevant?
Net-nets don't always turn out badly, and net-net investing can still be a viable strategy if the risk is spread across many stocks. But with net-nets far rarer than they were during Graham's time, finding one that's not losing money is difficult.

If you find a company trading at a discount to its net current asset value, and it's consistently profitable, and there's no reason to believe its profit will dry up anytime soon, that stock is very close to a sure thing. But if the company is losing money like RadioShack, without a viable plan to turn things around, buying shares as a long-term investment is unlikely to turn out well, regardless of its status as a net-net.

Timothy Green has no position in any stocks mentioned. The Motley Fool recommends Apple. The Motley Fool owns shares of Apple. We Fools may not all hold the same opinions, but we all believe that considering a diverse range of insights makes us better investors. The Motley Fool has a disclosure policy.