National Retail Properties has a unique acquisition strategy and a long track record of excellent performance, making it a retail REIT to watch

As of its most recent quarter, the company owns just over 2,100 properties in 47 states, representing 23.1 million leasable square feet. Most properties are in "Main Street" locations -- so there is a strong market for replacement tenants in the event a tenant decides not to renew its lease.

The company's main strategy is to grow through acquisitions -- National Retail Properties is not in the development business at all, unlike many of its peers. The company will also sell assets from time to time in order to manage risks and fund future acquisitions that it feels would be better uses of capital.

More stability than its peers
National Retail Properties has been able to produce steady growth and a more stable revenue stream than its peers for a couple of reasons.

First, the properties are leased to a diverse group of tenants, and most represent strong, national brands. In fact, the top 25 tenants make up 60% of National Retail Properties' rental income, and each of these companies averages 1,612 separate retail locations (not all owned by National Retail). Among these top tenants are such household names as 7-Eleven, SunTrust Banks, and Best Buy. In all, National Retail Properties rents to about 400 tenants in 38 separate industries.

And National Retail Properties' tenants are all on "net leases", which require the tenants to pay the variable expenses associated with owning a property, such as property taxes, building insurance, and maintenance. With other types of real estate, such as residential, these expenses are the responsibility of the landlord. Furthermore, the company's tenants sign long-term leases of 15-20 years, and the average active lease has 11.5 years remaining. This creates a foundation of predictable income for years to come.

When leases run out, the location-centric nature of the retail business and the strength of the tenants keep the renewal rate high. From 2007 to 2014, 87% of tenants whose leases expired chose to renew, and 71% of these were renewed at or above the previous rental rate.

While occupancy rates in the retail sector tend to be lower than those of residential rental properties, National Retail Properties' strategy of great locations and strong tenants has produced a fantastic 98.8% occupancy rate. Even during the toughest times, it hasn't fallen below 96.4%. 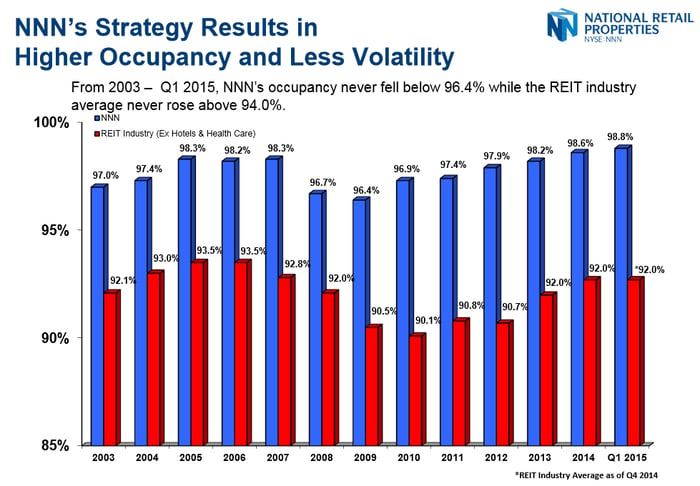 Strong record of success
Over the past 25 years, National Retail Properties has produced an average annual total return (dividends plus price appreciation) of 15.9%, which is tremendous performance to sustain over such a long period. To put this in perspective, a $10,000 investment in the company 25 years ago would be worth more than $400,000 today.

And National Retail Properties is a "dividend aristocrat", which means it has increased its dividend for 25 consecutive years, making it a great choice for investors who rely on their portfolios for income -- or plan on doing so in the future. The stock currently yields 4.4%, and there is no reason to believe this won't continue for years to come. 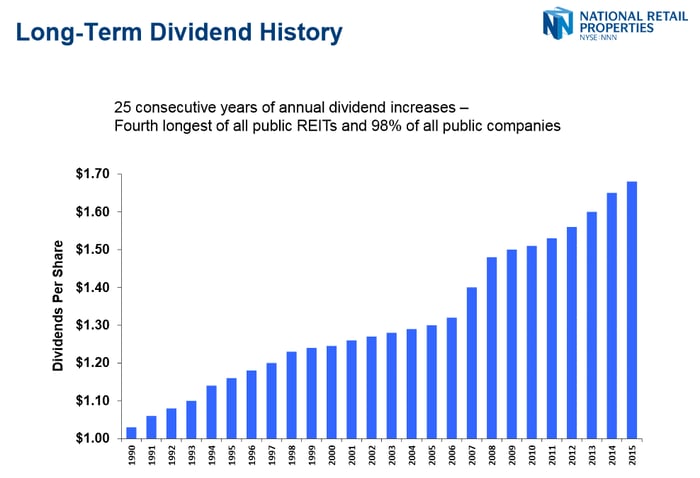 Of course, the company's past success doesn't guarantee its future performance, but I see no reason to think it won't continue. Due to the stable, increasing nature of the company's income stream and its low-leverage approach, National Retail Properties should keep producing solid income and growth for the foreseeable future.

Competitive advantages
Now for the million-dollar question: why would investors choose National Retail Properties over one of its sector-leading peers, like Realty Income (O -0.22%)?

Plus, National Retail Properties uses sector-low leverage in its portfolio. The company only has $1.76 billion in debt, which makes up just 32% of its total assets. Additionally, none of the debt is at a floating rate, which is a big advantage once interest rates begin to rise.

Speaking of interest rates, the company's unique acquisition strategy produces very high initial cap rates on properties (a property's initial yield relative to its cost) of 7% or more. This means that when interest rates rise, National Retail Properties can absorb spread compression -- the difference between its cap rate and its cost of funding -- better than most of its peers.

Finally, because of its investment-grade debt rating, the company has access to low-cost capital. In fact, CFO Kevin Habicht estimated in the company's most recent conference call that 10-year debt could be issued in the "mid to high" 3% range right now.

A good time to buy?
National Retail Properties is expecting adjusted funds from operations (FFO) of $2.20-$2.23 this year; shares are currently trading for 17.1 times the midpoint of this range. This is the lowest it's traded so far in 2015, but is in line with the company's own valuation from the past few years. So, while I would say that National Retail Properties is trading at a fair price, it is by no means cheap. 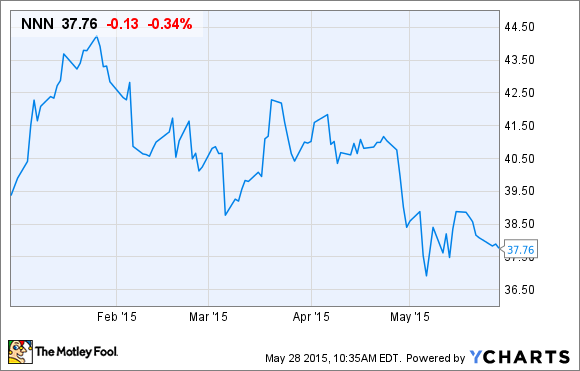 Now, the stock isn't without risk -- no investment with double-digit returns is -- but the risk of something catastrophic happening to the company's revenue stream is pretty low. Most of the larger tenants are at little risk of going out of business anytime soon, and there is little interest rate or refinancing risk.

All things considered, National Retail Properties definitely belongs on the radar of any REIT investor looking for a long-term home run.

Matthew Frankel owns shares of National Retail Properties, and Realty Income.. The Motley Fool has no position in any of the stocks mentioned. We Fools may not all hold the same opinions, but we all believe that considering a diverse range of insights makes us better investors. The Motley Fool has a disclosure policy.

These 3 Dividend Stocks Fly Below the Radar: Should They Be on Yours?

These 3 Stocks Are at All-Time Highs -- Are They Worth Buying?