It's usually a good idea for long-term investors to take a step back once in a while and look at the thematic trends affecting the prospects of their stocks. One such trend for transportation companies United Parcel Service Inc (NYSE:UPS) and FedEx Corporation (NYSE:FDX) is the relative weakness in global trade growth when compared to global GDP growth. Both companies' managements have mentioned the issue on earnings calls. So I decided it would be a good idea to delve deeper into the trend by looking at Switzerland's Kuehne + Nagel (OTC:KHNGF).

Now, I know what you are thinking: why dissect a European logistics company when looking at trends in UPS and FedEx? The answer is simple -- Kuehne + Nagel claims to be the number one global seafreight forwarder, the number two global air cargo forwarder (where it competes with UPS), and the number two global contract logistics provider (competing with UPS and FedEx). As such, the Switzerland-listed company provides an ideal barometer for global trade patterns, and a way to look at the issue in isolation.

International freight forwarders act as agents to exporters who want to shift cargo overseas, and with Kuehne + Nagel playing the leading role in the marketplace, the company is a good place to start looking at industry trends.

Changing end markets
In a previous article on UPS and FedEx I outlined the three key trends developing since the last recession. They are:

Clearly, the last trend is of greatest relevance here, and the following chart from the International Air Transport Association demonstrates its development. The chart illustrates how global trade growth relative to domestic industrial production growth has slowed since the recession. When the former is growing more than the latter, the ratio should be increasing. As you can see, the ratio has flat-lined in recent years, putting pressure on companies that rely on global trade. 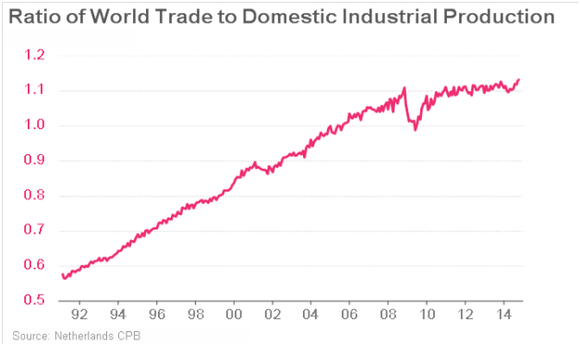 Kuehne + Nagel struggling to grow revenues
Looking at the revenue and earnings numbers from Kuehne + Nagel will help to isolate the effect. As you can see in the chart below, the company has struggled to grow revenues since the recession. You can look at the strong growth recorded in 2010 as a bounce-back from the recession weakness in 2009, but after that the growth rate slows notably -- particularly compared to pre-recession levels. To put this in perspective, the CHF 17.5 billion in revenue recorded in 2014 is 2.7% less than the pre-recession peak in 2008. 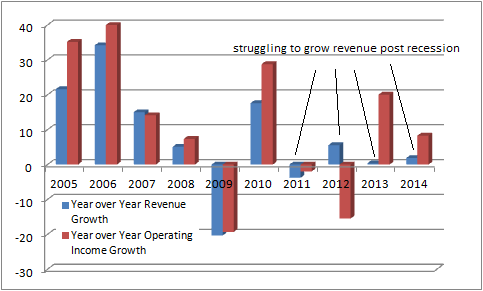 In other words, the figures in the second chart are an indication of how tough it's been to grow revenue for companies reliant on global trade growth. In fact, a combination of moderate end-demand and strong competition (including U.S. companies like UPS and Expeditors International of Washington) in seafreight and airfreight in 2014 meant that constant currency revenue grew less than volumes in both activities--implying significant pricing pressure.

Kuehne + Nagel targets
Clearly, Kuehne + Nagel is having to battle sluggish growth in world trade and a strong Swiss Franc (which reduces the local currency value of its foreign earnings); moreover, its core European market might struggle as the weak Euro could encourage a slowdown in import growth.

Its long-term aim will be to grow more than the market while focusing on its mid-term aims of growing EBIT margins and reducing working capital intensity.

What it means for UPS and FedEx
Turning to UPS and FedEx, the impact of moderate growth in world trade is likely to mean that both companies will focus on serving domestic demand, or possibly investing in intra-regional operations such as FedEx's bid for Netherlands-based TNT Express.

Indeed, in a previous article on FedEx, readers saw how, since the recession, the company's Ground-based operations have increased in importance in relation to its Express and Freight solutions. 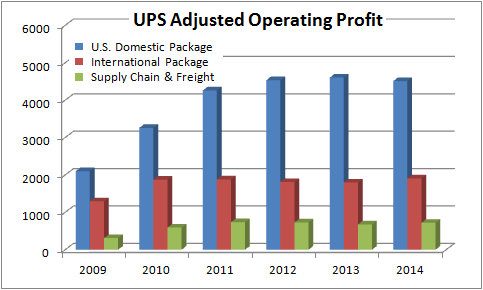 All told, the evidence from Kuehne + Nagel is that transportation companies are being adversely affected by the moderate growth in world trade, and UPS and FedEx investors can expect their companies to focus on domestic and intra-regional growth. In other words, provided the trend continues, you need to be bullish on U.S. growth prospects in order to hold UPS and FedEx with comfort.