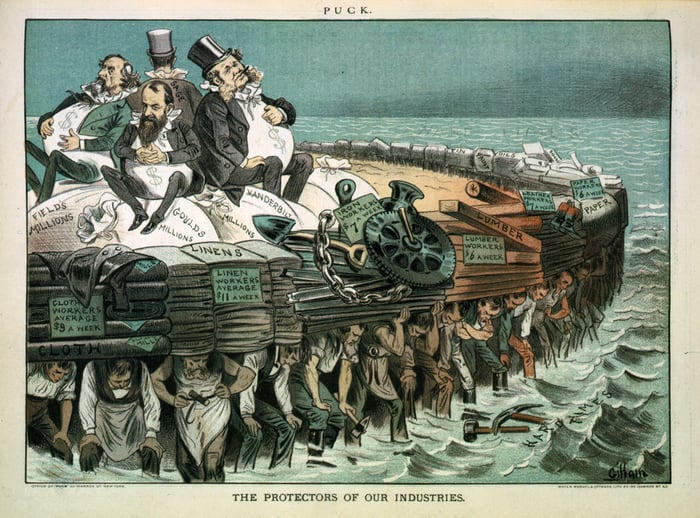 While the term has largely gone out of style, robber baron was an expression used to negatively describe powerful American businessmen of the 19th century. It was applied to those who were viewed as using unethical or exploitative business practices to amass great wealth.

What is the definition of a robber baron?
The term robber baron actually dates back to the 12th century, when it referred to feudal lords who amassed personal fortunes using illegal business practices such as charging tolls or otherwise robbing those passing through their lands. It is a term that combines the criminality of robbery with the low-level (and often seen as illegitimate) aristocratic title of baron.

Instead of physically robbing individuals, the 19th century robber barons were said to have stolen control over natural resources, paid unfairly low wages, and pushed out their competition using questionable business practices. That said, while their practices weren't viewed as ethical, most of the 19th century robber barons didn't commit any illegal acts, though through their actions new laws were enacted to prevent others from following their path to riches.

Carnegie, for example, led the expansion of the steel industry in the late 19th century through the creation of Carnegie Steel Co., which he subsequently sold to Morgan in 1901 for $480 million (or roughly $13.5 billion after adjusting for inflation). Among the tactics he used to amass his wealth were paying low wages and trying to break unions. One result of this strategy was the 1892 Homestead Strike, in which several people were killed as a result of hostilities between union workers and the company. Furthermore, his company was intently focused on efficiently producing steel at the expense of worker safety, resulting in many devastating injuries.

Rockefeller, likewise, amassed great wealth through less than ethical means as he consolidated the petroleum industry by acquiring rivals. He then undercut competitors until they agreed to be taken over. As a result, his company, Standard Oil, controlled 90% of the U.S refining market in the U.S. at its peak. That enabled him to then charge more for his products and reap the windfall.

The 19th century robber barons exploited holes in the capitalist system for their own gain. Their practices led to enactment of a number of laws to prevent these actions from being repeated. For example, the U.S. Supreme Court in 1911 ordered that Standard Oil be broken up after finding the company in violation of the 1890 Sherman Antitrust Act. Meanwhile, the Glass-Steagall Act led to the breakup of J.P. Morgan's banking empire into three separate entities. These new laws, or their enforcement, have made it much tougher for businesses to gain unfair advantages over competitors. The federal recognition of unions in the 1930 also led to improved working conditions and more workers' rights.

Takeaway
Capitalism has never been a perfect system, and some have exploited its weaknesses for their own personal gain. The robber barons of the 19th century used what were viewed as unfair labor practices and anti-competitive business activities to amass great fortunes. Their actions resulted in new laws intended to prevent others from following in their footsteps in exploiting the same weaknesses of the capitalist system.