CarMax buys and sells used cars, and it does so really profitably. Here's a breakdown of CarMax's business and why the stock has been thriving.

As much as we all love driving away in a new or used car the purchasing process can be frustrating and about as fun as watching paint dry. The odds seem stacked against you when you step foot in an automotive dealership; there's a lot of pricing and financial information consumers don't have, an immense amount of paperwork to wade through, and often times consumers are ignorant to car salesmen tips and tricks.

Fortunately, because consumers have become fed up with new and used dealership tactics, new companies have formed to help solve these problems. One of those companies is CarMax (KMX 0.08%).

Let's dig into how CarMax is solving age-old consumer problems at the used car dealership, how it's created a lucrative business for investors in the process, and if the stock can drive higher.

Problems solved
CarMax offers consumers a used vehicle purchase process that is fundamentally different and improved from a typical auto retail experience. There is a no-haggle pricing mandate which removes a standard frustration with consumers. Also, CarMax sales consultants are generally paid commissions on a fixed dollars-per-unit standard which means the salesmen have no incentive to influence your decision toward a higher priced vehicle, a more profitable vehicle, or to try to sneak higher interest rates by you.

CarMax stores offer consumers the opportunity to shop for a used vehicle and let their guard down, and that's valuable.

Furthermore, CarMax also reassures its potential consumers with its Quality Certified standards where each vehicle must pass a comprehensive inspection before being offered for sale and each vehicle sold has a 5-day money back guarantee and at least a 30-day limited warranty. There are also numerous protection plans available – more on that later.

The used car retailer also offers consumers another advantage: as CarMax continues to expand with new stores opening annually, it increases its network effect. At the end of February CarMax had a nationwide inventory of more than 60,000 vehicles available on its website and mobile apps. Those vehicles can be transferred at the request of a car buyer giving consumers access to a much larger selection of vehicles than a traditional used car retailer. In fact, in CarMax's fiscal year 2015, 31% of its vehicles sold were transferred at customer request.

Because of CarMax's no-haggle pricing, thorough vehicle quality inspections and a wide selection of vehicles available to be transferred upon consumer request, its business and stock have been thriving. Let's break down CarMax's business products, services, and financial results, to determine if the company is one of the best automotive industry stocks around.

Break it down!
Before we get to the details of CarMax's business segments, here's a breakdown of the profits per segment. 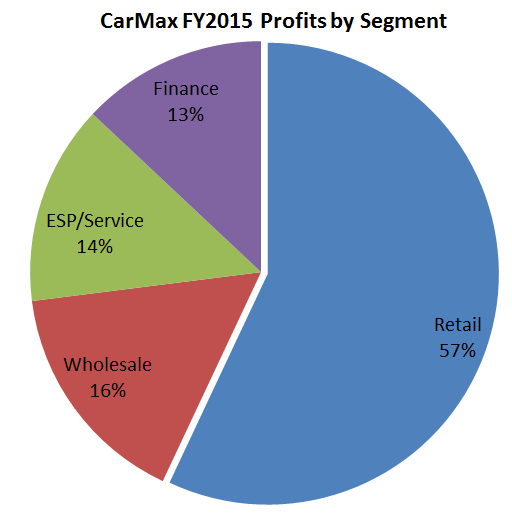 CarMax is already the largest retailer of used cars in the U.S. and its business focuses on selling used vehicles between 0 to 10 years old and generally in the price range from $12,000 to $34,000. Looking at sales over the past decade, in the graph below, it's clear that CarMax's business model is catching on with consumers. 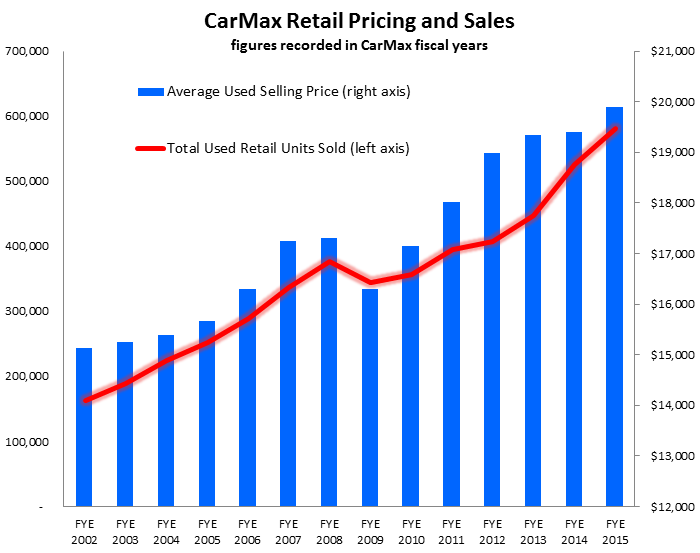 CarMax has historically generated between 11% and 12% gross profit margins on its used retail sales, not including profits from its finance arm, but as average sales prices have increased much of that increased price tag has filtered to CarMax's bottom line: in FY2003 CarMax generated an average of $1,650 gross profit per vehicle and that rose to $2,179 in FY2015.

CarMax will buy used cars regardless of age, condition, make or mileage and that offers consumers the ability to sell their vehicle quickly. However, as CarMax largely sells vehicles at its stores aged between one and six years, the leftover vehicles are sold into a strong secondary market for older used cars via auctions.

CarMax has 62 auction locations and operates the second largest auction operation in the United States. These wholesale auctions are only for licensed automobile dealers, not the public, and are very efficient with a sales rate of 97-100% at every auction, which is very favorable to other large auction firms that sell about 60%. 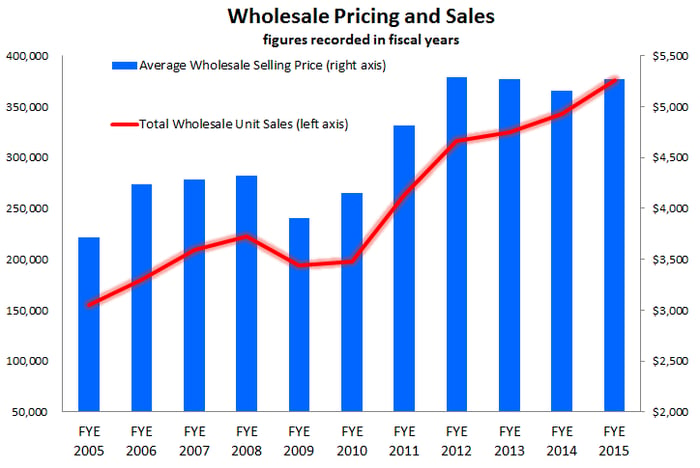 Despite average selling prices of wholesale units being far below that of newer used vehicles at CarMax stores, the company has drastically improved its gross profit per wholesale unit: increasing from an average of $359 per unit in 2004 up to $970 per unit average in fiscal year 2015.

Moving along, the next business segment is one that's intertwined with retail: ESP/service.

When consumers buy a vehicle at CarMax the company also offers extended protection plans on behalf of unrelated third parties, and CarMax receives commission income. Extended service plans are also offered, and all CarMax stores provide vehicle repair service which includes repairs of vehicles covered by said ESPs. These ESP/EPP and repair services generated an average of $420 gross profit per retail unit in fiscal year 2015, which is a decent chunk of incremental cash.

Lastly, and certainly not least, is CarMax Auto Finance, or CAF.

CAF is the 7th largest originator of used car loans in the United States, and is an intriguing business for CarMax. CarMax offers financing alternatives for retail customers through CAF as well as several third party finance providers. Some of those third party providers pay CarMax a fee for providing consumers needing to finance their vehicle purchase. On the flip side, CarMax actually pays some of its third party finance partners to finance customers that would otherwise be unable to receive finance assistance – thus, closing the deal on sales that would have been otherwise lost.

It's been a profitable business for CarMax and CAF income has increased 67% from fiscal year 2011 to fiscal year 2015. That growth is primarily because CAF grew its average managed receivables from $4.2 billion to nearly $8 billion during that same time frame. CAF income and receivables should only continue to grow as more stores open, more units are sold, and average transaction prices at retail increase.

Looking back on those business segments just covered, it's clear that CarMax has been growing its businesses efficiently, but here are a few points that show the growth story has plenty of room to run.

Down the road
As you can see below, there are plenty of markets untapped by CarMax and plenty of opportunities exist in the western half of the United States. 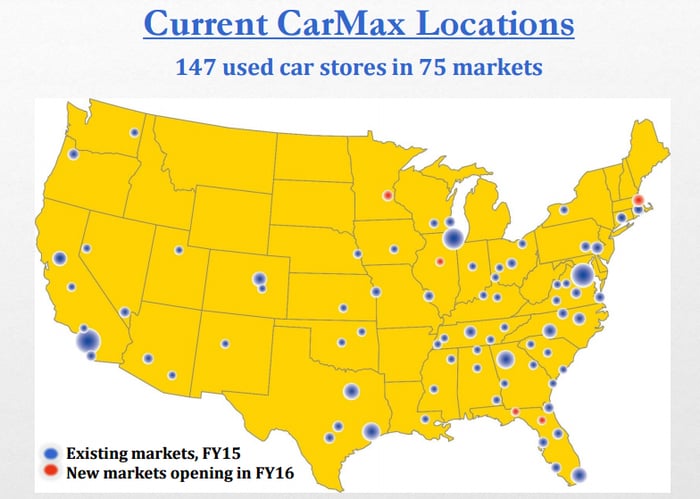 In fact, to help drive that growth potential home for potential investors, currently CarMax stores only reach about 63% of population. CarMax's market share for vehicles aged 0-10 years is approximately 5% in the markets it has entered, and only 3% nationwide – there is plenty of room for growth in sales and market share.

In an attempt to reach more of the U.S. consumer population CarMax plans to open 13 to 16 new stores annually and could be operating as many as 190 stores by the end of fiscal year 2018, up from 147 currently. In addition to new stores generating more units sold and gross profit, it should be noted that CarMax has averaged – though, varying wildly year to year – 5% growth annually in comparable store sales.

To help fuel its comparable store sales, CarMax is focusing on improving its in-store experience as well as its online presence. The company plans to remodel approximately 15 stores in fiscal year 2016 which will help older stores become more competitive in attracting consumers. Also, CarMax.com has been improved recently with better functionality including the ability for consumers to hold cars, set appointments, and initiate transfers. The CarMax website's average visits were up 16% in fiscal year 2015, compared to the prior year, for an average of 14 million users per month.

In addition to the CarMax website, the company also has substantial opportunity to develop its mobile app, which is an important factor investors often overlook when considering CarMax.

The reason having an efficient mobile app presence is critical is because it helps attract a younger car buyer, millennials in particular. TrueCar, predicts that millennials will purchase 4.24 million cars and light trucks this year which is worth an estimated $135 billion in total revenue. What's also interesting is that TrueCar found millennials were heavily represented on its mobile market place with millennial buyers increasing by 78% from 2013 to 2014, which outpaced millennial participation increase in the overall auto market by 50%.

So, now that we've covered how CarMax operates and that there is still plenty of growth ahead, is the business vulnerable to competitors?

It's all about the moat
Businesses that solve problems, create value, and have a sustainable competitive advantage are typically big winners over the long haul. CarMax doesn't have a strong economic moat, as nothing stops potential competitors from trying to copy its business model, but it does have some strong competitive advantages.

Consider CarMax a used-vehicle expert with over 21 million vehicles appraised and over 5 million vehicles retailed. That's information spanning more than two decades that competitors can't buy and it enables CarMax associates buying consumer vehicles to have the best pricing information through its national pricing algorithm. Its efficient pricing is part of the reason CarMax retails more than 99% of the vehicles that go on its store lots as well as maximizing its gross profit per vehicle, according to Morningstar.

Another advantage for CarMax is its sheer size and ability to scale and bring down costs. For instance, CarMax invested in a production line for its reconditioning facilities – because vehicles CarMax buys need to be prepped and inspected to be ready for retail sale – which raised gross profit by about $250 per vehicle. As CarMax expands its number of stores and increases units reconditioned and sold, overhead costs will continue to drop while gross profits will move higher. Since CarMax is the largest used car dealer in America its size and scale will be tough for competition to copy.

All in all, CarMax finds itself in a sweet spot for the automotive industry. It doesn't have to manufacture vehicles, which is a very capital intensive and low margin business, and it doesn't have to rely on any one vehicle make or brand for sales success.

If you're looking for a cheap stock, CarMax might not fit the bill. CarMax stock has increased 267% over the past five years and trades at 24 times its forward price/earnings. However, if you're willing to pay a premium for a company that's firing on all cylinders and has plenty of growth on the road ahead, CarMax is definitely worth further consideration.

Daniel Miller has no position in any stocks mentioned. The Motley Fool recommends CarMax. The Motley Fool owns shares of CarMax. We Fools may not all hold the same opinions, but we all believe that considering a diverse range of insights makes us better investors. The Motley Fool has a disclosure policy.