Please ensure Javascript is enabled for purposes of website accessibility
Log In Help Join The Motley Fool
Free Article
Join Nearly 1 Million Premium Members And Get More In-Depth Stock Guidance and Research
By Daniel B. Kline – Jun 14, 2015 at 11:31AM

The company leads online ad sales because its system is essentially perfect.

The company has an ad product for everyone. It can sell ads to the biggest multinational corporations with budgets in the tens of millions and it can sell them to the individual with just a few dollars to spend. If you have a dollar and a dream the search giant can put your advertising in front of a consumer likely to click on it.

The company has an ad platform for every need as well. It sells everything from simple, targeted search-driven ads through its AdWords platform to full-on video ads on its YouTube platform. It also has its AdSense network which serves everything from traditional banners to link-based ads on its vast network of partner sites.

Google may dabble in hardware, driverless cars, and who knows what else, but it makes the bulk of its money on advertising. 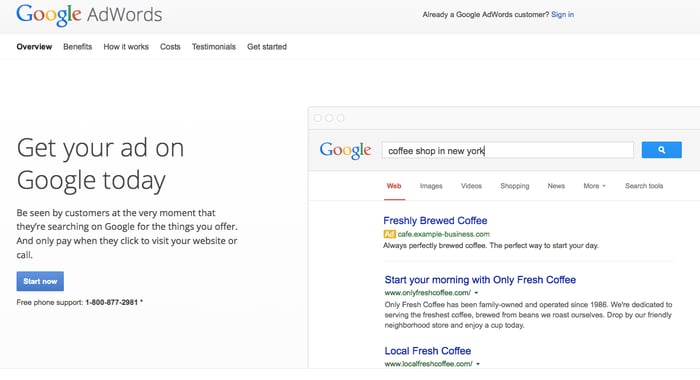 Google's AdWords makes it so anyone and any company can advertise on search results. Source: Google

Even if it falters a little, it's nearest competitor Facebook (META 3.01%) was expected to have under 3% in of the total U.S. market in 2014 growing to 3.7% by 2016. The company has also been successful in transferring its business to the increasingly mobile world, according to eMarketer.

In 2016, together Google and Facebook will take a 15% share of the $200 billion total media advertising market. Mobile ads on Facebook will total 68% of its U.S. ad revenues this year, up from 46.7% last year, eMarketer estimates, and while Google's ad revenues in the US won't flip to majority-mobile until 2016, they're shifting quickly. This year, Google's US mobile revenues will comprise only 36.8% of its overall ad revenues, but by 2016, the medium will account for 65.8%.

Google is the giant in the space and that's unlikely to change anytime soon.

Google makes how much in ads?
In the first quarter of 2015 Google took in $17.3 billion in revenue, up 12% year over year. Nearly all of it -- $15.5 billion -- came from advertising sales. About $12 million of that came on the company's own sites with the rest being derived from its network.

Google is an ad-driven company with everything else it does amounting to an essentially trivial piece of the business (which is amazing to say for activities that produced $1.75 billion during the first quarter.

The search leader has it down
Google's ad business works because search and advertising are such a great marriage. When I'm on Facebook, I'm not necessarily looking to buy anything. But, if I search for "summer camps in Hartford, Connecticut" or "Florida vacation deals" on Google, I'm not only declaring my intention to possibly buy, I'm asking the company to lead me someplace that will sell me what I am looking for.

Once I type that search, I'm not likely to care whether I click on a non-paid "organic," search result or one that Google has been paid for. It's all about delivering a search result that meets my needs and Google has done an excellent job of doing just that.

Why Are Google's Founders Back After the Recent Layoffs?
405%