The most common valuation metric investors use to determine if a stock is "cheap" or "expensive" is the price-to-earnings, or P/E, ratio. But even though this is a useful way to compare the price of most common stocks, the P/E ratio isn't as effective when it comes to real estate investment trusts, or REITs. Here's why: 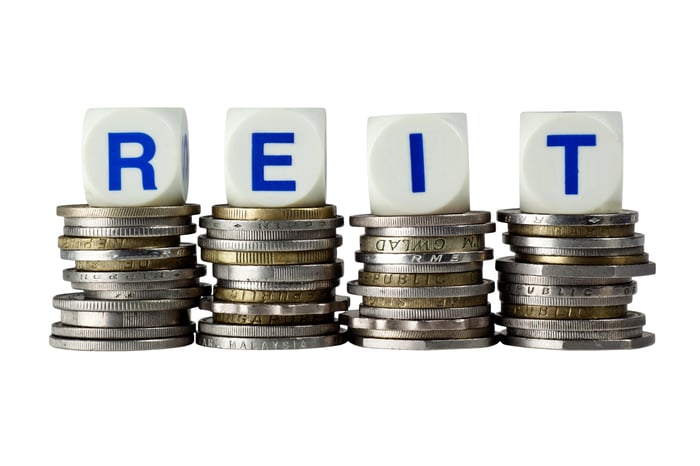 Equity REITs make their money by acquiring or developing properties, and then renting those properties to generate income. Most equity REITs specialize in a specific property type, such as apartment buildings or healthcare facilities.

Mortgage REITs, on the other hand, make money by borrowing funds at low, short-term interest rates and then using the proceeds to purchase mortgage-backed securities that pay higher rates. The profit they earn comes from the "spread" between the two. Moreover, in order to deliver the double-digit returns on equity that investors demand, mortgage REITs typically use significant leverage. It's for this reason that these companies are generally riskier investments than equity REITs -- for a more thorough explanation, here's an article solely about mREITs.

Why P/E ratios are ineffective when it comes to REITs
Investment in physical real estate have one expense in particular called "depreciation" that throws off earnings calculations. Businesses are often allowed to "depreciate" the value of assets over time (including real estate). This means that they can write off a certain amount of each asset's value every year. But while this looks like a business expense on paper, it's not actually costing the company anything.

Let's say, for example, that a certain equity REIT brought in $100 million in rent and spent $50 million in operating expenses during a quarter. On top of this, the REIT depreciated $70 million worth of its real estate portfolio, which similarly shows up as an expense on its profit and loss statement. At first glance, it looks like the REIT lost $20 million for the quarter. But remember, the $70 million depreciation "expense" didn't actually cost the company anything -- it's just on paper. So, in reality, the company made $50 million, even though its income statement shows a $20 million loss. This is why earnings, and therefore P/E ratios, are ineffective metrics for determining an equity REIT's profitability and valuation.

Mortgage REITs are another matter. Because the value of the securities mortgage REITs own change considerably over time (which doesn't affect the flow of income), the generally accepted net income calculation doesn't work. This follows from the fact that a mortgage REIT's earnings include unrealized gains and losses on interest rate swaps, the gains and losses on the disposal of investments, and certain other non-recurring gains and losses. In short, it includes a bunch of numbers that, like depreciation, don't actually affect an mREIT's income insofar as cash flow is concerned.

The numbers to look at
A better metric to evaluate equity REITs is funds from operations, or FFO. This starts with a company's net income, but then adds its depreciation expense back in. It also adds in amortization expense and subtracts any gains that result from the sale of property. By doing so, FFO measures the amount of money a REIT is actually bringing in from its business activities.

Take a look at how the P/E and FFO of some of the major equity REITs compare. As you'll see, unlike the P/E ratios, these companies' price-to-FFO ratios are more consistent with what you'd expect from a stock whose primary goal is to generate a predictably growing income stream.

Note: Ratios are current as of 6/10/15. Figures obtained from company financials.

For mREITs, the number to take notice of when reading an earnings report is the "core EPS" or "comprehensive income", depending on which company's report you're reading. This is the number that excludes the non-recurring gains and losses I mentioned earlier.

For example, Annaly Capital Management, the biggest publicly traded mortgage REIT in the United States, shows an EPS loss of $0.52 per share on its most recent earnings report, but has a "core EPS" of a positive $0.25. On an annualized basis, this translates to a price-to-core-earnings ratio of about 10, which makes sense for an investment that uses significant leverage and thus exposes investors to more risk than, say, a consumer goods company does.

Make sure you use the right metrics
The takeaway here is to make sure you're looking at an accurate picture of how much money a REIT is making (or not making), in order to make a fully informed decision. These stocks can be a high-performing part of any long-term investor's portfolio, and it's a shame when people don't consider REITs because P/E ratios indicate they are "money losers."

Matthew Frankel owns shares of Realty Income. The Motley Fool recommends Health Care REIT. We Fools may not all hold the same opinions, but we all believe that considering a diverse range of insights makes us better investors. The Motley Fool has a disclosure policy.

Why These Top REITs Rallied More Than 10% in January

McDonald's and ExxonMobil Have News for Investors
409%