As has been the case for 16 of the past 21 years, Bill Gates for 2015 topped the Forbes list of the world's richest people. At last count his net worth totaled $79.4 billion, which is well ahead of No. 2 Carlos Slim's $70.8 billion. However, Gates actually could have been much farther ahead of Slim, and the rest of the pack, if not for the fact that he has become very philanthropic over the past few years.

How did Bill Gates become the richest man in the world?

Bill Gates' vast net worth comes from co-founding Microsoft (NASDAQ:MSFT). The company was an early leader in providing software for personal computers and has since become the world's largest personal computer software company. As Microsoft's top individual shareholder for most of its existence, Gates' net worth skyrocketed along with stock price, which as the chart below shows has had quite a nice run over the years. 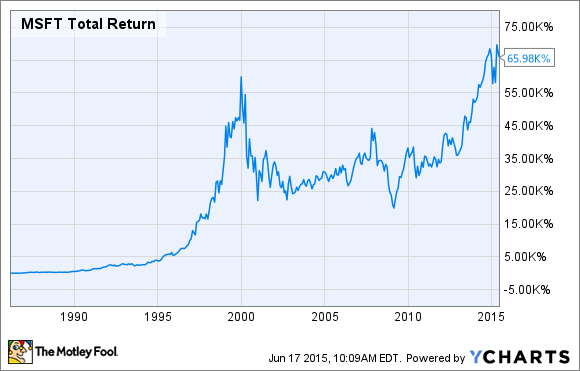 That strong stock price appreciation has already minted three billionaires, including Gates, and more than 12,000 millionaires just among Microsoft employees.

Why Bill Gates could have been richer
While Gates has become the richest man in the world by holding on to the bulk of his Microsoft stock over the years, he could have been a whole lot richer. Instead, he has donated a growing portion of his wealth to the Bill & Melinda Gates Foundation. Since founding the organization over a decade ago, the couple has donated nearly $30 billion to the organization, which is roughly a third of their net worth. In fact, last year alone Bill and Melinda Gates were the top philanthropists in the country as they donated $1.5 billion in Microsoft stock to the foundation. For perspective, that was $500 million more than the next biggest giver in 2014.

That said, while Gates has donated a good deal of his net worth, he has gained riches that to him are far more valuable than money. That's because he is using his riches to improve the lives of others around the world. Among his priorities is to ensure that every child has access to a healthy and productive life, and that includes an effort to eradicate childhood polio from the Earth.

More broadly, his foundation provides financial services for the poor; improves agricultural development; supports water, sanitation, and hygiene projects; offers grants to combat polio and other diseases; and supports libraries and education; among many other things. By providing these services, Gates is working to make the world a better place for everyone, and that to him is what it means to be truly the richest man in the world.

Takeaway
We'd all like the title of richest person in the world, or at least to be a little richer than we are right now. However, if Gates has taught us anything, it's that true riches aren't found in the number of our net worth, but in what we're doing for others.

Who Is the Richest Man in the World? @themotleyfool #stocks $MSFT Next Article
Current