Please ensure Javascript is enabled for purposes of website accessibility
Log In Help Join The Motley Fool
Free Article Join Over 1 Million Premium Members And Get More In-Depth Stock Guidance and Research
By Reuben Gregg Brewer – Jun 23, 2015 at 7:05AM

Nuclear power has a bad name, but that shouldn't stop demand growth. Still, the commodity downturn is hurting this uranium supplier today.

Like most traditional miners, Cameco Corporation (USA) (NYSE: CCJ) is cutting costs and refocusing on its best prospects to weather a weak commodity market. But that doesn't change the fact that investors in the world's largest publicly traded uranium miner are hurting today.That said, global demand for clean power should ensure its future prospects as demand from Cameco's nuclear power plant customers builds.

Nuclear power
Although nuclear power has a bad name, it happens to be a low-carbon fuel option with a pretty good record on the safety front. The problem is that when things go wrong, they go wrong in a big way -- leaving people with a distorted impression of the dangers (sort of like the airline industry).

In fact, despite the lingering impact of Japan's Fukushima disaster, Cameco expects there to be 13 more reactors up and running at the end of this year than at the start, with nearly 70 more in the pipeline out to 2024. That means total projected uranium consumption of 230 million pounds in 2024, even though primary production at existing global mining operations will be 140 million pounds if no new supply is added. There's a reason to like the prospects, here.

Down, down, down
But that's tomorrow, not today. Today, uranium is trading hands at low prices, and demand isn't as robust as Cameco and other uranium suppliers might like. Thus, the company's top line has been relatively stagnant since 2011. Putting numbers on that, revenues were roughly $2.4 billion in 2011 and roughly $2.4 billion last year. Production increased around 4% over that span.

While the top line has been in neutral, however, the company hasn't stopped spending on growth, preparing for what it believes will be a bright future. So, cash used in investing activities went up each year between 2011 and 2013, increasing from $530 million to $850 million. Last year, that number was about $20 million, but that included the proceeds from the $450 million sale of the company's 32% stake in four nuclear power reactors. So, it was lower than in 2013, but not as low as it seemed. Cameco is hoping to trim spending again this year, too.

One thing that hasn't gone down after the spending binge is debt. Long-term debt has gone from around $800 million in 2011 to roughly $1.5 billion last year. That makes sense, since the top line has been treading water while growth spending increased. Now, to be sure, debt isn't at an onerous level, at only around 20% of total capital. However, interest expense jumped nearly 10% last year, and the dividend hasn't been increased since 2011, after more than five years of annual hikes. 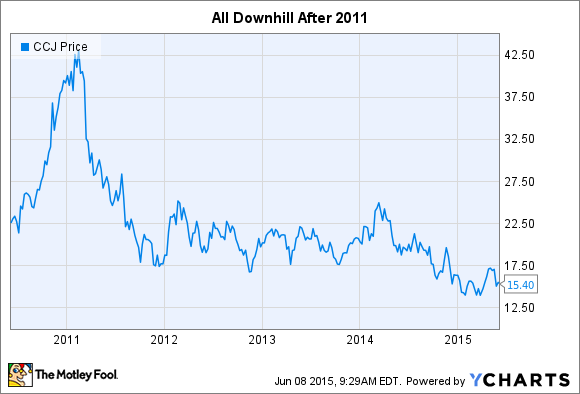 It's hard to suggest that Cameco is in any financial danger; however, that doesn't mean it's doing well right now. In fact, it's been a rough few years for the company -- and for investors. While the spending Cameco is doing is vital to maintaining its current mines and preparing for future demand, it certainly isn't helping things right now. The problem, of course, is that building a mine is a long, complex, and expensive process. If you wait until demand materializes, you'll be late to the party -- and might even miss the opportunity.

The other side
If you can look past the negative view of this clean fuel option, there are a lot of positives in the nuclear power space. You wouldn't know it from looking at Cameco today, one of the industry's big suppliers, but that could be a buying opportunity for long-term investors. The company has taken on debt to build for the future and stopped rewarding shareholders with annual dividend hikes, but it looks like Cameco's financial house remains in solid shape, and management is making prudent business decisions. All of that, of course, suggests it will easily make it to the other side of this industry soft patch.