Fitbit had a blockbuster IPO last week, but investors should keep an eye on the company's user base.

Last week, Fitbit (FIT) soared out of the gate after completing one of the most anticipated IPOs of the year. Shares were expected to price at $17 to $19, but the offer ended up priced at $20 per share. By the end of the week, shares closed at $32.50. Perusing the prospectus and looking at the company's financial performance over the past few years is enough to get any investor drooling. Just look at how the company's revenue has skyrocketed to over $745 million in the past few years. 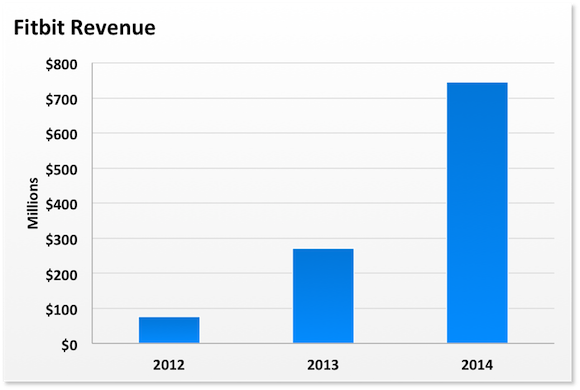 Similarly, the number of devices sold (10.9 million in 2014) and total number of active users (9.5 million at the end of Q1 2015) has been steadily climbing to drive that revenue growth.

Fitbit undeniably has a lot going for it right now, but there's still one important red flag that investors can't ignore.

How active are active users?
Fitbit reports the number of active users as a key operating metric. For starters, this is how the company defines an active user:

We define an active user as a registered Fitbit user who, within the three months prior to the date of measurement, has (a) an active Fitbit Premium or FitStar subscription, (b) paired a health and fitness tracker or Aria scale with his or her Fitbit account, or (c) logged at least 100 steps with a health and fitness tracker or a weight measurement using an Aria scale.

Meanwhile, Fitbit separately discloses the total number of registered users it has on its platform. It turns out that there's quite a discrepancy between the two, and roughly half of its registered users can be considered active users. That's a red flag. 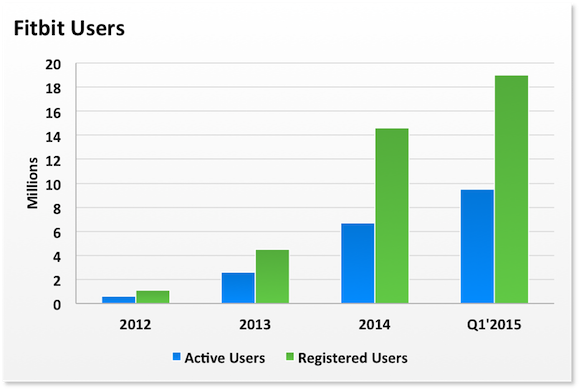 At the end of the first quarter, there were 9.5 million active users and 19 million registered users. The potential risk that's implied here is that a large portion of Fitbit customers who register an account eventually become inactive. In a worst-case scenario, their Fitbit device sits in a desk drawer somewhere gathering dust. As negative as that may be for a person's health, it also carries a specific risk to Fitbit's long-term business prospects.

Fitbit is all about hardware ... for now
Fitbit has been trying for years to expand into premium subscription services. Fitbit Premium costs $50 per year and offers things such as benchmarks, sleep reports, activity reports, food reports, and a personalized 12-week fitness plan. Earlier this year, Fitbit acquired FitStar, a service that provides video-based exercises, which costs $40 per year. The services are natural add-ons that Fitbit hopes will appeal to its growing user base. However, the company has seen limited success with getting customers signed up for Fitbit Premium after it was launched in 2010. Less than 1% of revenue comes from subscription services:

While Fitbit does hope to expand into subscription-based services in the future, which could drive revenue growth, increase engagement, and diversify the business, the fact remains that right now this is predominantly a hardware business. For a hardware business, Fitbit is putting up undeniably impressive gross margins (50% last quarter), but in the long term, all hardware businesses rely on sales to new adopters or upgrades from existing users.

The market for wearable fitness-tracking devices is so young that there are certainly still plenty of adopters out there, especially when you consider that Fitbit sells its devices in over 50 countries. But converting adopters into upgraders is a key effort for the company long-term, given its uninspiring attempts to grow subscription services.

None of this is to say that Fitbit's hardware business is doomed. Fitbit could have many years of incredible growth ahead, but eventually investors will want to be confident in Fitbit's ability to sell upgraded devices for recurring revenue.

The active user metric is not a measure of the levels of continuous engagement of our individual users over periods of time and does not track the number of individual users that have become inactive on our platform in a period. Instead, the active user metric, as of any given measurement date, represents an aggregate of both existing and new users who have met the definition of an "active user" on one occasion during the previous three months, whether that user became newly active or was an existing active user from a prior period.

Accordingly, this metric does not take into account the extent to which inactive users are offset by new active users or how long an individual user remains active. Given the recent rapid growth of the number of users on our platform, it may be difficult to discern whether the growth in active users is the result of retaining existing users or adding new users onto our platform... Therefore, you should not rely on our active user metric as an indicator of the level of user retention of individual users or of continual user engagement, nor the potential size and growth of our user community as an indicator for other revenue opportunities, such as subscription-based premium services and our corporate wellness offerings.

Active users may not be a comprehensive representation of how engaged Fitbit's users are, but there is still some important information to keep an eye on here. That's especially true in the absence of any other engagement metrics, since Fitbit doesn't track churn, retention rates, or when users become inactive. Maybe it should.