Westmoreland Coal Company (NASDAQ: WLB) probably isn't a name you've heard of unless you follow the coal markets pretty closely. However, it happens to be one of the miners that's actually doing pretty well despite the coal market's deep and long downturn. Here's how this company is doing it. 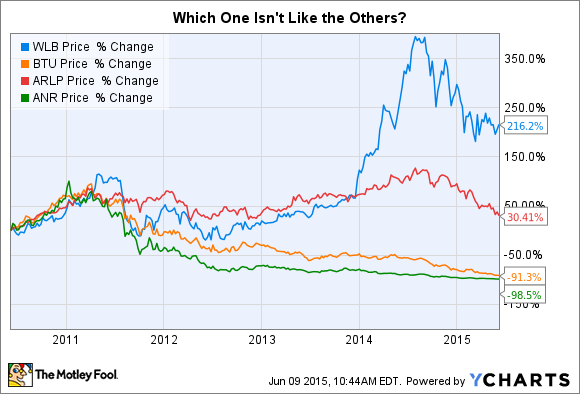 Not your typical miner
Most coal companies go where the coal is. That often means mining long distances from customers. Not Westmoreland: it flips that model around and goes where the customer is. Of course, there has to be coal where the customer is, but it specifically highlights buying coal properties that are next to, or at least very close to, end customers.

That proximity gives Westmoreland an edge over other miners, because it reduces transportation costs. It has 11 mines that are located right next to customers, often called mine-mouth mines. Its two other mines are "close" to customers. For example, according to the company, its Absaloka mine has a "300+ mile rail advantage over other [Powder River Basin] competitors." The value of that? "The 50%-100% increase in rail rates in recent years has improved Absaloka's competitive position." In other words, being closer is better.

In fact, according to the company, it can deliver coal for an average of about $1.70 a ton. That's below the costs available from any mining region in the United States. No wonder Westmoreland's customers are willing to sign long-term contracts, stretching out as far as 2055 in one instance. 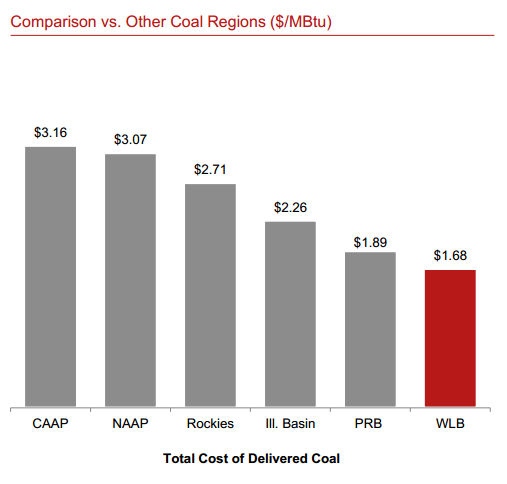 The weighted average contract length, however, is currently just around ten years (to 2025). Roughly 90% of its contracts are long-term and include protections against commodity price changes. About half of its contracts also offer some protection against reduced customer demand.

Westmoreland's revenues have actually gone up in each of the last three years. That said, its bottom line is filled with red ink, including a nearly $11-a-share loss in 2014. However, 2014's loss was driven by one-time items related to debt extinguishment and merger costs. And if you add back in non-cash items like depreciation, the company has actually been free cash flow positive in each of the last five years. 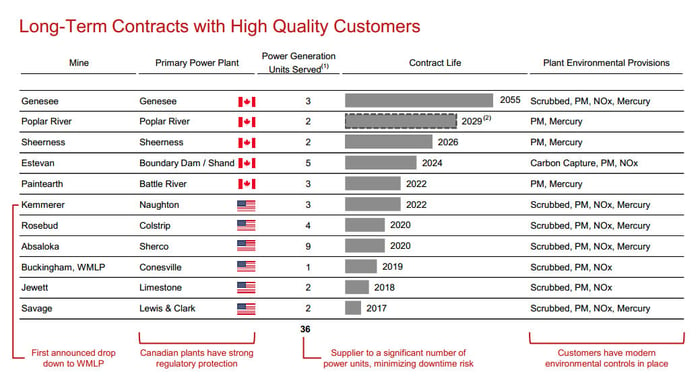 A growth engine?
So Westmoreland is doing pretty well right now despite the weak coal market, and has contracts that should keep it on a solid foundation well into the future. But it recently did something else that should put it in a strong position to grow via acquisition: it bought Oxford Resource Partners (since renamed Westmoreland Resource Partners (WMLP)), a limited partnership. This gives Westmoreland access to financing via the sale of its mines to the partnership, called drop downs. This frees up capital for Westmoreland to put to work buying new assets to spur growth. It believes there are between 15 and 25 mines that would be a good fit with its portfolio.

This works well, because Westmoreland is the general partner of the partnership and a major unit holder. So it keeps control of the mines, gets limited partner distributions to support revenues, and is in line for incentive payments as distributions increase with additional drop downs. And, as noted above, it gets to use the cash it receives from drop downs to buy more coal mines that can eventually be dropped down. Wash, rinse, repeat... not a bad deal.

Worth a closer look
There's no question that the damage to the coal industry has been widespread and deep. And Westmoreland hasn't exactly avoided all of the downturn's pain. However, its business model is differentiated, and it's protected the company from the depths of suffering that its peers have experienced. Better yet, Westmoreland is positioning itself to take advantage of the downturn to grow its business, unlike most competitors, who are simply trying to survive. If you are looking for a contrarian play, Westmoreland is a coal miner worth a deeper dive.