It's been almost three years since Microsoft (NASDAQ:MSFT) took a massive and painful $6.2 billion goodwill impairment related to its misguided acquisition of aQuantive. At the time, Microsoft desperately wanted, and needed, to strengthen its online advertising business. So desperate, it seems, that it paid an 85% premium.

Incredibly, the writedown represented 98% of the total $6.3 billion price tag. Needless to say, it didn't work out.

What will Microsoft's next massive writedown be? Will it be Skype? Or will it be Nokia's handset division? I bet it's the latter.

$10 billion qualifies as massive
When Microsoft closed its acquisition of Nokia's handset business last year, the final price tag actually ended up a fair amount higher than originally announced. The $7.2 billion deal turned into a $9.4 billion deal. Here's how Microsoft allocated everything that it got for all that money.

That's an incredible amount of goodwill and intangible assets associated with this deal. We're talking about $10 billion that's sitting on the balance sheet, waiting to get written down if the flashy handset acquisition doesn't work out as well as planned.

Microsoft notes: "Goodwill was assigned to our Phone Hardware segment. The goodwill was primarily attributed to increased synergies that are expected to be achieved from the integration of NDS." That's an awful lot of "increased synergies" that Microsoft hopes to realize given that it's never been in the phone hardware business before.

Microsoft is also warning you loud and clear
Don't just take my word for it. Microsoft has directly acknowledged that a possible goodwill impairment for its phone hardware division may be on the horizon. The company sold 8.6 million Lumia units last quarter, bringing in $1.4 billion in revenue in the process. Here's CEO Satya Nadella on the April earnings call:

We continue to demonstrate momentum in the value smartphone segment of the phone market, driving 18% growth in Lumia volumes this quarter. However, we need to take further action to reduce our costs across devices as we execute on our Windows 10 first-party hardware plans.

CFO Amy Hood also had a little bit to add:

We've made significant progress in reducing the operating expense base in the phone business. Moving from an annualized rate of $4.5 billion at acquisition to a run rate under $2.5 billion. That said, the changing mix of our portfolio to the value segment and the significant negative headwind from FX will impact our ability to reach operational breakeven in FY16.

If that wasn't enough, the subsequent 10-Q filing makes it plain and clear (emphasis added):

The valuation of acquired assets and liabilities, including goodwill, resulting from the acquisition of NDS, is reflective of the enterprise value based on the long-term financial forecast for the Phone Hardware business. In this highly competitive and volatile market, it is possible that we may not realize our forecast. Considering the magnitude of the goodwill and intangible assets in the Phone Hardware reporting unit (see Note 8 – Business Combinations of the Notes to Financial Statements), we closely monitor the performance of the business versus the long-term forecast to determine if any impairments exist in our Phone Hardware reporting unit. In the third quarter of fiscal year 2015, Phone Hardware did not meet its sales volume and revenue goals, and the mix of units sold had lower margins than planned. We are currently beginning our annual budgeting and planning process. We use the targets, resource allocations, and strategic decisions made in this process as the inputs for the associated cash flows and valuations in our annual impairment test. Given its recent performance, the Phone Hardware reporting unit is at an elevated risk of impairment. Declines in expected future cash flows, reduction in future unit volume growth rates, or an increase in the risk-adjusted discount rate used to estimate the fair value of the Phone Hardware reporting unit may result in a determination that an impairment adjustment is required, resulting in a potentially material charge to earnings.

That aforementioned forecast that Microsoft is referring to is the completely unrealistic "strategic rationale" that Microsoft put together when it initially announced the blockbuster deal, assuming that it could ship more than 250 million units in 2018 with an operating margin of 5% to 10%. Keep in mind that, in the last quarter before the deal closed, Nokia's handset business reported a negative operating margin of 17%. 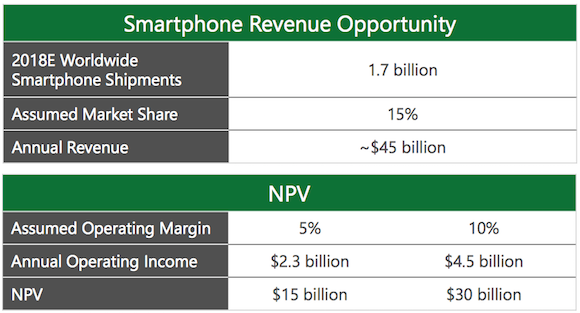 This initial forecast may have been a tad bit too optimistic. Source: Microsoft.

Brace yourselves, Microsoft investors... a goodwill impairment is coming.