Are you looking to buy into the idea that the agricultural sector is going to bottom out this year? If so, you would be in good company, because Warren Buffett has been buying stock in agricultural machinery giant Deere & Co. (NYSE:DE). But is that the best stock for individual investors? Which stock in the sector should you prefer, and why? Let's look at the leading candidates in the agricultural machinery sector and some of their key metrics for 2015 and 2016.

Buy when it's low
The investment case for buying into the sector is that this year is expected to be the trough in the cycle for the agricultural sector. Essentially, spending on agricultural machinery tends to correlate with farmers' incomes, which, in turn, usually depend on crop prices. Unfortunately, as shown in the chart below, key crop prices remain in a downtrend. 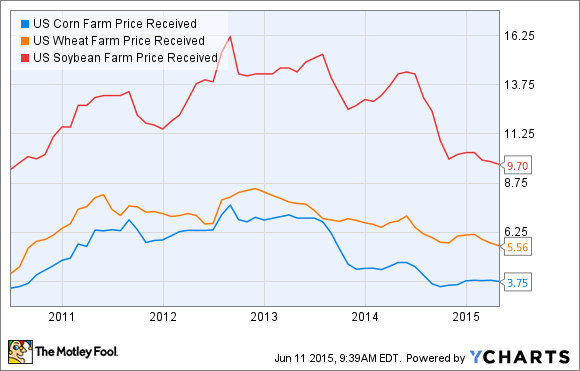 Deere predicts that U.S. farm cash receipts will fall for a third straight year in 2015. Of course, there is no guarantee they will rise in 2016. However, one argument is that crop prices could rise in the future due to crop-growing conditions (usually weather) being less favorable than in recent years. When crop yields are high, supply is plentiful and prices tend to fall.

Indeed, growing conditions have been exceptional in the last couple of years, which led to high crop yields and therefore low crop prices. 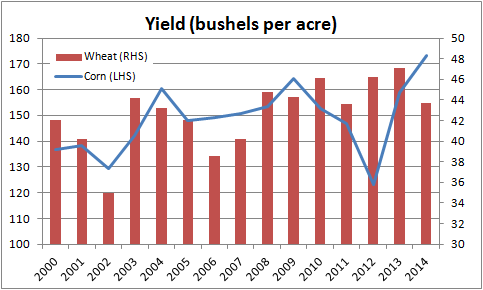 Which company is best placed?
In a nutshell, buying into agricultural machinery manufacturers is a recovery play. However, things could get worse in the near term. Indeed, all the leading companies forecast some dramatic declines in revenue this year. That said, which one is best placed to recover?

One way of answering this question is to look at inventory-to-sales ratios. When sales fall, companies often have difficulties clearing inventories, which can lead to write-offs as machinery becomes obsolete or is likely to sell for less than the company expected. Therefore, it's crucial for the leading companies in the industry to be in control of their inventory position.

Here is a look at long-term inventory-to-sales ratios at Deere, AGCO Corp. (NYSE:AGCO) and CNH Industrial NV (NYSE:CNHI). A lower ratio is good, because it means a smaller inventory a company must carry in order to generate sales. The chart shows Deere is better placed than its peers, and the company has made efforts to reduce inventory in preparation for the 19% sales decline the market anticipates for Deere in 2015. 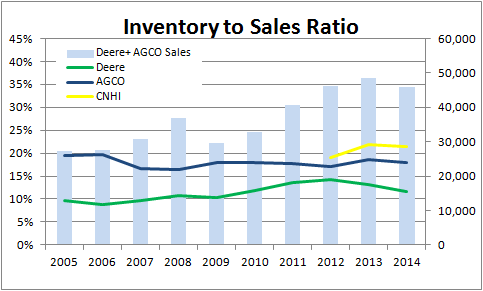 Two concerns
On this basis, Deere is probably the pick of the sector, but I have a couple of concerns. The first is that even if Deere is reducing inventory, its competition must do the same. In other words, if AGCO gets aggressive on pricing in order to reduce inventory levels, it could trigger a price war -- not good for Deere's margin.

Second, Deere is increasingly turning to leasing its equipment, and this could have consequences for the prices of used machinery when it goes up for sale. In other words, more used equipment on the market could pressure the prices and ultimately the valuations that Deere puts on its used equipment.

Moreover, a glut of used equipment on the market could force Deere to cut prices on its new machinery. For example, Deere's balance sheet showed a 31% increase in net equipment on operating leases to $4.2 billion on a year-over-year basis; this could become a concern if the market turns down again in 2016.

The takeaway
Deere looks like the best-positioned way to play a recovery in the agricultural sector, but I would argue that downside risk is rising due to the increases in leased equipment on the company's balance sheet. It probably won't be an issue if the market recovers, but it does suggest a greater downside risk if the agricultural market doesn't hit bottom this year.

On the other hand, if history is a guide, then crop prices will be cyclical, and investing in the trough usually makes sense for long-term investors.