One of the toughest pills investors have to swallow when investing in big pharma is the constant challenge of patent expiration. Blockbuster drugs that were generating billions of dollars in revenue can suddenly disappear from the income statement as their patents expire and generic competition enters the picture.

Losing a single drug can be painful enough, but investors can get really hurt when several key drugs lose patent protection around the same time. Just ask an Eli Lilly and Co (NYSE:LLY) investor, and they'll tell you all about it.

Patent expirations of blockbuster drug Zyprexa, Cymbalta, and Evista have taken a toll on the company's financials over the last few years. After revenue and earnings per share (EPS) peaked in 2011, the company has struggled to make up for the shortfall, and earnings have fallen by more than 50% since. 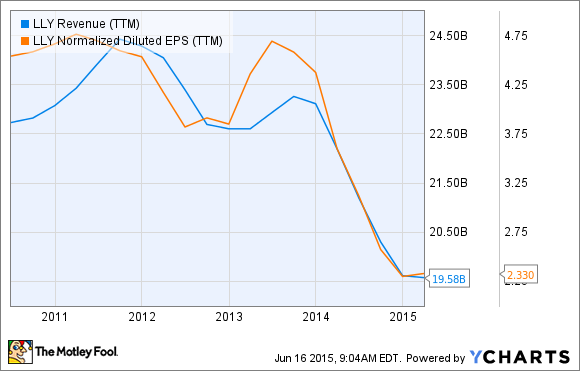 As difficult as these revenue losses have been for the company over the fast few years, it looks like there could be more pain on the way. Lilly has several key drugs that will be coming off patent in the next few years: 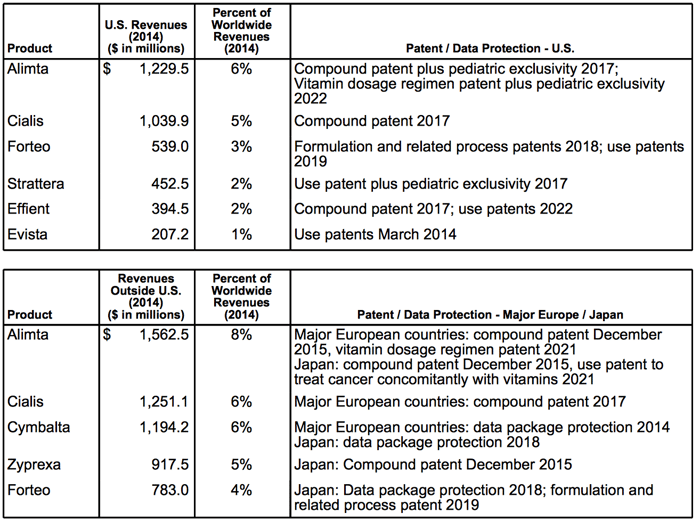 When you add up how much each drug brings in, the total represents a massive 48% of Lilly's 2014 revenue that could be at risk in the next few years. Altima alone was responsible for 14% of Lilly's 2014 revenue, and it will see its first leg of international patent protection disappear in December of this year. 2017 in particular appears to be an especially rough year for the company, as Alitma, Cialis, Strattera, and Effient all lose at least a portion of their stateside patent protection.

The biosimilar threat?
It should also be noted that Lilly has two key drugs currently driving billions of dollars in sales that are not on that list. Why aren't they on the list? Their patents have already expired!

Humalog and Humulin, which are insulins used to treat diabetes, have already lost their patent protection. Despite that fact, worldwide revenue from these products continue to grow for the company. How can that be?

The reasoning has to do with the category of drug into which these two fall. Humalog and Humulin are biological products, which are different than conventional drugs that are chemically synthesized. In contrast, biological products are typically complex mixtures that are produced by a cell line derived from a living organism such as an animal, plant, bacterium, or virus. Since biologics are made from living organisms they are much harder to manufacture, as they are sensitive to heat and are susceptible to microbial contamination.

Historically, biologic drug patent expirations have done little to slow sales of the branded versions down, as competitors have thus far been unable to bring a 'generic' version of a biologic drug (which is called a 'biosimilar') to market.  However, there is evidence that the tide may be turning on the biosimilar front, as the FDA approved its first-ever biosimilar drug, Zarxio, in March of this year. While Zarxio is not a direct threat to Lilly (Zarxio is a biosimilar for Amgen's blockbuster drug Neupogen), the approval itself may provide a pathway to future approvals of biosimilar drugs. If that's the case, the door may finally be open for Humalog and Humulin copycats.

If that proves to be true, it could be real trouble for the company down the road, as those two drugs produced more than 21% of Lilly's 2014 revenue.

Is there any good news?
Lilly is certainly aware of these revenue challenges, and the company has made a few moves recently to try and navigate through them.

First off, Lilly recently purchased Novartis' animal health business, Elanco, for $5.4 billion, which is expected to add more than a billion dollars in revenue to Lilly's top line. In addition, the company expects an annual expense reduction of $200 million per year by 2018, which would be a nice profit center for the company if it can achieve its cost-savings goals.

Next, the company has eight compounds in phase 3 trials or under regulatory review aimed at treating a variety of indications such as pain, Alzheimers, and diabetes.In addition, Lilly is eyeing up biosimilars as not only a threat, but as a potential opportunity as well.

Of particular interest to me is Lilly's insulin glargine product, Basaglar (called Abasaglar in Europe), which is a long-acting insulin used to control blood glucose levels between meals. This product would be used alongside Lilly's current insulins on the market, filling a gaping hole left by a lack of long-acting insulin in the company's insulin franchise. Abasaglar is already approved in Europe and Japan, but U.S. approval is currently being held up by patent infringement litigation charges by Sanofi. If Basaglar can survive these legal challenges and take even a modest amount of market share from Lantus, it could certainly help to plug some of Lilly's revenue problems, as Lantus brought in more than $7 billion in revenue for Sanofi in 2014. .

Finally, Lilly is also exploring a few international partnership opportunities it's hoping will bear fruit in the coming years. Lily has announced a partnership with China-based Innovent Biologics in an effort to bring at least three cancer treatments to market over the next decade.  Lilly also has an exclusive license and collaboration agreement with Korea-based Hanmi Pharmaceutical to co-develop an oral drug that will be used to treat a variety of autoimmune diseases. That drug is currently in phase 2 clinical trials, so we still have a long way to go before we can expect any revenue to come from the partnership.

Wall Street turns bullish
We won't know if either of these partnerships or drugs in the pipeline will succeed financially for Eli Lilly for some time, but Wall Street has certainly liked what it's heard from the company recently. The stock is up more than 40% over the past year, and the price-to-earnings ratio is currently sitting above 40, making the stock look quite expensive to this Fool. 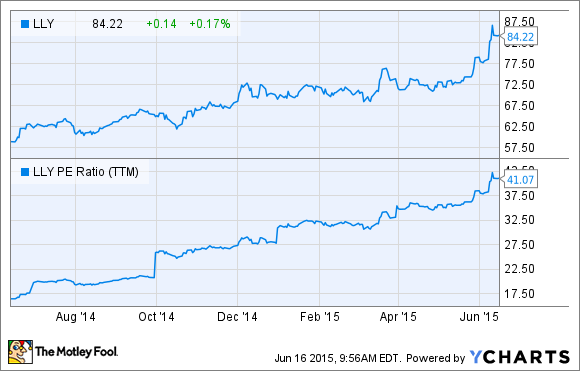 While it does appear Lilly may have some good things going for it, when I look at Lilly's stock price today, I see a whole lot of good news priced in and no fear of execution risk, which makes little sense to me. Given the coming patent expirations, the biosimilar threat from other companies, and the risky nature of the research and regulatory approval processes, I see a lot of risk for Lilly in the years ahead.

Personally, I wouldn't dream of buying Lilly's stock today at these levels, especially when other opportunities exist in the market that look much more promising.