Please ensure Javascript is enabled for purposes of website accessibility
Free Article Join Over 1 Million Premium Members And Get More In-Depth Stock Guidance and Research
By Jordan Wathen - Jun 26, 2015 at 10:10AM

We've been trained to compare ourselves quantitatively. In school it was SAT scores and grade point averages. In sports it is batting averages or completion percentages. In finance, it's our net worth and credit score. But as useful as these numbers might be, they are only valuable in context and by comparison.

FICO credit scores can range from 300 to 850. So far, not one person has ever received the absolute highest credit score. The closest was an Ohio man's report of an 848 score in 2012. The credit bureau noted that his score ranked "higher than 100% of U.S. consumers."

What was his reward for having the highest credit score? Not much, though he was approved for a Bass Pro Shops credit card.

How your credit score stacks up
A distribution of credit scores might help put your score in perspective. Good credit is about common as you might expect -- 40% of Americans have a credit score greater than 750. 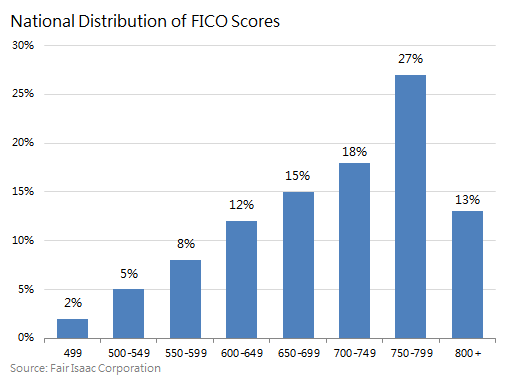 For all practical purposes, 750 is probably the highest practical credit score. I say the highest practical score because it is the score at which you'll qualify for most loans on the best terms. It would be quite difficult to have a 750 score if you had any late payments, or if you carried substantial balances on your credit lines. In other words, people with scores greater than 750 pay their bills on time and use responsible amounts of credit.

As an anecdote, mortgage insurer Fannie Mae considers all borrowers with 740 scores or better to be equal risks. Thus, there isn't any advantage to having an 850 score or 740 score for a Fannie Mae-insured mortgage. The benefits peak at 740.

The generally accepted breakpoints occur at 620 and 720. Below 620, a borrower is said to be "subprime." At 720 or above, a borrower has "excellent" credit, by most definitions, roughly in line with the median credit score of 723.

It's open to interpretation
There are 6,389 FDIC-insured institutions in the United States, a figure that doesn't include thousands of credit unions and many more non-bank lenders. As credit is just as much art as it is science, you can bet that if you asked every bank to examine the risk of a particular borrower, each would come up with a different opinion of his or her riskiness. After all, a credit score is just one of many factors that go into a bank's risk assessment, and all lenders weigh it differently.

But if you just want a target to shoot for, make it a score of 750. That will qualify you for the best terms on any loan, and you can get there by simply keeping your credit card balances low and paying all your bills on time. For all practical purposes, it is likely the highest credit score you'd ever need.