Learn two reasons why the worst of the oil crash might be over and which two companies could be your best bet to profit from a recovery in crude prices.

Ever since crude prices crashed from their June 2014 highs oil investors have been desperately searching for signs that the oil market might have finally bottomed. 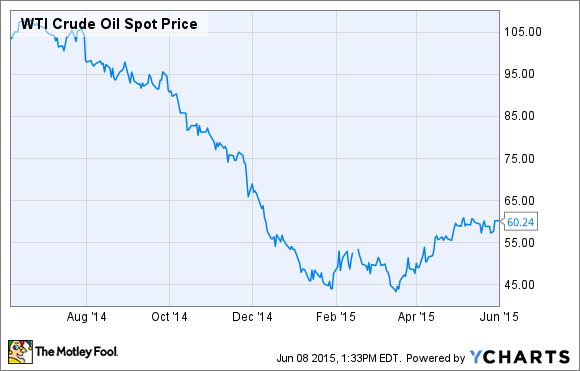 Let's examine two signs that the worst could indeed be over for the oil industry: a bottoming in domestic oil rigs, and tentative plans by low-cost oil producers to restart drilling soon. More importantly, learn why EOG Resources (EOG -4.73%) and Pioneer Natural Resources (PXD -1.84%) might be among the two oil producers best situated to take maximum advantage of this potential recovery in crude prices.

U.S. rig counts have collapsed by about 50% in the past year, but the rate of decline has leveled off as oil prices have recovered. What's more, in recent weeks several oil companies have begun to indicate that they might be prepared to start drilling again, and soon.

For example, EOG Resources has said it is willing to restart drilling as soon as oil prices stabilize around $65 per barrel -- recently, West Texas Intermediate, the American oil standard, is trading at $61 per barrel -- and Pioneer Natural Resources has indicated that it plans to increase its horizontal rig count by 20 between July 2015 and the end of the first-quarter of 2016. Meanwhile, Carrizo Oil & Gas, Devon Energy, and Chesapeake Energy Corp. have all recently raised their 2015 production estimates, indicating they may see the recovery in crude prices as genuine.

According to James Williams, president of energy consultant WTRG Economics in London, Ark., "This is an indicator that we're nearing the end of the bust. ... What we're going to see now are mixed signals from the different basins as we near the bottom of the cycle."

Oil prices are notoriously difficult to predict in the short term, so Mr. Williams' statement must be taken with a grain of salt. However, EOG and Pioneer do have certain competitive advantages that make them excellent long-term oil investments, particularly if the oil recovery proves lasting.

Sharp focus on cost optimization
In the past few years, as oil prices remained consistently high, many oil producers fell into the trap of overspending in an effort to raise output at any cost. EOG and Pioneer have proven exceptions to this trend, focusing instead on improving their drilling techniques and lowering per-well drilling costs. 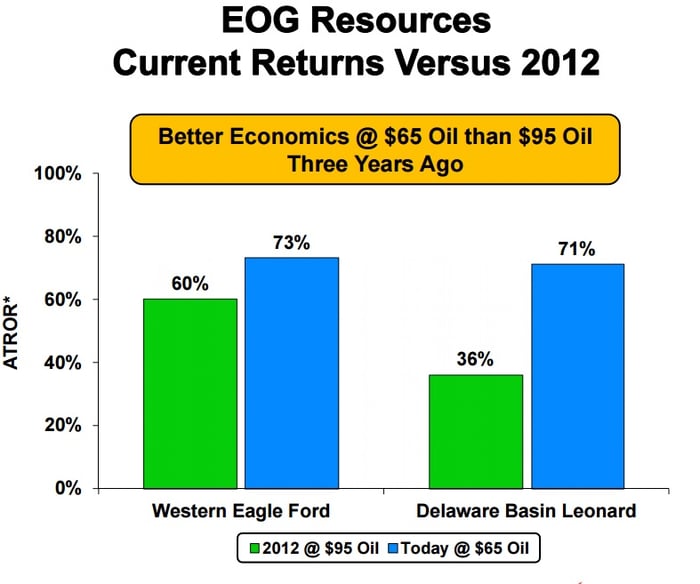 A large reason for this improved profitability is that EOG is aggressively taking advantage of the oil crash to extract significant operating savings from oil-service companies. In addition, the company's focus on reducing costs per well means that, should EOG restart drilling in 2015, its profitability should benefit nicely from per-well cost reductions (compared to 2014) of:

Pioneer has similarly lowered its drilling expenses -- 15% thus far this year compared to 2014 -- and expects further cost-cutting as it extracts further price concessions from suppliers.

Strong balance sheets and plenty of liquidity to fund new drilling
Massive debt loads have gotten many oil companies in trouble during the oil crash, but EOG and Pioneer have remained extremely disciplined in their borrowing. Thus, their balance sheets remain strong.

Not only does low leverage help safeguard these companies during an oil crash by creating a smaller interest burden and less risk of debt covenant breaches, but it also makes it more likely that they can obtain easy and cheap financing that can be used to restart drilling.

For example, EOG finished the quarter with a net cash balance of $2.1 billion and has an untapped $2 billion credit revolver, giving it a total liquidity position of $4.1 billion.

Pioneer, meanwhile, generated $104 million in net cash from operations in the first quarter despite obtaining an average oil price of only $43.02 -- a 53% decrease over last year's first-quarter average oil price.

Combined with its $1.5 billion in untapped credit facilities, Pioneer has a total liquidity position of almost $1.9 billion, more than enough to help fund its planned drilling expansion plans over the next year.

Bottom line: Early indicators of a recovery are real, but invest carefully
Whether or not oil prices have actually bottomed and are set to recover, oil investors must remain focused on investing in only the highest-quality oil stocks. That means those with low production costs, strong balance sheets, and plenty of liquidity to take advantage of recovering crude prices -- whenever that finally occurs -- with EOG Resources and Pioneer Natural Resources being two prime examples.

Adam Galas has no position in any stocks mentioned. The Motley Fool owns shares of Devon Energy and EOG Resources. We Fools may not all hold the same opinions, but we all believe that considering a diverse range of insights makes us better investors. The Motley Fool has a disclosure policy.