Let's do a basic SWOT analysis of Microsoft.

Shares of Microsoft (MSFT -0.31%) have slipped 3% since the beginning of the year, compared to a 7% gain for the NASDAQ. Many investors are probably wondering if the stock is becoming stagnant again, as it remained for most of the past decade. Let's dig deeper with a basic SWOT (strengths, weaknesses, opportunities, and threats) analysis to decide.

Strengths
Microsoft's main strengths are easy to see. Over 90% of PCs worldwide run various versions of Windows, while Microsoft Office remains the top productivity software suite in the world with 1.2 billion users. 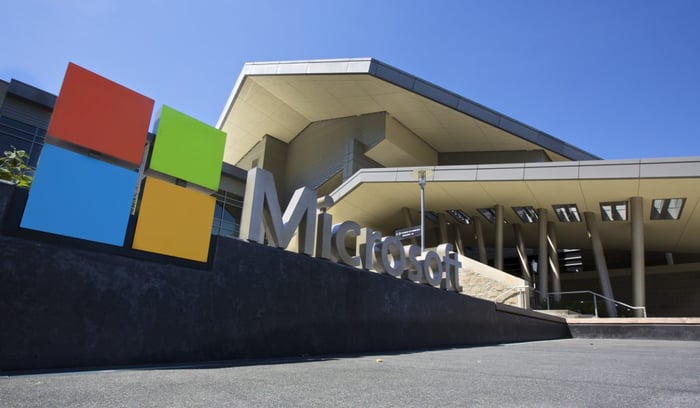 Those two pillars of growth will keep generating revenue as long as PCs remain relevant. That's why Microsoft's annual revenue soared from $36.8 billion in 2004 to $86.8 billion last year. During that period, annual earnings jumped from $0.75 to $2.63 per share. That robust growth enabled Microsoft to raise its dividends annually over the past decade.

Microsoft's dominance of operating systems and productivity software ties down a large base of enterprise customers, who can't reasonably move all their data to free alternatives like Linux or Google (GOOG -7.44%) (GOOGL -7.68%) Apps. Since many large businesses can't escape Microsoft's grasp but want more mobility, demand for two-in-one devices like the Surface to replace aging PCs has risen.

By comparison, global smartphone shipments are expected to rise 3.5% this year to 1.94 billion units -- more than six times the number of forecast PC shipments. Yet only 2.7% of smartphones worldwide run Windows Phone, according to IDC, compared to 78% for Google Android and 18.3% for Apple's iOS.

Meanwhile, Google is intruding into the PC market with Chrome OS, which runs on its Chromebooks. Chromebooks only accounted for about 1% of the PC market last year, but Gartner expects the budget devices to claim over 4% of the market by 2017. Since Chromebooks offer free productivity software and cross-compatibility with Android apps in a cheap hardware package, they could erode Microsoft's market share among students, young professionals, and small to medium-sized businesses.

Opportunities
In the past, Microsoft relied on periodic upgrades of Windows and Office to generate fresh revenue. But over time, users stuck with "good enough" versions instead of upgrading. Today, just 16% of PCs worldwide run Windows 8/8.1. A Forrester Research study in late 2013 found that 28% of surveyed companies were still using Office 2003.

To reduce that fragmentation, Microsoft is promoting its "One Windows" strategy. Windows 10, which will be offered as a free upgrade to most mainstream Windows 7 and Windows 8 users, could unify all those PCs, tablets, and smartphones under a common OS. The scalability of that OS could leverage Microsoft's strength in PCs to offset its weakness in mobile.

Over the past two years, Microsoft acquired companies like Parature (CRM software), Green Button (cloud computing), Aorato (machine learning), and Datazen (business intelligence and data visualization) to bolster its portfolio of cloud services. It will likely keep growing that business with additional acquisitions in the near future.

Threats
The biggest long-term threat to Microsoft is Google. Since Google relies on advertising revenue, it can constantly launch free alternatives to Microsoft's paid software. Chrome OS and Google Docs are less popular than Windows and Office, but their steady growth in the low-end market has already forced Microsoft to lower its prices.

Last year, Microsoft dropped Windows license fees for tablet and smartphone makers and slashed the price of Windows licenses for some laptop makers. However, that aggressive strategy caused Windows OEM Pro and non-Pro revenue to respectively decline 19% and 26% annually last quarter. Microsoft has also been handing out free one-year trials for Office 365 and OneDrive with new Windows tablets and laptops. This strategy is unsustainable in the long run, since Microsoft needs fresh software revenue to survive.

That threat also applies to its cloud services, where competition between Microsoft, IBM, Amazon, Google, and other companies is lowering price expectations. As a result, Microsoft's cloud-based revenue growth could become less meaningful to its bottom line.

The road ahead
Microsoft is a company in transition. In the near term, its bottom line will remain under pressure, but it's setting up the foundations for future growth. Windows 10 might reduce OS fragmentation and tether more users to its cloud ecosystem, and it could pave the way to future growth. Ultimately I'd like to see Microsoft widen its defensive moat against Google some more before I consider it to be a worthwhile long-term investment.

Microsoft Is a Buy: ChatGPT To Reignite Growth for the Company

Can Microsoft Win the Race to Dominate Artificial Intelligence?