Apple's (NASDAQ:AAPL) new music streaming service, Apple Music, is finally available for streaming as of Tuesday. This new business will not move the needle by much from a financial perspective, at least not in the first stages. However, there are strong reasons to believe a successful Apple Music could be a powerful driver for the stock over the middle term.

Pandora Media (NYSE:P) and Spotify are the two leading players in the music streaming industry, but they have different business models. Pandora is mostly based on free radio streaming monetized via advertising, while Spotity is all about premium subscriptions.

Based on financial reports for the first quarter of 2015, Pandora had 79.2 million active listeners, and the company accounted for 10% of U.S. radio share. Advertising produced 77% of total revenue in the last quarter, with the remaining 33% coming from subscription fees.

While subscriptions still represent a considerable share of revenue for Pandora, sales from this business are actually declining: Subscription revenue fell 18% year over year in the last quarter, while advertising revenue grew by a strong 27%.

Spotify, on the other hand, relies on subscriptions for most of its income. The company has 75 million active users, and 20 million of them pay Spotify $9.99 monthly for the premium service.

Apple Music looks like a more threatening competitor for Spotify than for Pandora. The service will cost $9.99 per month, just like Spotify's premium service, and it will offer a similarly sized library, with approximately 30 million tracks.

Importantly, Apple has access to 800 million active iTunes accounts, including credit card information for those users. If the company can persuade 10% of that base to subscribe to Apple Music, Apple would be as big as Pandora and Spotify in streaming. Spotify has turned almost 27% of its listeners into paying members, if Apple can achieve a similar conversion level over time, the company would have 216 million paying subscribers, becoming the undisputed industry leader by a wide margin.

From a financial point of view, the impact could be noteworthy, but hardly a game changer over the short term. Wall Street analysts on average forecast that Apple will make $231.9 billion in revenue during the current fiscal year; that means 80 million members paying $120 per year would represent 4% of current sales, while 216 million members would mean a more relevant 11% revenue.

The long-term view
It's not only about the current size of the pie. Streaming is the only segment of the music industry that is showing consistent growth, and everything suggests the trend will only get stronger over time. Apple revolutionized the music industry with the iPod, the iPhone, and its iTunes Store in the last decade; if the company wants to remain at the forefront of industry trends, it needs to make big inroads in streaming.

Based on data from the IFPI 2015 Digital Music Report, the music industry last year produced the same amount of revenue from digital channels as from physical product sales, but digital is rapidly gaining ground versus physical. In addition, digital music downloads are declining, so streaming is the main growth driver in the industry.

Total global digital music revenue increased 6.9% in 2014, but permanent downloads fell by 8%. Most of the growth came from streaming, with subscription streaming revenue growing 39% and ad-supported streaming increasing 38.6%. 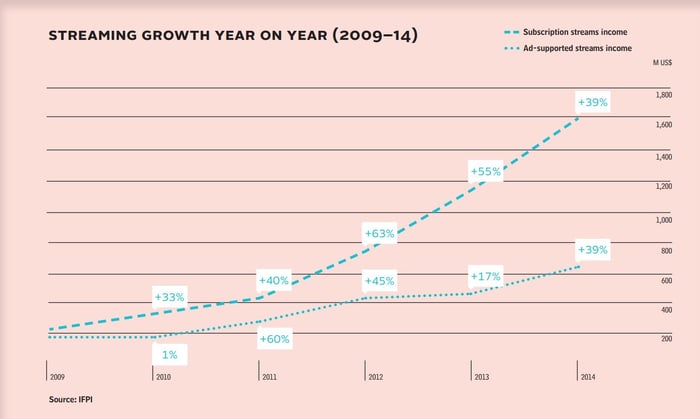 Young consumers and millennials are clearly a key demographic segment in the music business, and they are particularly inclined toward the flexibility provided by streaming subscriptions versus the traditional music ownership model. Besides, streaming offers valuable functionalities to explore and discover new music, which is a big plus for many music enthusiasts.

Just like digital downloads replaced physical on the last decade, everything seems to indicate that streaming is replacing downloads at a considerable speed. This means the market opportunity should grow over time, and Apple could be both a major driver and one of the main beneficiaries from new music consumption habits.

One of the biggest reasons for negativity surrounding Apple stock is that the company is too dependent on iPhone sales, as the product accounted for a gargantuan 69% of total revenue during the last quarter. If Apple can prove to investors that it can diversify its revenue base by bringing new products and services to the market, this would provide increased visibility on the company's ability to sustain growth over the long term.

Apple will need to reach considerable scale for Apple Music to become a relevant revenue generator, and this could take some time. But the market opportunity in streaming will most probably increase over time, and a successful launch would prove that Apple still has what it takes to innovate and capitalize on new opportunities. This could be music to investors' ears.

Apple Music Could Be a Major Win for Investors in Apple Inc. Stock @themotleyfool #stocks $AAPL $P Next Article
Current