While top global companies were hitting the brakes, Pfizer was hitting the gas. See why Pfizer's increased spending on advertising should pay dividends for investors. 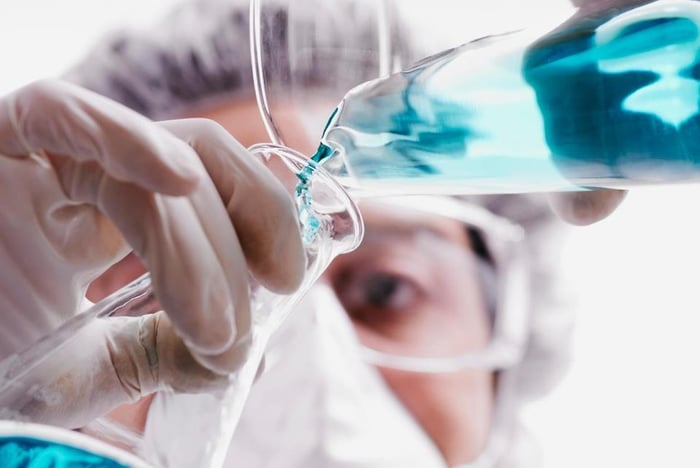 This decade hasn't been too kind to Big Pharma giant Pfizer ( PFE -5.14% ) despite what its stock price might show.

Since 2010, Pfizer's revenue has been on a precipitous decline as a result of an unprecedented number of patent expirations. None has hurt more than the loss of cholesterol-fighting drug Lipitor. Although Lipitor is still going strong in foreign markets such as China, its roughly $2 billion in annual sales today pales in comparison to the nearly $13 billion it brought in per year in its prime. Other major losses for Pfizer have included Detrol, Spiriva in select markets, and most recently arthritis treatment Celebrex.

In Pfizer's most recent quarter it forecast $44 billion to $46 billion in sales for full-year 2015. By comparison, Pfizer generated close to $68 billion in sales in 2010. A stronger dollar is partly to blame, with an expected negative revenue impact of $3.3 billion in 2015 from foreign currency translations alone. However, the bulk of Pfizer's sales slide is due to the introduction of generic competition to its core products.

Trimming the fat and paying its shareholders
In response, Pfizer has done what any Big Pharma company would be expected to do when coping with the loss of a key revenue source: cut expenses and boost shareholder yield.

Pfizer has also been making a strong effort to return money to investors as sort of a "thank you" for being patient as it attempts to reignite its growth engine. In connection with mostly falling expenses, Pfizer has beefed up its share buybacks and its dividend. From 2011 to 2014, Pfizer returned close to $65 billion to investors via buybacks and dividends. In just the first quarter of 2015, Pfizer met its share buyback obligation for the year at $6 billion, and it's on pace to pay shareholders a cumulative $7.2 billion in dividends in 2015. Together, tight expensing and high shareholder yield have helped buoy its stock price.

Pfizer gets aggressive
However, Pfizer is also making a very smart move that allows it to stand out from the crowd, but which almost seems counterintuitive amid its cost-cutting.

Why boost ad spending? Simple: Branded drugs have a finite patent life, so Pfizer understands that it must promote its potentially highest-margin blockbusters while they're still free of generic competition.

With generic competition on the horizon by 2018 (or sooner) for Lyrica, and Viagra facing a growing and competitive landscape, it makes sense for Pfizer to milk these high-margin pharmaceutical products for everything they're worth in the coming years. As for Eliquis, it has a real shot at displacing warfarin and becoming the oral anticoagulant standard of care. Improving awareness with the public and primary care physicians is what Pfizer and development partner Bristol-Myers Squibb are focused on in the Eliquis ad campaign.

Putting things into perspective
While Pfizer's ad spending makes it stand out from the crowd, and its prospects of generating significant cash flow from best-selling drug Lyrica for another three-and-a-half years looks promising, the company still has far to go to return to where it was in 2010. Ibrance is the product to which Pfizer has pegged its growth potential throughout the remainder of the decade after the drug practically doubled progression-free survival in the PALOMA-1 study in patients who had not yet received an endocrine-based therapy. Pfizer's plans to deliver results in roughly a half-dozen additional studies over the next five years. If Pfizer plays its cards right and Ibrance performs in clinical studies, this could easily be a $3 billion-plus per year drug.

Pfizer still faces a number of challenges, including ongoing losses of exclusivity on key drugs, and determining what, if anything, it will eventually do with its global established products portfolio. Even with Ibrance it could be tough for Pfizer's top line to end its slide before 2017 or 2018. For the company's investors, that's not particularly encouraging after the stock has already run up 125% over the last five years.

My suggestion is not to rush into buying Pfizer's stock. It will take some time before Pfizer's long-term prospects are adequately reflected in its share price. Although it appears to be a solid longer-term investment, I suspect there are probably better places within the healthcare sector to park your money for the next couple years (or beyond).

Why Aeglea BioTherapeutics Stock Is Way Down Today