Costco's (NASDAQ:COST) stock won't show up on a screen for high dividends. The warehouse retailer promised investors just $1.60 per share this year, for a measly 1.2% yield.

You could get double that income rate from other big retailers such as Wal-Mart, Target, and Home Depot. 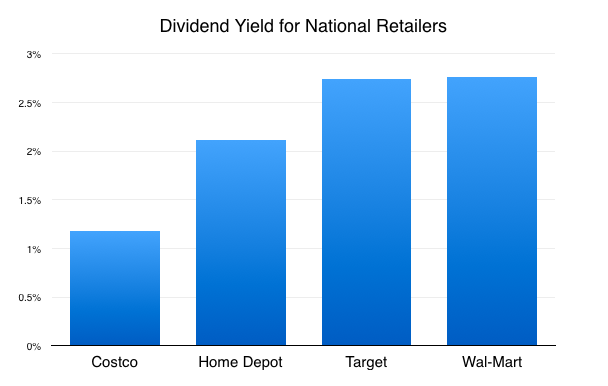 However, it's misleading to focus only on forward payout yields here. After all, Costco has sent two massive "special" dividends to investors in the last three years -- on top of its regular stated payment. Including the extra $5 per share in 2015 and $7 per share in 2012 gives us an actual dividend yield of closer to a whopping 5%.

Income investors can't predict when management will issue another special payout. In fact, we can't bank on those ever happening again. The company's chief financial officer told investors as much in late May. "We have two data points for special dividends -- two points does not a trend make. But it worked pretty well and we will see what the future brings, " he said in a conference call.

Still, Costco's official quarterly dividend has plenty of room to grow from here.

Low payout ratio
The $0.40-per-share quarterly dividend equates to $700 million that Costco has promised to pay from its coffers this year. That's only one-third of the $2.1 billion it posted in net income in 2014, for a relatively scant 33% payout ratio. Wal-Mart and Home Depot pay closer to 50% of their earnings out in dividends. And Costco arguably has room to boost its payout ratio even higher than that.

Most of its profit comes from membership fees rather than sales markups. Those fees are steadier and more predictable than traditional retail profits (over 90% of members renew their subscriptions every year). So there's no reason why Costco's rock-solid profit profile couldn't eventually support a higher payout ratio than other retailers provide.

Management's dividend raises seem to track this figure closely. Cash flow has more than doubled since 2009. And so has the quarterly dividend, which improved from $0.20 per share to $0.40 per share over that time. The 2015 dividend raise was 14%.

Meanwhile, Costco has $5 billion of cash on its books right now as long-term debt sits at a manageable $4.8 billion. 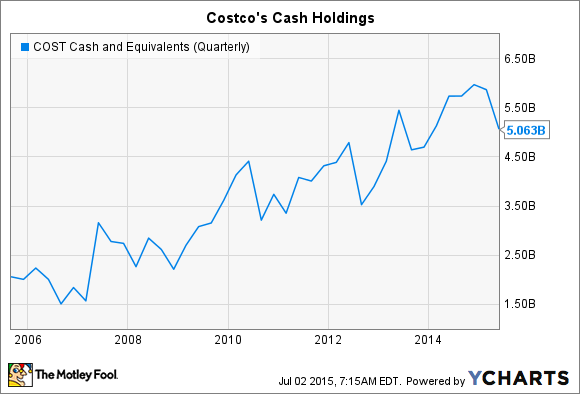 Expansion commitments
But the biggest competition for dividend cash is Costco's spending on land, buildings, and leases for new warehouses. Considering how much profit the retailer squeezes from each location, it makes sense that management prioritizes these investments before sending excess cash back to shareholders.

And these mammoth 150,000-square-foot stores are expensive to open. Costco spent $2 billion on new warehouses last year. Management plans to invest as much as $2.7 billion on capital investments in fiscal 2015.

But Costco's overall expansion plans are modest. It opens around 30 new warehouses per year, representing less than 5% growth on its store footprint. With sales at existing locations spiking higher by 7% over the last three quarters, Costco's bigger opportunity seems to be increasing traffic at the stores it already has, rather than aggressively expanding its store base.

Feeling special
Costco's relatively low payout ratio suggests that management is perhaps too cautious about promising bigger cash payments to shareholders. Sure, in practice Costco's dividend payment has led the industry over the last few years. But shareholders can't bank on those lumpy cash distributions. Costco can easily afford a bigger, more concrete dividend commitment to its investors.