Electric-car maker Tesla Motors' (NASDAQ:TSLA) stock popped as much as 4% this morning after the company reported higher-than-expected quarterly sales of its pricey sedan. Tesla delivered 11,507 Model S during Q2, a new quarterly record for the company. Up 52% from deliveries in the year-ago quarter, the deliveries were well above its guidance range for 10,000 to 11,000 vehicles.

On target for a big year
Going into the fiscal year, Tesla predicted that sales of its pricey sedan would leap 50% in 2015 -- even after 2014 deliveries rose 41%. So far, the company is ahead of schedule. Tesla's Q2 deliveries put deliveries for the first half of the year up 54% from total deliveries in Q1 and Q2 of 2014. 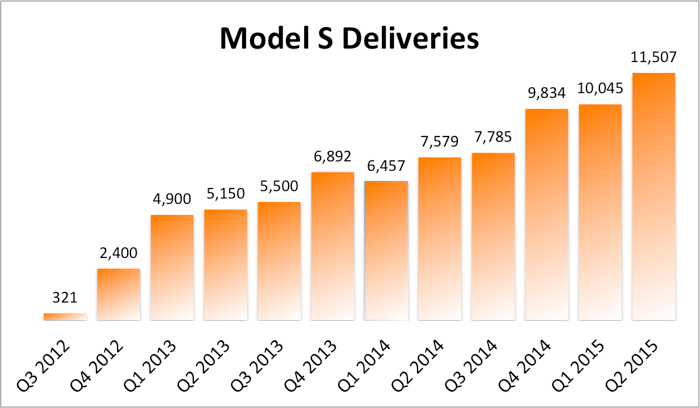 Sure, 11,500 quarterly deliveries is nothing compared to the millions of vehicles bigger auto companies like General Motors and Ford sell, but it's still impressive when you consider this figure represents a single vehicle with a $75,000 starting price. Indeed, in Q1, Model S already held the top spot for market share in North America in the high-end premium sedan segment, even outselling Mercedes-Benz's lauded S Class. And with quarterly deliveries up about 1,500 from Q1, it's likely Tesla has extended this lead.

Also worth noting, Tesla's year-to-date deliveries put the company on track to achieve its full-year guidance for total deliveries, including both its Model S and its soon-to-be released Model X, a premium, fully electric SUV. Tesla predicted in its fourth quarter letter to shareholders it would deliver 55,000 Model S and Model X vehicles, representing 74% growth from total 2014 deliveries of Tesla vehicles. "About 40%" of these deliveries, Tesla forecast, would be delivered during the first half of the year. And now, with the first half of the year already passed, Tesla's total 2015 deliveries represent 39.2% of the car-maker's guidance for 55,000. 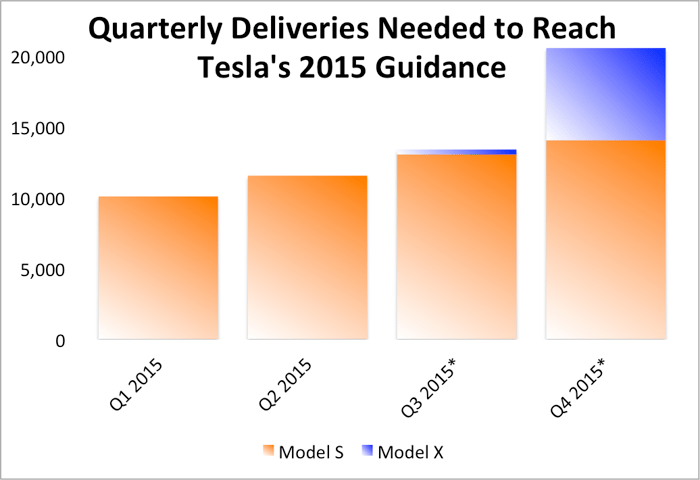 Piecing together comments from Tesla management, the company expects 2015 vehicle deliveries to look something like this. Chart source: Author.

Model X could make or break the second half of 2015
For Tesla to achieve 70%-plus sales growth in 2015, the company appears heavily dependent on a successful Model X launch. Tesla management said in its third-quarter letter to shareholders in 2014 it planned to ship 50,000 Model S in 2015. Assuming this vehicle-specific guidance was unchanged when Tesla said in its fourth-quarter letter to shareholders that it planned to sell 55,000 total vehicles this year, Tesla is betting it can deliver 5,000 Model X by year-end.

In the last update from management on Model X, Tesla CEO Elon Musk said the first Model X deliveries would begin in late Q3. Investors are counting on Tesla to deliver the vehicle on time in order for the company to hit its ambitious target for 55,000 vehicle deliveries in 2015. Achieving such significant sales growth this year would be difficult without an on-schedule Model X launch.

Demand for Model X in the near term shouldn't be a problem, Tesla already has over 20,000 deposit-backed orders for the SUV.

Tesla's continued execution on ramping up production and deliveries at faster rates than year-over-year delivery growth rates achieved in 2014 is a strong testament to the company's ability to meet its ambitious goals.