If you've followed a company for years and read through several quarterly reports, you surely noticed multiple representations of the same data. For example, General Motors (NYSE:GM) presents its net income earnings per share, and it also presents EBIT-adjusted earnings per share, which excludes special items and -- it believes -- more accurately reflects its ongoing business. It's important for investors to fully understand what special items are and how the charges impact a company's financials.

Let's take a deep dive into what a special item is, what it isn't, and how General Motors' $600 million charge, stemming from changes in its valuation of the Venezuelan bolivar, will impact its second-quarter earnings per share, free cash flow, and automotive liquidity.

What it is, and isn't
A special item is an event or transaction that isn't considered a normal part of the operating cycle of ongoing operations. Here's a list of special item examples -- which isn't all-inclusive, for the record. 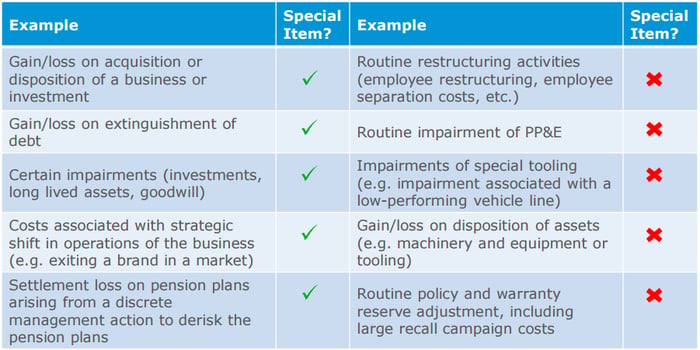 So, what's behind GM's $600 million charge, how does it fit in as a special item, and how much will it impact EPS?

Currency problems
Worsening conditions in General Motors' South America business will cause the automaker to adjust its exchange rate on the Venezuelan bolivar. GM will now use a value of 200 bolivars to one U.S. dollar, which was drastically different than the previous 12 to 1 rate.

That change in currency valuation will force General Motors to take the previously mentioned $600 million special item charge in the second quarter of 2015, which will negatively impact its net income earnings per share but not its operating results (GM's EBIT-adjusted metric).

Here's a look at how it breaks down using an example from GM's first-quarter of 2014, which also included a $400 million charge associated with the Venezuelan bolivar.

When GM reports its second quarter, investors should expect its net income EPS to be negatively affected by the $600 charge, but GM also reports its EBIT-adjusted earnings, which will back out the impact of that charge, similar to the example above. But, how much will the charge reduce net income earnings per share?

Using GM's fully diluted share count from the first quarter of 2015, the charge will impact net income earnings per share by about $(0.35).

Further, now that you better understand how the $600 million charge is treated as a special item, and how large of an impact it will have on net income earnings per share, let's take a look at how the charge will impact GM's free cash flow.

Tom Timko of General Motors said on a conference call that he doesn't believe the $600 million charge in the second quarter will affect GM's 2015 free cash flows. He's right, but that's because free cash flow is merely defined as operating cash flow minus capital expenditures. Let's look back at GM's automotive cash flow from operating activities for 2014.

Taking that $10.1 billion automotive cash flow from operating activities and subtracting capital expenditures will leave you with this -- with no adjustments needed for special items:

However, that doesn't mean the $600 million charge in this year's second quarter will simply vanish, of course. Investors can dig into GM's SEC filings and find the change in automotive liquidity, which will point out what happens with GM's automotive cash flow after capital expenditures are accounted for.

It should be noted that the effect of foreign currency for GM in 2015 will include more than just its $600 million charge for the Venezuelan bolivar. Here's a look at GM's change in automotive liquidity from 2013 to 2014:

Let me preface this by saying that General Motors isn't doing anything wrong or misleading by saying its free cash flows will remain unaffected; this is just to explain to investors how exactly special items impact earnings per share, EBIT-adjusted figures, cash flows, and overall automotive liquidity.

Ultimately, despite ongoing special items continually dinging General Motors' net income EPS figures, the automaker's EBIT-adjusted metrics give you a better reflection of its improving underlying business. Further, the automaker is sitting on an extremely large cash pile: As of the first quarter of 2015, GM had $13.7 billion of cash and cash equivalents and an additional $8.4 billion in marketable securities. It also has $12.1 billion available under credit facilities, which means GM has a total automotive liquidity reaching a staggering $34.2 billion.

Despite the annoyance of these special item charges that continue to dent General Motors' net income available to shareholders, Detroit's largest automaker can easily afford the hiccups that come with declining business in certain regions, such as this $600 million charge. At least now you have the knowledge to better understand the next charge that inevitably comes down the road and what impact it has on a business.