The Parisian in Macau will add more hotel rooms and gaming tables to the market. Source: Las Vegas Sands.

Gaming revenue continues to plunge in Macau, and even bullish analysts (like myself) have to be questioning when the bottom will come. Signs that revenue had stabilized between February and May seemed to be crushed by a 36.2% decline in Macau's gaming revenue in June to $2.2 billion, the worst for a single month in over four years.

Strangely enough, gaming stocks are up on the seemingly negative news. Investors seem to be looking beyond June to green shoots in Macau, whether they exist or not.

A new low for Macau
You can see below that the drop in gaming revenue didn't subside in June -- it actually accelerated. 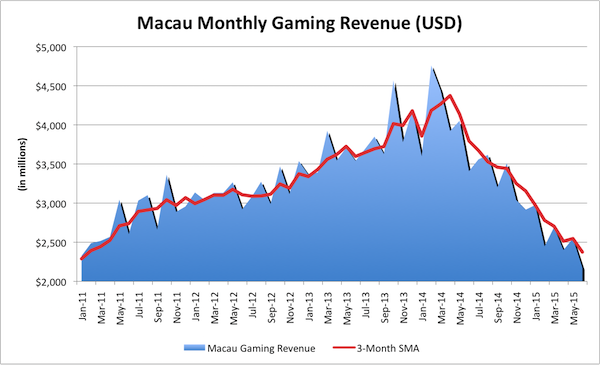 What's amazing is that even as this news was coming out, gaming stocks were shooting higher. Over the past week (ending Thursday) Melco Crown (NASDAQ:MLCO) is up 6.4%, Wynn Resorts (NASDAQ:WYNN) is up 4.9%, and Las Vegas Sands (NYSE:LVS) is up 4.3%. All three companies get most of their revenue from Macau and their profits were hit hard over the past few quarters by declining gaming revenue. That trend doesn't look to be slowing in Q2.

The reason for the market's excitement short-term may be speculation that Chinese visitors will come to Macau more and stay longer in the future.

Visas to Macau may be easier to get
One challenge Macau's gaming industry always has to deal with is an ebb and flow when it comes to Mainland China's visa restrictions. Those are relaxing slightly as China is now allowing people to stay in Macau for seven days, up from a previous restriction of five. For Las Vegas Sands and Melco Crown, which cater more to mass market players on the Cotai Strip, longer stays would be good news.

But this is an incremental positive and it's probably not going to move the gaming needle much in Macau. Gamblers usually come for a day or two at a time, and it's unlikely that many were hitting the five-day limit.

Worse yet, there could be more downside to come in the VIP space.

Yes, Chinese gamblers still smoke
What could overwhelm the increase in traffic to the casinos from expanded visas is a full ban on smoking in the casinos, which is expected to pass in coming weeks. Analysts at Deutsche Bank predict that a smoking ban could result in a 10% to 15% decline in VIP gaming revenue, as if that market hasn't been hurt enough.

It's amazing that smoking could be such a big driver of gambling in Macau, but it's a hot topic of conversation. Wynn Resorts, who has traditionally catered to VIPs, could take a big hit from a smoking ban at Wynn and Encore Macau. But Steve Wynn has repeatedly said that outdoor balconies at VIP rooms in Wynn Palace on Cotai will be a differentiator for his company, allowing VIPs to smoke.

Who would have thought smoking would be so important to a multibillion-dollar industry but Chinese gamblers are a fickle group and casinos that can indulge this vice could benefit. At least Wynn Resorts hopes that's the case.

Bad timing for gaming giants
All of this news is against the backdrop of a huge expansion in Macau's number of gaming resorts. All six concessionaires are building, or have recently opened, new properties on Cotai, and over the next three years, there will be a steady increase in supply of hotel rooms, gaming tables, and entertainment attractions. Las Vegas Sands' CEO Sheldon Adelson thinks that will attract more visitors long-term but that's a thesis that will take time to play out, if it does at all.

To make matters worse, gaming is expanding across Asia. Melco Crown recently opened a resort in The Philippines and Las Vegas Sands' Marina Bay Sands in Singapore is a huge draw as well, among many other new gaming resorts. The decline in Macau gaming revenue is just bad timing for casino operators and if it doesn't recover these new resorts will lead to increased competition and lower profits across the board for gaming operators.

I'm bullish over the next 3-5 years, but these stocks can be volatile and investors need to buy and hold rather than watching weekly or monthly gaming reports out of Macau. They won't be pretty in the near term, and that might be bad news for Macau's gaming stocks until the trend turns around, whenever that may happen.