Molycorp dug itself into such a deep hole that was just too difficult to climb out of. Photo: Molycorp.

As it turns out, rare-earth minerals aren't all that rare, and a miner imploding after failing to exploit that ephemeral scarcity shouldn't surprise anyone. The real question after Molycorp's bankruptcy filing last week might be how did it survive so long?

A monopoly too good to not exploit
Rare-earths are 17 minerals that make up a strategic resource used in everything from powerful magnets and electric motors for hybrid cars to smartphones and defense weapons systems. China owns around 30% of global rare-earth deposits, accounts for more than 90% of their production, and for 70% of the world's rare-earth consumption. In 2009, supposedly as a means of controlling illegal mining and the resulting pollution, China imposed export quotas on the minerals resulting in their price surging by as much as 2,400% in some cases and causing the U.S., Europe, and Japan to rethink their own aversion to mining them. Even though previous attempts found the effort uneconomical, this was the signal to revisit that decision.

As the only U.S. miner of rare-earths and the leading non-Chinese global producer, Molycorp was one of the early miners that sought to capture this new-found interest in the minerals by going public in 2010 and touting its Mountain Pass, California mine as a secure domestic supply.

Like the prices of rare-earth minerals themselves, Molycorp's stock shot higher out of the gate, going from its $14 per share offering price all the way up to $79 a stub over the next year. But the bottom soon fell out of the market as it became clear the world's rare-earths supply wasn't going anywhere, and before long Molycorp was trading for pennies on the dollar. 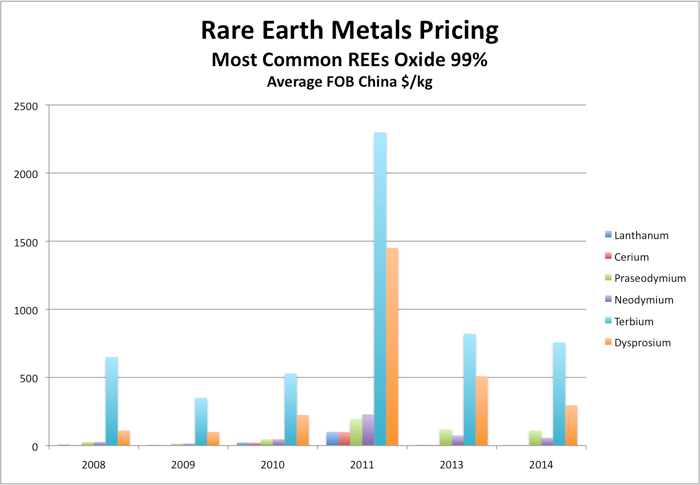 Molycorp's stock had a similar trajectory as the prices of the metals it was mining. Data: Molycorp annual SEC filings.

All hat, no cattle
Molycorp's problem was its Mountain Pass mine wasn't rich in the rare-earths that mattered. Where terbium and dysprosium are among the most valuable rare-earths and still enjoy relatively high prices compared to their pre-2009 prices, Molycorp was instead flush with some of the cheapest minerals, cerium and lanthanum, that even today are priced at a discount.

That could be a problem for other rare-earths miners like Australia's Lynas, which continues to struggle to turn a profit and caused its auditor to warn of "the existence of a material uncertainty" that "cast significant doubt about (Lynas') ability to continue as a going concern."

Molycorp's filing shows investors shouldn't take those concerns with a grain of salt.

Burning the furniture to keep warm
In a bit of high-stakes maneuvering by its creditors, Molycorp has agreed to sell its minerals processing business Neo Materials Technologies. Some of its creditors believe that will completely cripple the miner altogether.

Molycorp purchased Neo Materials (now known as Molycorp Minerals Canada) in 2012 with the idea that it would vertically integrate the miner and give it a gateway to Asian markets because it processes rare-earths in China and Thailand. But the acquisition also raised Molycorp's costs because it has to ship the minerals it mines in California abroad for processing, and worse, some of Neo's most important patents expired at the end of last year.

The complicated financing agreement wrangled with Oaktree Capital Group after filing for bankruptcy will seed Molycorp with $126 million right away to get it through the process, but requires it to sell Neo Materials, a move the miner's other bondholders believe is an attempt by Oaktree to take over that business.

Molycorp is also said to be considering idling the Mountain Pass mine, which continues to lose money while it operates.

Ruled by emotion
Regardless of the behind the scenes machinations to keep Molycorp afloat, the rise, fall, and bankruptcy of the rare-earths miner is a cautionary tale for investors about getting caught up in the moment and letting emotion guide investing decisions rather than looking at the merits of the business.

Molycorp piled up a mountain of debt that collapsed under the weight of an unsustainable market because rare-earths are really rather plentiful and there are cheaper substitutes to many of them that are now being used in many applications.

A domestic supplier of these strategic elements may be essential for our economy, but not at any price, and for investors Molycorp always was a stock much too risky to place a bet on.