Kulicke & Soffa has a dominant market share in the wire bonder business, and its cash-rich balance sheet makes the stock cheaper than it appears.

The process of manufacturing an integrated circuit is extremely complex, comprised of dozens of steps and requiring a wide variety of specialized equipment. In 2014, the market for semiconductor equipment grew to $38 billion, and Gartner expects this number to reach $47 billion by 2018.

The most common way to create these connections is wire bonding, where a very thin wire made of either gold or copper connects the integrated circuit and its package. Kulicke & Soffa currently enjoys a dominant share of the automatic wire bonder market, about 70% as of the end of 2012, up from about 30% in 2008. Ball bonding, a type of wire bonding, is its core business.

Advanced packaging technologies offer an alternative to wire bonding, and in that area, Kulicke & Soffa has a far smaller market share. Earlier this year, the company announced that it was acquiring Assembleon, which focuses on advanced packaging techniques, expanding Kulicke & Soffa's served available market by nearly 60%, according to the company. 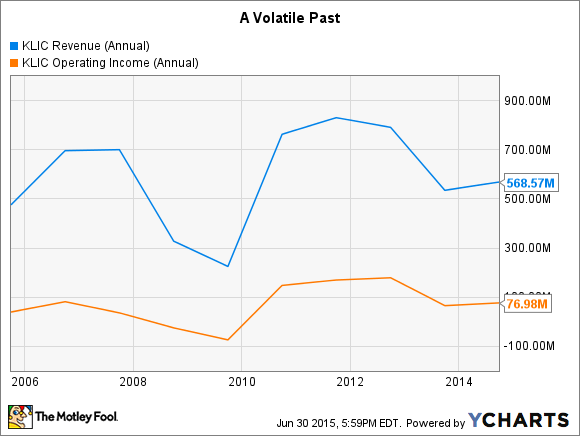 The company was hit particularly hard by the recession, with revenue falling dramatically in 2008 and 2009. Revenue tripled in 2010, remained elevated for three years, and then fell by nearly a third in 2013. Clearly, investing in the semiconductor equipment business is not for the faint of heart.

One positive trend, though, has been its gross margin: 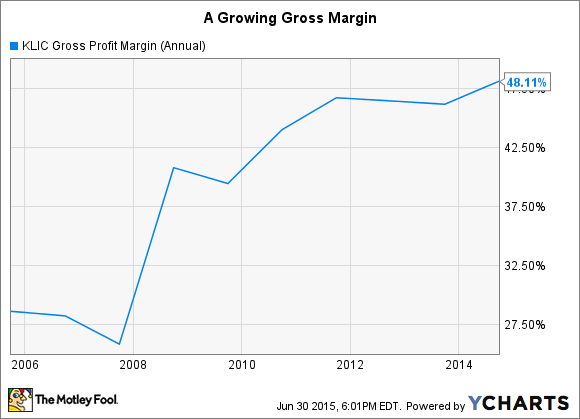 As Kulicke & Soffa started to gain significant market share in 2008, its gross margin jumped, and it has stayed in the mid-to-high 40% range for the past five years, despite the fluctuations of revenue. The decrease in competition over the years has been good for the company's bottom line, and its ability to maintain its gross margins is a good sign that the company has built a defensible market position.

A bargain stock
How do you value a company like Kulicke & Soffa? It is best not to base your valuation on a single year, since the results can vary so widely. This is true for any cyclical company, and investors can get into a lot of trouble by assuming that the results of a few good years will last forever.

The company recorded an average annual operating profit of $56 million over the past decade, good for an annual net income of about $45 million based on the 2014 tax rate. This may be overly conservative, though, since the company has vastly increased its market share since 2008. If we average over the past five years instead, which excludes the worst years of the financial crisis, the average net income is a much higher $105 million.

Kulicke & Soffa's market capitalization is currently about $900 million, putting the price-to-earnings ratio, based on these averages, anywhere between nine and 20 times. That is not all that helpful, but it turns out that the company's stellar balance sheet makes the difference between these numbers less important. The company has no debt, and at the end of the most recent quarter, after paying for the Assembleon acquisition, there is $529 million of cash on the balance sheet.

Kulicke & Soffa has been piling up cash for years, and it has been extremely reluctant to use it. A $100 million share buyback program was announced late last year, but the company spent just $11 million on buybacks during the most recent quarter. There has also been no indication that a dividend will be started, despite the fact that the company can easily afford it.

What this cash does is skew the price-to-earnings ratio. The market is valuing all of Kulicke & Soffa's future earnings at just about $370 million, putting the cash-adjusted price-to-earnings ratio, again based on those averages, between 3.5 and 8.2 times. Either one of these numbers makes the stock look cheap.

The risks
Like any investment, Kulicke & Soffa does not come without risks. I see two major things that could go wrong. First, the market for advanced packaging equipment could evolve differently than what the company expects. Wire bonding may be replaced at a faster rate, and the company may not be able to win market share quickly enough. However, given that wire bonding is typically the low-cost solution, and that Kulicke & Soffa has been in this business for 60 years, the company getting caught completely off guard seems unlikely.

The bigger risk has to do with that massive pile of cash. Without that cash, the stock would not be nearly as attractive, and there is always the potential that the company uses it in an unfortunate way. Given its history of being extremely stingy with its cash, this also does not seem like a very big risk, though. Assembleon was bought for less than one-time sales and less than 10 times EBITDA, and it will be accretive to earnings in the first year. Kulicke & Soffa does not have a history of pursuing overpriced acquisitions.

Even with these risks, Kulicke & Soffa looks like an under-appreciated value play in the semiconductor equipment market. A single-digit cash-adjusted price-to-earnings ratio, based on average earnings, along with a rock solid balance sheet and a dominant market share in its core business, makes Kulicke & Soffa a bargain for anyone able to stomach the volatile results.

This Is the Cheapest Stock in My Portfolio