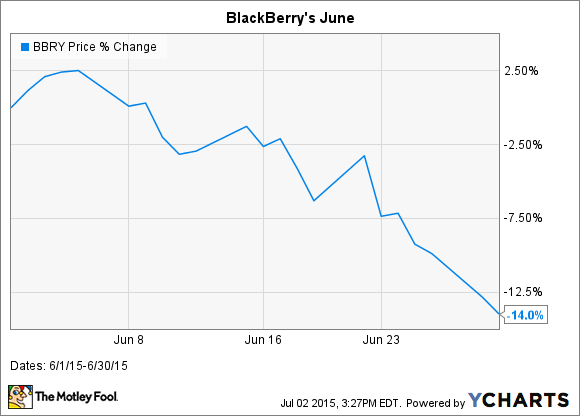 What: Shares of smartphone manufacturer BlackBerry (NYSE:BB) fell 14% in June, according to S&P Capital IQ data, as concerns about the Canadian company's path forward remained in doubt amid another disappointing quarterly earnings report. But while Wall Street seemed unsure about BlackBerry's path forward, CEO John Chen seemed decidedly more sanguine about its prospects.

However, in a curious move, Chen was positive about the quarterly results, even remarking, "I'm obviously pleased with the quarter," and noting that, "we had some very good achievements." That's probably because Chen has been concentrating on transitioning BlackBerry from a smartphone-focused company to a software-focused one.

Now What: Specifically, Chen was happy about the tremendous growth in its software and technology licensing division that reported year-on-year revenue growth of 154%. Chen also noted a new long-term patent licensing deal with Cisco that should continue to bolster that segment. Chen's always been known as a software guy and a turnaround specialist from his time at Sybase, and it appears that's how he's transitioning the company.

More recently, however, it seems like the company isn't fully getting out of the hardware business, and even appears to be bringing an Android-based smartphone model to market in some form. However, from Chen's demeanor and the continued corporate restructuring, it appears the company is in the midst of a transition from a large-footprint device manufacturer to a lean software company.

Will Chen be able to pull it off and lead a turnaround like he did at Sybase? Who knows; but if the market's reaction during June is any indication, more investors are thinking that it's less likely.