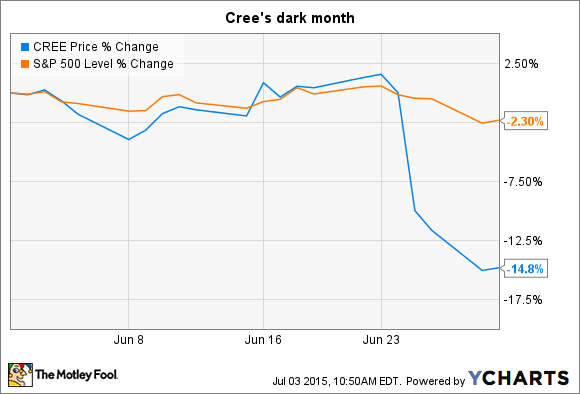 What: Shares of LED lighting specialist Cree (WOLF 5.70%) fell a blood-curdling 14% in June, according to S&P Capital IQ data. The plunge was triggered near the end of the month, when Cree announced a drastic restructuring. Neither analysts nor investors took that announcement as good news.

So what: The problem with this restructuring can be found at the very top of Cree's announcement. In short, it was a panic move:

"Due to recent LED market trends that have resulted in higher LED average selling price erosion than previously forecast and the continued under-utilization of Cree's LED factory, the company has decided to restructure the LED Products business to reduce excess capacity and overhead to improve the cost structure moving forward," the press release said.

Cree's core markets are suffering from dramatic price reductions, to the point that the company had to cut back its manufacturing operations. That's never good news. Moreover, Cree is holding back some of the small output stream in the hopes of selling it later when LED prices bounce back.

Now what: That hoped-for pricing rebound may never happen. LED lighting is turning mainstream in a big way. While this is great for unit sales volumes, commodity pricing is a new reality for this market.

Cree's operating cost savings will help in the short term, but this isn't a quick and dirty price war. These low prices seem likely to stick around for the long haul, eventually forcing Cree to dump its boosted product reserves at even lower price points.

So I applaud Cree's management taking swift action in the face of difficult market conditions, but at least some of these reactions look incorrect.

In other words, this isn't the kind of price drop that inspires me to buy Cree shares. Instead, I'm left scratching my head and wondering what's wrong with the company's management. I'll stay on the sidelines until Cree can prove that it has a sustainable long-term business model. Right now, that doesn't seem to be the case.

Anders Bylund has no position in any stocks mentioned. The Motley Fool has no position in any of the stocks mentioned. Try any of our Foolish newsletter services free for 30 days. We Fools may not all hold the same opinions, but we all believe that considering a diverse range of insights makes us better investors. The Motley Fool has a disclosure policy.