Novavax shares find their stride in June due to increasing global fears regarding a specific infectious disease. Can Novavax shares head even higher? 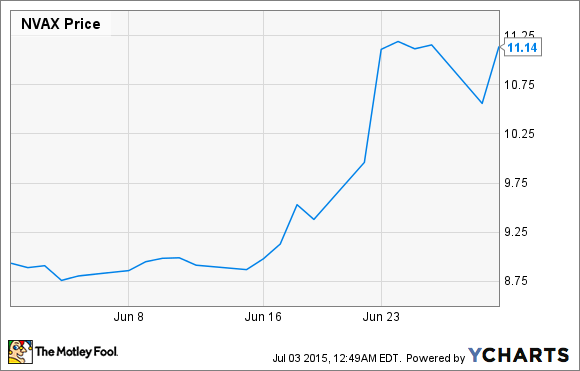 What: Shares of Novavax (NVAX 2.80%), a clinical-stage biopharmaceutical company focused on the development of vaccines to treat a variety of infectious diseases, surged by 24% in June, based on data from S&P Capital IQ, due to infectious disease concerns in overseas markets.

So what: Though it's difficult to trace Novavax's share price increase in June to just a single event, the fact that it's in the process of doing research into Middle East Respiratory Syndrome, or MERS, a disease currently without a cure, appears to be enough to boost shareholder interest in the stock for the time being.

In South Korea (as of July 1, 2015), 184 people have been diagnosed with MERS, included 33 that passed away and 102 that were cured of the disease. Outside of Saudi Arabia, where MERS is believed to have originated, South Korea represents the largest outbreak. Much like we saw biopharmaceutical companies being rewarded last year for researching Ebola (which Novavax is doing, too), Novavax is likely getting a nice boost from its ongoing research into MERS.

Additionally, in a recent company presentation Novavax's management team announced that four of its clinical trials should be yielding data in the third quarter. These include its seasonal quadrivalent flu vaccine, its respiratory syncytial virus vaccine for the elderly, its maternal RSV vaccine for the protection of infants, and its Ebola vaccine. Investors like catalysts, and Novavax is giving Wall Street a big helping in Q3. Now what: The $64,000 question that investors need to ask here is whether or not Novavax's momentum can continue beyond just June. As is common with clinical-stage biotech stocks, that's not an easy question to answer.

In one corner, Novavax's vaccine development platform is fairly diverse -- RSV, influenza, and a handful of global diseases -- and it's primed to deliver a number of near-term catalysts. Although we're only looking at midstage data coming up in Q3, this could be the first glimpse investors and Wall Street get at the underlying efficacy of Novavax's RSV and influenza products. Novavax has a lot riding on the success of these platforms in Q3 as it could help validate the company's drug development platform.

In the other corner, investors have to keep in mind that Novavax is still a long ways off from an FDA approval and producing recurring revenue. As such, the losses for Novavax are likely to continue for at least the next couple of years. Beyond that, it's important to keep in mind that vaccines tend to be very hit and miss overall. Vaccine developers require governments around the globe to stock up, and there are no guarantees that demand will be strong enough over the long run to offset the high costs of vaccine development.

Overall, I consider Novavax watchlist-worthy, but it's not a company that I believe is primed for investors' dollars as of yet. Perhaps my tune will change following the third quarter, but it's difficult to get too excited about Novavax when we have only preclinical and phase 1 data to aid in our decision-making process.