What: PriceSmart's (NASDAQ:PSMT) stock rose by 12% in June, according to S&P Capital IQ data. The increase pushed shares into positive territory for the year: PriceSmart is now up 1% so far in 2015 and 2% over the past 52 weeks. 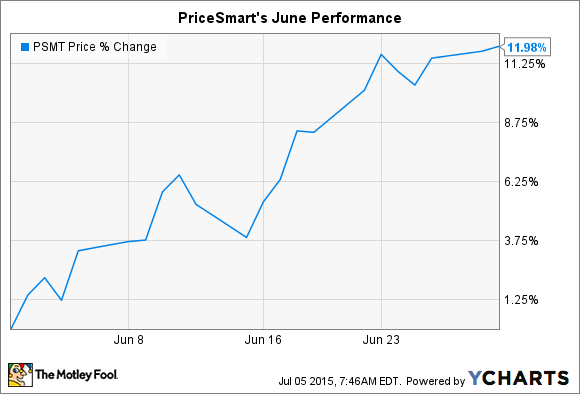 So what: The Costco-type wholesale retailer, which operates 36 warehouses throughout Latin America and the Caribbean, announced in early June that net sales increased by a hefty 14% in May. That boost was driven by three additional warehouses in its store footprint (all located in Colombia) as compared to the prior year. But PriceSmart also enjoyed a 4.6% sales gain at existing shops. May's comps were a solid improvement over April's 0.2% figure, and over the 2.4% comps it posted for the full second quarter.

Overall, Wall Street sees PriceSmart booking 12% higher sales for its fiscal third quarter, when it announces earnings results on July 9. Revenue will probably rise to $688 million, compared with $615 million in the year-ago period.

Now what: Investors shouldn't expect that sales gain to power much in the way of higher profits, though. In fact, analysts see PriceSmart logging $0.72 per share in earnings, just 3% above last year's haul. The earnings target is down substantially from the $0.82 per share Wall Street was targeting just 90 days ago.

Results will probably be pinched again by currency devaluations against the U.S. dollar. Changes in the Colombian peso cleaved $0.16 out of per-share earnings last quarter, and the currency hasn't regained strength since then.

While PriceSmart can't control foreign exchange swings, it can improve operations by lowering its costs, passing those savings on to customers, and gaining market share through lower prices and a better shopper experience. CEO Jose Luis Laparte told shareholders in April that the company was focused on "working hard for our members to offer the best possible price on our merchandise."

Progress toward that goal will show up as improvements in the metrics of comps growth, membership income, and operating profit. That's why investors should watch those figures rather than focus on the nosier headline profit and revenue numbers when PriceSmart posts quarterly results later this week.