If everything goes according to plan, electric-car maker Tesla Motors (NASDAQ:TSLA) will deliver the first units of its Model X SUV late this summer -- probably in September. As the Model X launch approaches, investors are beginning to ponder the vehicle's potential.

It's virtually impossible to overstate the importance of the Model X to Tesla, because it currently only produces and sells a single vehicle: the Model S. Wildly successful in its own right, the Model S has set the bar high for Model X. Can the Model X live up to Tesla's last blockbuster?

Tesla's big bet on Model X
In line with his previous comments, Tesla CEO Elon Musk still believes Model X will be a game changer for the company. "With the Model X, there's potential to double Tesla's volume," Musk said in an interview this week with CNBC.

With more than 20,000 deposit-backed reservations for Model X, demand for the SUV is unlikely to be a problem in 2015. Model X sales this year, therefore, will probably depend entirely on Tesla's ability to ramp up production of the new vehicle -- a feat Musk admits makes forecasting difficult.

"And then the really big question, which we don't really know the answer to right now, is whether -- is how long it will take us to ramp that production," Musk said in the CNBC interview.

This uncertainty about Tesla's ability to ramp up production of Model X is consistent with previous comments from the CEO. But this ambiguity shouldn't lead investors to throw their hands in the air, and give up on at least speculating about a potential range for Model X sales. After all, the Model X is absolutely key in helping Tesla reach the cash flow levels needed to support further necessary investment in its $5 billion battery factory, and its planned lower-cost vehicle.

Potential Model X sales in 2015
Fortunately, Musk has been quite vocal about the potential for Model X production. Piecing Tesla management's comments together about Model X production ramp, investors can come up with a likely range of possible Model X deliveries for 2015. Consider this valuable commentary from management. 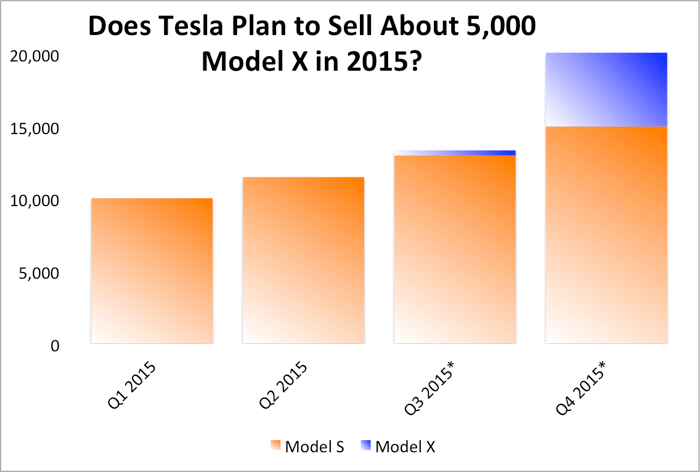 Commentary from Tesla management seems to suggest that Tesla is expecting anywhere between a few thousand Model X deliveries in 2015 to as many as 12,000. Unfortunately, attempting to further narrow the range of possible outcomes would be pointless. Investors should take Musk at his word when he says that even Tesla is unsure of the outcome.

During the company's fourth-quarter earnings call, Musk gave the best explanation of the complexity in predicting Model X deliveries amid the first few quarters of production ramp: "But because that production ramp just scales exponentially, depending upon where that exponential curve falls across a quarterly boundary, [the actual production ramp] can actually make quite a significant effect on the production and deliveries in that quarter."

For now, all the world has seen with regard to the Model X is the prototype version revealed several years ago, along with some sightings of beta Model X versions -- potentially production versions -- driving around Silicon Valley. But Tesla has yet to show the exact specs of the production version of the Model X, or even provide an inside look at the final version of the vehicle.

If Tesla begins deliveries late in Q3, as the company has suggested, it could be any week now that Tesla reveals the production version of the Model X, and begins letting customers configure the specifications of their orders.