What: Shares of Targa Resources Partners (NYSE: NGLS) dipped well into negative territory in June, dropping 12% last month primarily on the back of general weakness in the entire oil and gas industry.

So what: Lately, share price declines have been passed around companies in the energy space like the common cold at an elementary school. Targa Resouces was in some sense just another victim of broader market sentiment as the entire Alerian MLP Index -- the index that tracks the major master limited partnerships on the market -- dropped by more than 9% in the month of June. Considering that amount of decline in the overall market, it would be really hard for Targa to stand out from the crowd. 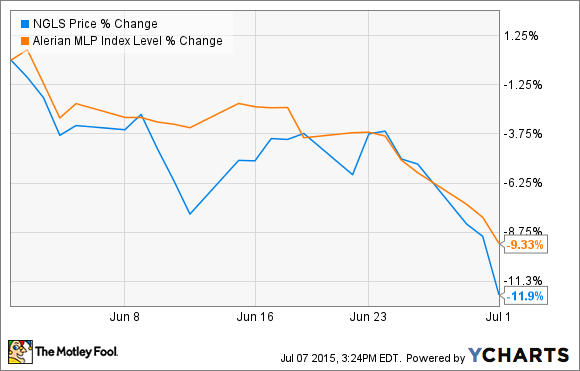 Companies in the midstream space like Targa are being dragged down by two primary drivers. The first is that oil and gas prices continue to remain low, which seems to have indiscriminately sent shares of any energy company on the decline regardless of whether cheaper prices are good or bad for them. The second is the fear that the Federal Reserve may raise interest rates, which isn't exactly music to the ears of debt-heavy companies like master limited partnerships that do best when interest rates are low.

Some of these elements could impact Targa directly, and others not as much. The one that does stand out, though, is commodity prices. Targa Resources generates about 65% to 70% of its gross margin from fee-based contracts and services that shield it from commodity price swings, which is a noticeably lower percentage of gross margin from fees than other midstream companies have, so Targa is a little more sensitive to natural gas and natural gas liquids prices than some of its peers.

Now what: Having a slightly higher exposure to commodity prices isn't always a bad thing, it just means the company's profitability is more variable than others in the space. Fortunately, Targa Resources has a pretty strong balance sheet on a net debt-to-EBITDA basis, so it's not as though today's lower-price environment is going to put the company in dire straits.

In fact, its financial health and management guidance that it will have enough distributable cash to cover all payments to unitholders for 2015 suggest that perhaps this is just a temporary blip that might be a good time for investors to put Targa Resource Partners on a short list of stocks to consider in the near future.