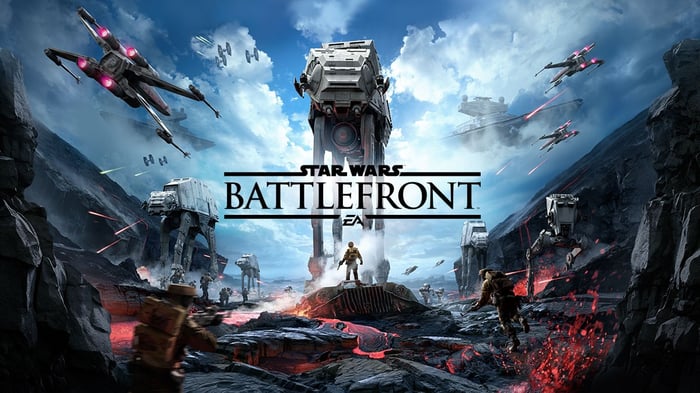 It will be another four months before Electronic Arts (NASDAQ:EA) releases its "Star Wars: Battlefront" game. But video game fans are already committing to the title in droves. The deluxe edition ranks No. 15 on Amazon's best-selling games list, ahead of currently available hits such as Activision Blizzard's (NASDAQ:ATVI) "Advanced Warfare" or Ubisoft's "Watch Dogs. Battlefront" retails for a steep $70, which also happens to be the price of EA's shares at the moment.

But investors might want to buy the stock instead of the game if they have to pick only one. That purchase could earn them a tidy 14% profit.

The upgrade
Despite a 100% rise over the last year, EA just won a new fan on Wall Street. UBS analyst Eric Sheridan upgraded the stock to "buy" this week while boosting his price target from $65 to $80. Sheridan's optimism centers around the "Battlefront" game, which he thinks will sell as many as 14 million copies, or 40% above management's forecast.

After all, the title just cleaned up at this year's E3 conference, collecting hefty awards, including "Best Action Game" and "Best Online Multiplayer." Preorder sales through Amazon seem strong, and they'll likely receive heavy promotion by retailer GameStop this summer and fall.

And if "Battlefront" does meet strong gamer demand, investors can expect substantial profit growth to follow. That's mostly thanks to the positive role that digital sales are playing in EA's business right now. The channel has spiked to $2.2 billion annually, up from $1.7 billion just two years ago. The biggest piece of that growth is from consoles, where EA can market add-on content and full game downloads.

The [add-on content] part of our business is growing dramatically. It not only extends the life of the game, but it also allows us to gain additional revenue on that life over time. And we find that what that also does is allows us to lower the cost of marketing to the next customer, because you're not paying a lot to reacquire someone; the customer is already playing.

Digital sales are the driving factor behind EA's huge profitability improvement. Gross profit is up to almost 70% of sales, pushing it past rival Activision Blizzard. 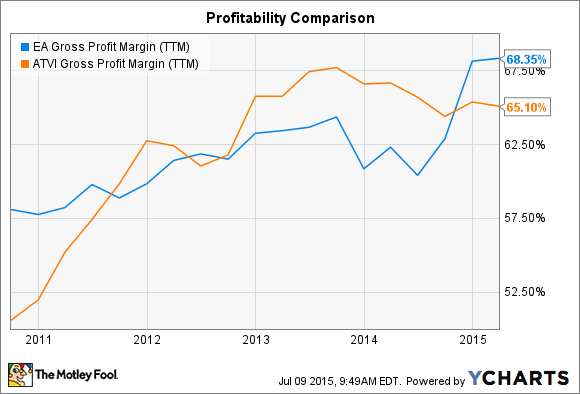 The payoff
Those improving economics are why Sheridan thinks EA can book $3.01 per share in profit this year. That estimate is significantly higher than Wall Street's collective judgment: The 21 analysts who cover the stock see earnings coming in at $2.85 per share. EA's management, meanwhile, is targeting just $2.75 per share for the year.

Still, UBS's stock price target seems reasonable. If the stock rose to $80 per share, it would be valued at 27 times that $3 profit figure. The current P/E valuation is 26 times, so we're not talking about a huge move.

It's never a good idea to bet on one title changing the fortunes of a video game publisher. After all, Take-Two recently managed the single biggest sales result ever for an entertainment property launch with "GTA V," yet the stock underperformed both EA and Activision.

Also, it's possible that "Battlefront" will stumble out of the gate, especially given all the build-up. A lot depends on how the game works once it gets into players' hands. EA had to eat crow for some recent glitchy releases, including "severely fumbling" the launch of "SimCity" in 2013. That kind of slip-up could always happen again.

Still, I think the upcoming "Battlefield" launch is a great extra reason to like EA's business in addition to, say, the 9 percentage point gross profit margin improvement since 2012. For my money, though, I still like Activision Blizzard as the better video game stock value at the moment.