GE is running, not walking, from the banking business.

In April of this year, General Electric (GE 1.30%) announced plans to sell off its giant finance business, GE Capital. In typical GE fashion, the company is wasting no time in executing that plan. As of March 31, GE Capital was the seventh largest bank holding company in the U.S., and at the end of next year, GE plans to have sold more than 80% of the unit.

To do that, the company will be selling off various finance businesses in large chunks, much like it did in a two-day span last month when it agreed to sell a European buyout unit and a huge portion of its fleet-finance business for a cool $9.2 billion combined.

Selling units hot and fast
On June 29th, GE agreed to sell its fleet-financing business to Element Financial Corp of Canada for $6.9 billion. The sale is comprised of the fleet financing business' U.S., Mexican, Australian, and New Zealand divisions. The business provides financing to companies for the purchase of cars and trucks, including more than 1.5 million vehicles leased and managed worldwide.

The sale requires regulatory approval from the nations involved, but GE expects the deals for each division to close in the third and fourth quarter of this year. Element previously purchased GE's Canadian fleet financing business in an unrelated transaction in 2013.

The next day, on June 30th, Sumitomo Mitsui Banking Corp. agreed to buy GE's European buyout lending unit for $2.2 billion. The sale includes the substantial majority of that business, with the only remaining parts related to joint ventures with other finance partners that must be separately negotiated.

A busy month for the industrial giant
GE's moves to eliminate its GE Capital subsidiary come as CEO Jeffrey Immelt steers the company bank to its industrial roots. After nearly 20 years of explosive growth in the finance business, the financial crisis nearly brought GE to its knees. After analyzing the risks involved in operating the unit and the rapidly changing regulatory and economic landscape, GE decided to change course and refocus its strategy on the manufacturing, industry, and energy businesses.

GE Capital CEO Keith Sherin said the finance division plans to sell $100 billion of assets in 2015, with the rest of GE Capital being divested by the end of 2016. To meet that goal, the company will have to continue signing big deals at an exceptional pace, much like it did on June 29 and June 30.

Earlier in June, the company also announced the $12 billion sale of its private equity lending business to the Canada Pension Plan Investment Board. In April, GE sold $24 billion of real estate assets to The Blackstone Group and Wells Fargo.

GE has already started buying new assets to support the industrial strategy, including its largest acquisition ever, the $15.6 billion deal to acquire the French engineering and power company Alstom SA. That deal remains in the balance, however, due to European regulatory concerns.

What investors should expect
When GE first announced the dramatic shift in strategy, investors sent shares of the stock rocketing skyward to near seven-year highs. Since then, though, the stock has given back about half of those short-term gains. 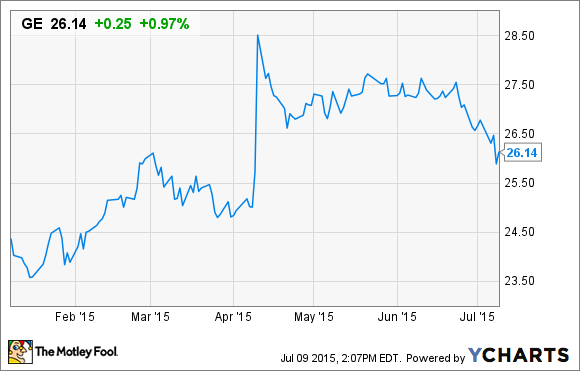 According to Immelt, GE plans to use most of the proceeds from these sales to fund a massive $50 billion share buyback. The rest of the proceeds will be used to invest in new industrial businesses, and expanding existing ones, along with paying taxes on the gains, and offsetting a large $16 billion restructuring charge.

Over the long term, an investment in GE today represents an investment in a simpler model for the conglomerate. The days of massive leverage and high-finance are quickly coming to an end for GE. The GE Capital of the future will exist solely to support the company's manufacturing businesses, providing loans and leases for equipment, energy, and aviation customers. The company will no longer be burdened by the "systemically important" tag, nor will it be "too big to fail."

From a risk perspective, investors should applaud all of these changes. The future structure of GE will certainly be more sound than the high-flying days of GE Capital in the mid-2000s. What is unknown is how effectively Immelt can steer the company to growth and higher profits without relying on the Wall Street style businesses that defined the company's rapid ascent under former-CEO Jack Welch.

It's still too early in the company's transformation to say with certainty how this shift will ultimately play out. However, Immelt's bet is that a simpler GE is a more valuable GE. So far, investors seem to agree.

Jay Jenkins has no position in any stocks mentioned. The Motley Fool recommends Wells Fargo. The Motley Fool owns shares of General Electric Company and Wells Fargo. Try any of our Foolish newsletter services free for 30 days. We Fools may not all hold the same opinions, but we all believe that considering a diverse range of insights makes us better investors. The Motley Fool has a disclosure policy.