Please ensure Javascript is enabled for purposes of website accessibility
Log In Help Join The Motley Fool
Free Article Join Over 1 Million Premium Members And Get More In-Depth Stock Guidance and Research
By Dan Caplinger - Dec 8, 2017 at 7:19AM

The stocks that this popular strategy chose will produce gains, but they probably won't be big enough to beat the Dow overall.

The Dow Jones Industrials (^DJI 0.42%) have had an incredibly strong 2017, with gains of 22% pushing the average above the 24,000 mark recently. That's been good news for many investors, but it has left some who've sought out market-beating strategies shaking their heads and wishing they'd just bought an index-tracking investment instead. One victim of 2017's success has been the Dogs of the Dow strategy, which emphasizes the most dividend-friendly stocks among the 30 components of the Dow. Despite often outperforming the broader average, the Dogs of the Dow are trailing by a hefty amount so far in 2017, and it's unlikely that there'll be enough time for the strategy to catch up in the last few weeks of the year.

The Dogs of the Dow are 10 stocks chosen from the 30 companies in the Dow Jones Industrials. The way this simple strategy works is that at the beginning of the year, dividend investors looked at all 30 Dow stocks and picked the 10 that had the highest dividend yields. They then invested an equal amount of money in all 10 stocks, with the intent to hold them throughout 2017. Those who expect to keep investing using the strategy will take another look at the Dow 30 at the beginning of 2018, seeing how their relative dividend yields changed and selecting a new top 10 to hold over the coming year.

Coming into this year, the Dogs of the Dow strategy had outperformed the broader average in six years out of the most recent seven. That left investors optimistic about the prospects for the Dogs in 2017. 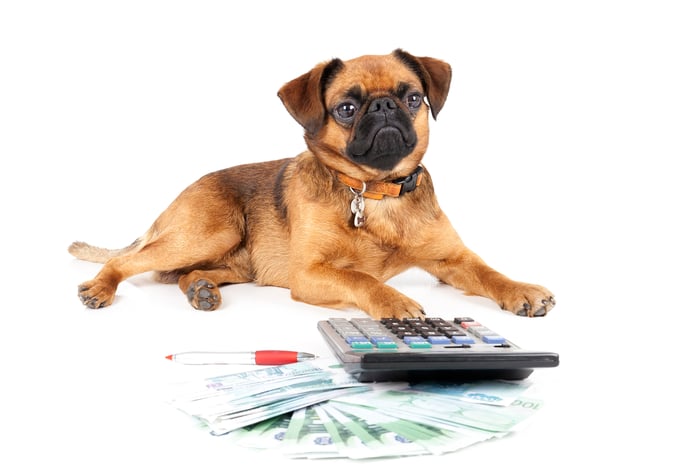 Unfortunately, the Dogs haven't been able to live up to their potential so far this year. With a more than 7-percentage-point lead, the overall Dow looks poised to finish ahead of the Dogs for the first time since 2014.

One reason the Dogs aren't doing well is that the strategy picked most of the companies that have turned out to be 2017's losers. Although the strategy dodged a bullet by not selecting hard-hit conglomerate General Electric (GE -0.24%), the other four Dow stocks that have lost ground in 2017 are all included in the Dogs of the Dow. In particular, the energy industry has managed to rebound as much as investors had hoped, and ongoing issues in the wireless telecommunications and pharmaceutical industries have hurt some other key Dow components.

What's particularly interesting is that the Dogs would be doing even worse were it not for the outstanding performance of two key stocks. Aircraft manufacturer Boeing (BA 0.84%) has led the Dow with a nearly 80% jump this year, led forward by huge demand for more efficient models and a healthy customer base in the airline industry around the globe. Caterpillar (CAT -0.58%) hasn't been quite as successful, but the heavy-equipment manufacturer's stock has jumped more than 50% as demand has returned from key sectors like energy, mining, and construction. Despite those winners, though, no other Dog stock has produced a return of more than 12%, whereas nine of the 20 non-Dog Dow stocks have returned at least 30% price gains so far this year.

At this point, many dividend investors are looking to the future. Even with a reduced dividend payout, General Electric is almost certain to join the Dogs next year along with Procter & Gamble, while Boeing and Caterpillar will most likely be the stocks to give way.

That will make the Dogs of the Dow look a lot different than they did in 2017. With its perennial value focus, the Dogs always do well when hard-hit dividend stocks manage to bounce back more than their peers. In 2017, the way the entire market did so well simply proved too much for the Dogs to surpass.