AT&T (NYSE:T) is on the cusp on of closing its deal to acquire DirectTV, and with the deal will come a surprising expansion of the company's fiber network network into existing areas dominated by cable companies. AT&T told the Federal Communications Commission that when the DirecTV deal closes, it'll open up additional money for the company to expand its fiber connections -- called GigaPower -- throughout the country.

In an investor note this week (first reported by Barron's), Moffett-Nathanson's Craig Moffett said AT&T plans to expand its fiber network to 11.7 million homes, making it "by far the largest fiber builder over the next five years or so."

That expansion would outpace Google's (NASDAQ:GOOG) (NASDAQ:GOOGL) fiber plans, and it could eventually mean your cable company may need to revamp its pricing plans. 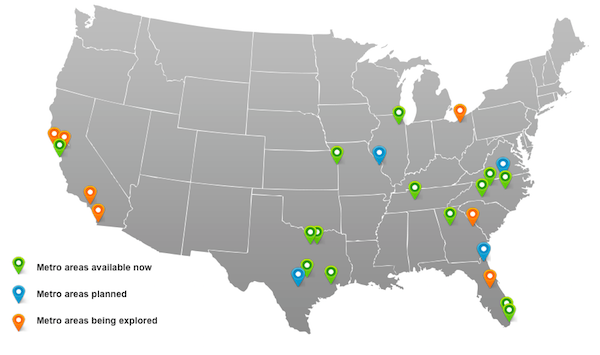 Why this matters
Right now, Internet service providers (ISPs) are mainly made up of cable companies like Time Warner Cable, Comcast, and others. You probably found this out whenever you initially signed up for Internet service and found that you only had one option to do so or, if you're lucky, two.

But if the A&T fiber expansion happens, it'll change the stranglehold many cable operators have in some regions. Moffett's says AT&T will increase the fiber overlap for Charter from 7% to 12%, Comcast will go from 18% to 22%, and the merged Time Warner Cable and Charter company will collectively rise from 17% to 21%.

More fiber overlap mean more options for customers, which we all know typically leads to lower costs for consumers. No company has proved this more in the fiber Internet space than Google. In the markets where Google Fiber exists, Time Warner Cable, Comcast, Verizon, and AT&T have all lowered their prices to match Google's, increased speeds, or both.

When can we expect the cable bashing to begin?
Whoa there, we're still a little ways off from that. First, the deal to acquire DirecTV has to go through, and while that may be just days away, it's not as if AT&T workers are standing in your neighborhood with shovels in hand, ready to get to work.

AT&T says its fiber expansion will take about four years to complete, but it could be a bit longer. ArsTechnica pointed back out in May that AT&T previously promised vast Internet expansion in order to gain approval to buy BellSouth about 10 years ago, yet it "offers little or no service to millions of people in the 22 states where it operates wireline facilities."

I hate to use "this time is different" logic, but I'm going to anyway. AT&T has every incentive right now to start building out its fiber network, even if if weren't using the expansion as a concession to the government. Google Fiber's push into new markets, offering cheaper and faster services than ever before, is forcing the hands of cable and telecom companies alike to keep up.

AT&T may have been able to make expansion promises in the past without the fear of other companies making similar moves, but now that Google is taking the fight to ISPs, AT&T really has no other choice than to join in.