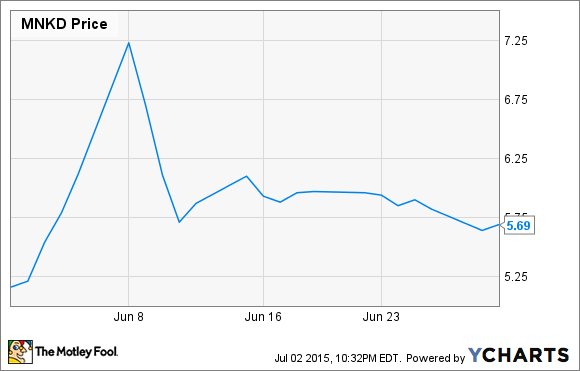 Shares of MannKind (NASDAQ:MNKD), a biopharmaceutical company focused on the development of therapies to treat diabetes, surged by 10% in June (per S&P Capital IQ) following positive analyst commentary and a likely short squeeze.

In mid-May, Jefferies analyst Shaunak Deepak suggested that once MannKind and licensing partner Sanofi begin advertising for Afrezza, sales of MannKind's inhalable diabetes drug should improve. Additionally, Deepak said he believes a lack of understanding regarding Afrezza among primary care physicians, based on his own nonscientific surveys, has impaired the drug's launch.

From nearly the moment Deepak issued his commentary through mid-June, MannKind's stock practically doubled. I suspect this was partly a function of Deepak's optimistic commentary, but also based on MannKind's high levels of short interest.

When investors are betting against a stock, or short-selling it, their losses are limitless while their gains are capped at 100%. Thus, when a stock begins to rise, short-sellers are often quick to hit the exits. When this happens and they cover their short positions by buying shares, the stock price is pumped even further. In other words, I believe we witnessed a classic short squeeze in June.

The question investors need to ask here is whether Deepak's positive commentary and a probable short squeeze merit the continuation of this rally.

On the surface, MannKind appears to have the tools it needs to succeed. The company has a first-in-class inhaled diabetes therapy that improves convenience for diabetic patients, is fast-acting, and leaves the body much faster than traditional diabetes therapies, thus reducing the potential for a hypoglycemic event. Plus, Sanofi, which has a rich history of launching prior blockbuster drugs, is marketing Afrezza.

But, thus far, Afrezza isn't living up to the hype. Afrezza's prescriptions are well off what Wall Street and investors would like to see, and Sanofi reported a meager $1.1 million in sales of the drug during its first quarter on the market (although, to be fair, it was not a full quarter).

There's also the issue of valuation, which has been a sticking point of mine on MannKind for months. Even if Afrezza becomes a $2 billion per year drug, MannKind's portion of its licensing deal only nets it $750 million annually in revenue. We've recently seen biotech mergers occurring for two to three times peak sales estimates for a company's lead drug or portfolio, which suggests a peak valuation of about $2.25 billion for MannKind, which is pretty much its current valuation. In short, MannKind might already be pushing its valuation envelope.

My suggestion? Keep your distance and let Afrezza's sales do the talking. If Sanofi and MannKind can address the drug's ramp-up issues, then perhaps you can consider buying on a significant dip.