What: Bob Evans Farms' (NASDAQ: BOBE) stock rose 11% during the month of June, according to S&P Capital IQ data. With that improvement, shares are roughly flat for the year, but 20% below the 52-week high they set in early March. 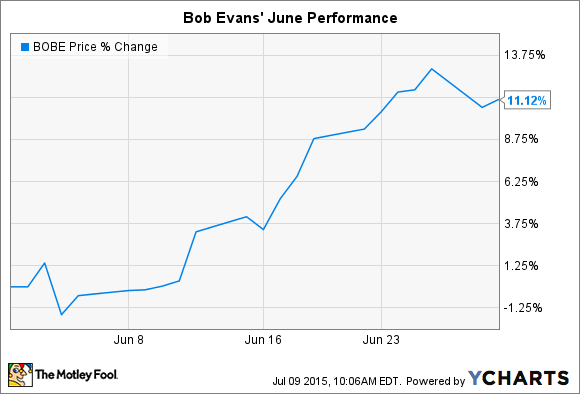 So what: Bob Evans in mid-June announced a surprisingly strong end to its fiscal 2015. The restaurant and refrigerated food company booked a 2% sales gain, to $332 million, which was just above Wall Street's $330 million revenue target. Bob Evans managed an even bigger beat on earnings, though. Non-GAAP adjusted profit came in at $13 million, or $0.56 per share. Analysts were expecting $0.41 per share of earnings on that basis.

However, the restaurant business continued to struggle in the fourth quarter. Comparable-store sales rose by 2.1%, representing a slowdown from the prior quarter's 3.8% gain. Bob Evans' management enacted price increases as part of its long-term strategy of reducing guest discounts. While that boosted margins, it apparently hurt customer traffic trends.

On the plus side, Bob Evans' food business got a big shot in the arm from lower commodity prices -- especially pork. Pig prices dove, helping the company reap $11 million of cost savings on sausage production. Those savings translated into operating income of $14 million for the food division, compared to $3.3 million a year ago.

Now what: Bob Evans investors can expect lots of change during the next few quarters. Management is enacting a complicated turnaround strategy for the restaurants that includes cutting food costs, revamping the menu, raising effective prices, and decreasing labor expenses. The end result should be "profitable same-store sales growth with a significantly lower guest discount rate than the company employed for the last two years," Chief Financial Officer Mark Hood explained in a press release. At the same time, Bob Evans is busy shedding underperforming restaurant properties and using the proceeds to buy back its own stock. The company is also searching for a new chief executive.

All of that adds up to uncertainty for investors around the operations of this business. But shareholders can generally expect increasing cash returns and higher profitability -- as long as comparable-store sales continue to grow.